The Dallas Cowboys take on the Tampa Bay Buccaneers in an NFC wild-card matchup that projects to be a close game.

Dak Prescott is coming off one of the worst games of his career, but Dallas has clearly been the better team throughout the season.

It will be interesting to see if Tom Brady can elevate his game like he always does in the postseason.

We’re in for a treat with this one, so let’s take a look at the best Dallas vs Tampa Bay parlays for this NFC Wild Card Weekend matchup.

NFL Wild Card odds used in these parlays are current as of Friday, Jan. 13, at Caesars Sportsbook. 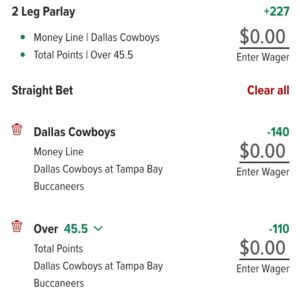 Again, the Cowboys (12-5) have been a much better team than the Bucs (8-9) this season. Tampa Bay has consistently been overvalued by oddsmakers, finishing with a 4-12-1 record against the spread.

Yes, they have Brady, but he’s coming off his worst season since 2002, averaging only 6.4 yards per attempt. This is an offense that struggles to generate big plays downfield.

The Bucs are also highly inefficient on the ground, ranking 30th in Rush DVOA, per Football Outsiders. That’s bad news against a Cowboys run defense that ranks fifth in the NFL.

We’re likely to see Brady easily eclipse 40 pass attempts as he continues to dink and dunk down the field while dealing with an elite Cowboys pass rush.

We’ve also seen the Cowboys put up points at a high rate. If we remove the Week 18 loss where they had nothing to play for, they’ve combined for 327 points in their last nine games.

That’s an average of 36.3 points per game, making it hard to feel comfortable taking an Under in this one. As an added bonus, the Over has a strong correlation with the favorite against the spread. 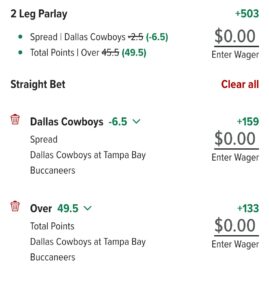 For our longshot parlay, we’ll tease the spread and Over to a more challenging number for a chance at a better payout.

When the Cowboys win games, it’s usually by a greater margin of victory. In fact, seven of their last 10 wins have been by double-digits.

If Dallas is able to win by seven or more, it’s likely the total flies Over as well, making it a good idea to add in Over 49.5 points for this NFL parlay.