The NBA regular season is just weeks away, which means your fantasy basketball draft is coming down the pike as well.

If you’re looking for guidance with your upcoming draft, I’m here to help. Here is my full top-200 fantasy rankings and players to strongly consider when your hoops draft happens.

NBA DFS Play of the Day

Searching for a new NBA DFS site? when you sign up for FanDuel DFS and deposit $10 today.

Read our FanDuel DFS review for more insight and get your welcome bonus below.

We all know the point guard conversation begins with Luka Dončić, who averaged 28.4 points, 9.1 rebounds, and 8.7 assists per game and willed the Dallas Mavericks to the Western Conference Finals a year ago. He should be among the top players selected in your league.

James Harden restructured his contract to give the 76ers more cap flexibility and should be poised for a monster year. Harden is still in the show-me phase in Philly, and with Joel Embiid as his running mate, he should be considered the second-best point guard in the game.

Much of the stress will be off of Trae Young‘s shoulders from a scoring perspective, with Atlanta acquiring Dejounte Murray from the San Antonio Spurs. Young’s assists should be up, even from his 9.7 per game average in 2021-22, but his scoring may take a hit with Murray splintering off some of his shots.

So much gets made of Kyrie Irving‘s availability — and deservedly so since he was a part-time player in 2021-22 and has shown a penchant for disappearing during the regular season — but Irving should be counted on to deliver full-time in 2022-23 now that his COVID-19 vaccine status is a moot point.

Those who follow the league know the Russell Westbrook experiment in Los Angeles was a nightmare in 2021-22, but he was still highly productive, averaging 18.5 points, 7.4 rebounds, and 7.1 assists per night, even though that constitutes a down year. I think Westbrook will feel slightly more comfortable in Year 2 with the Lakers.

The Knicks made no secret of their desire to bring Jalen Brunson over from the Dallas Mavericks. Although New York’s roster has holes, Brunson is an upgrade from the aging Derrick Rose and 23-year-old Immanuel Quickley, who New York seems unconvinced can be a starting floor general.

Darius Garland led the Cleveland Cavaliers in both scoring and assists per game and had them on the verge of a playoff spot until injuries did them in. Finally, we are waiting to see what Ben Simmons has when he someday takes the floor as a member of the Brooklyn Nets.

The drama surrounding Simmons’ playing status has distracted from the fact he’s averaged 15.9 points, 8.1 rebounds, 7.7 assists, and 1.7 steals per game over his NBA career. There’s buy-low value there.

So much of the NBA offseason has focused on superstars changing teams after blockbuster trades, and the Murray to Atlanta deal feels like it flew under the radar. He’s a bona fide stat-padder, averaging almost a triple-double per game (21.1 PPG, 9.2 APG, 8.3 RPG) last season in San Antonio.

He’s going to form an elite backcourt tandem with Young and should complement a sterling group of role players, like big man Clint Capela, to make Atlanta a force in the East. Murray should be high on your radar when drafting in the first round.

Donovan Mitchell‘s value may be diminished a bit now that he’s playing with other top-tier scorers in Cleveland, but he remains one of the league’s go-to guys in this category.

The Timberwolves were one of the feel-good stories of the 2021-22 season, largely due to Karl-Anthony Towns and Anthony Edwards. Edwards finished second on the T-Wolves in points per game in 2021-22 (21.3), and the top pick of the 2020 draft should continue to elevate his game in his third year in Minnesota.

If you’re looking for a sleeper, Malik Beasley is one worth taking a flier on. Beasley, who Utah acquired in the trade that sent Rudy Gobert to Minnesota, is still just 25 and is only one season removed from averaging 19.6 points per game. 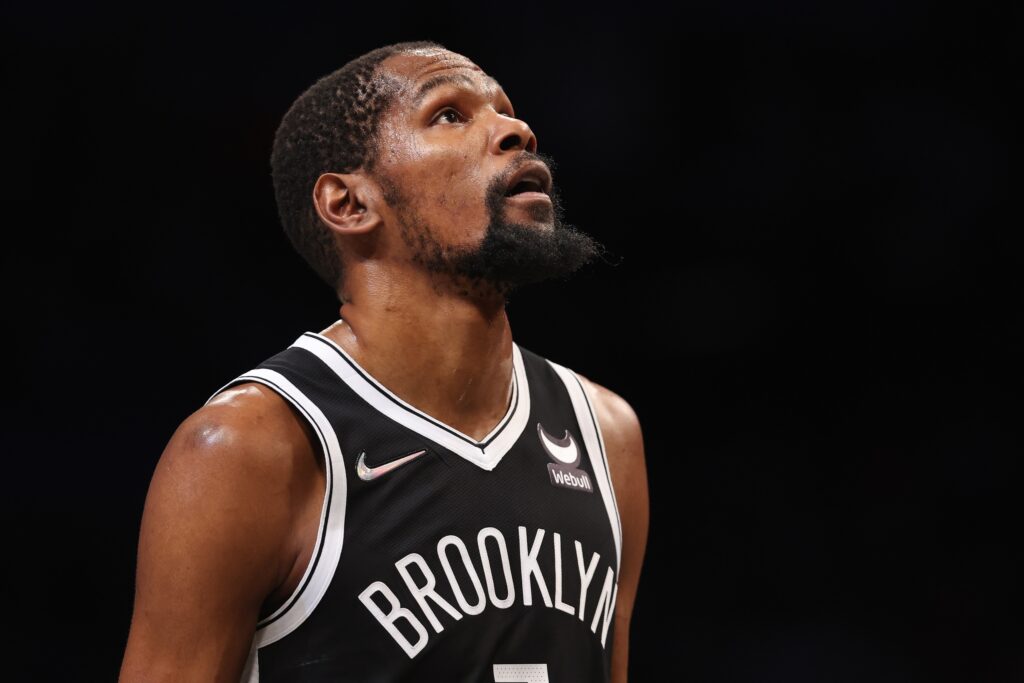 Now firmly back in Brooklyn, Kevin Durant will be a huge player in the fantasy space this season. (Image: USA TODAY Sports)

Kevin Durant is back in Brooklyn for good, which is great news for fantasy managers. Durant, even at 33, remains one of the game’s most dynamic scorers and is sure to fill up the stat sheet night after night this season.

Durant aside, I’m also intrigued to see what Boston Celtics forward Jayson Tatum has in line for his sixth season. Tatum has surpassed his previous season’s points, assists, and rebounds per game every season in the NBA and finished seventh in scoring, 27th in rebounding, and T-40 in the NBA in assists per game while leading Boston to the Finals.

Most of the focus gets shined on the Lakers when discussing basketball in LA, but the Clippers demand attention too. Kawhi Leonard missed the entire 2021-22 season with a knee injury, and even though there’s a ton of mileage on his odometer, he’s averaged 26.2 points, 7.0 rebounds, and 4.2 assists over the last three seasons.

Leonard’s return will undoubtedly have an adverse impact on Reggie Jackson‘s value, who was LA’s second-leading scorer, and often its alpha since top point-producer Paul George missed all but 31 games with an elbow ailment in 2021-22.

Khris Middleton‘s injury doomed any chance of a Milwaukee repeat, but he should be healthy and penciled in for 20 points, six rebounds, and five assists every night for Milwaukee.

Somehow, Giannis Antetokounmpo continues to get better with age and with the physical toll that continues to get put on his body. He’ll undoubtedly be among the top players picked in your fantasy draft, and barring an injury, should be counted on for 30 points, 11 rebounds, and seven assists — plus at least a couple of blocks and steals — every night.

Gobert’s presence in Minnesota should give Karl-Anthony Towns some power forward eligibility, which would make him the second-best 4 entering the 2022-23 season. Towns led Minnesota in scoring and rebounding but at times looked like he was trying to do too much during 2021-22.

I’m intrigued by Domantas Sabonis‘ presence in Sacramento since he is expected to be the second option, and chief rebounder, behind De’Aaron Fox. Someone needs to produce for the Kings each night. It should be him.

The Orlando Magic should be much-improved this season, with their roster full of high draft picks, and I am mostly interested in seeing how Paolo Banchero‘s game translates to the next level. He averaged 17.2 points and 7.8 boards in his lone season at Duke and showed good mid-range ability.

The conversation at center begins and ends with the top player in the league, Nikola Jokić, who is coming off of his second straight MVP award. Jokić will likely be the top pick of your draft, so congrats if you luck into the No. 1 selection.

Joel Embiid was the MVP front-runner for much of the 2021-22 campaign, leading the NBA in scoring while also averaging almost 12 rebounds per game. He should be poised for an enormous, MVP-caliber season with a full season of James Harden running point in Philadelphia.

So much was made of the Westbrook-Lakers saga that it gets forgotten that Anthony Davis‘ rash of injuries is what actually doomed Los Angeles’ season. The Lakers were 16-26 without Davis last season, and although he’s missed time each of the past two seasons, Davis is still a machine when he’s in there.

Christian Wood went from journeyman to productive rotation piece, averaging a double-double per game over his 109-game tenure with the Houston Rockets. He should be poised to produce again in Dallas, where Luka Dončić will be distributing the ball.

Brook Lopez‘s productivity will wane someday, but the veteran center should be considered as a depth big man as long as he can get on the floor for more than 13 games in 2022-23.