At this point of the postseason, every game is must-see TV.

However, the headliner of Conference Championship weekend will see the Cincinnati Bengals visit the Kansas City Chiefs in a rematch of last year’s AFC title game.

There always seems to be plenty of offense when Joe Burrow and Patrick Mahomes meet up, so this game could provide us with a great chance for same-game parlay success.

Below, I’ve picked out two of my favorite Cincinnati vs Kansas City parlays for this AFC Championship Game rematch.

NFL AFC Championship Game odds used in these parlays are current as of Tuesday, Jan. 24, at BetMGM Sportsbook. 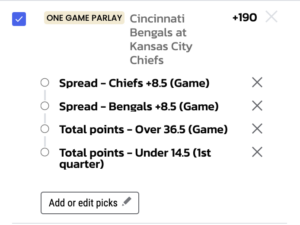 I’m not going to deny it, this parlay looks pretty weird.

However, there is some logic behind it, so hear me out.

To start things off, I have teased both teams up to 8.5-point underdogs. Since the spread has flip-flopped over the course of the week, with both teams taking turns as slight favorites, I’m pretty comfortable making this a one-possession game.

As we know, all three meetings between Mahomes and Burrow have been decided by exactly three points, and I don’t see either side running away with this one.

For the final two legs, I have teased down the Over for the full game and teased up the Under for the first quarter. Both teams played in games that had 14-point first quarters during the divisional round, but getting the hook here should be enough to evade trouble.

I also think there will be a bit of a feeling-out process in this game, especially as Mahomes works through his high ankle sprain and Kansas City tests Cincinnati’s retooled offensive line.

While I’m not confident enough to take the full-game Over in the mid-to-high 40s, I do think these offenses will eventually get to the 20s. The Chiefs have scored 20-plus points in all but one game this season, and the Bengals have reached that mark every time during their current 10-game win streak.

If we get a similar game to the one these two played in the AFC Championship last time around, this parlay should hit. 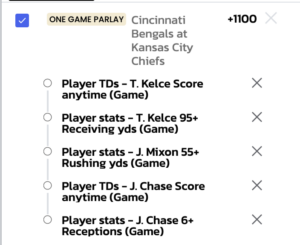 OK, that looks better. This more traditional Bengals-Chiefs same-game parlay capitalizes on some of my favorite NFL prop betting plays for this matchup.

On the Chiefs’ side, I don’t see a reason to deviate away from Travis Kelce. In the divisional round, the Jaguars knew the league’s top tight end was going to get the ball and they still couldn’t stop it.

Kelce and Mahomes have an elite connection that really springs to life in the postseason when the games matter the most. The 33-year-old has racked up 95-plus receiving yards in each of his last seven playoff games and added a touchdown in all but one of them.

On the Cincinnati side, I’m expecting Bengals coach Zac Taylor to try to establish Joe Mixon early in an attempt to slow down the Chiefs’ pass rush. The Oklahoma product ran for 100-plus yards and a score last week against the Bills and should be productive against a Kansas City defense that will be more preoccupied with slowing down Burrow and Ja’Marr Chase.

However, as is the case with Kelce, it’s pretty tough to take Chase out of the game entirely. He can run any route on the tree and is dangerous near the line of scrimmage and down the field. Plus, his LSU connection with Burrow has only continued to grow during their short pro careers.

Chase has scored in three of six career playoff games, including both so far this postseason, and leads this talented receiving core in targets. He should get plenty of opportunities to make an impact on this game and help us cash our longshot parlay.