The 2022 NFL season is almost here, so let’s look at our favorite futures bets. Sportsbooks are offering terrific new-player bonuses, making it a good idea to take a shot on a futures pick at long odds for that nice payout. Today, we’ll be taking a look at the Chicago Bears, who look to show some growth under a brand new coaching staff.

We’ll be providing a few promos from some of the top sportsbooks in Illinois while guiding you with some wagers to make the most out of this bonus. Why not try for a nice payout with a few longshots? Let’s dive in to see the best options for the Bears.

Sign up at Caesars Sportsbook using the code to receive your first bet on Caesars, up to $1,250, plus 1,000 Tier Credits and 1,000 Reward Credits! Create your account today to get this exciting welcome offer.

The Bears are currently in rebuilding mode under a new coaching staff with a limited supporting cast. Quarterback Justin Fields has potential, but his pass-catchers only include Darnell Mooney and Cole Kmet. There really isn’t much depth in this offense.

Chicago’s best course of action would be to play extremely run-heavy, especially considering Fields’ rushing ability along with a strong backfield that features David Montgomery and Khalil Herbert. This type of approach would result in a slow-paced, methodical offense that won’t be playing in many shootouts.

This makes (+700) odds a strong bet for the Bears to finish as the lowest-scoring team. While I do think that we’ll see offensive improvements now that Matt Nagy is gone, I love the value on a team that will play at a snail’s pace this season.

New bettors at BetMGM Sportsbook can get up to $1,000 as a risk-free welcome bonus. Use promo code to get this special offer now.

The Bears can be an improved team this season and still lose all six of their games in the NFC North. That’s due to the other divisional teams getting better over this offseason. While the Packers lost Davante Adams, they should still remain contenders with Aaron Rodgers. The key here is to look at the Vikings and Lions.

Minnesota looks like a dark horse Super Bowl contender for one simple reason: an upgrade on the coaching staff. Kevin O’Connell brings a refreshing look to the offense, coming over from the Rams and working with Kirk Cousins back when they were in Washington. Mike Zimmer’s outdated offensive philosophy held back the Vikings for years.

The Lions can surprise people this season, as they have a terrific offensive line with a great supporting cast that includes D’Andre Swift and Amon-Ra St. Brown. The defense should be better with the addition of rookie edge-rusher Aidan Hutchinson. Detroit should give Chicago fits this season, making this longshot prop firmly in play with good value at (+1000) odds. 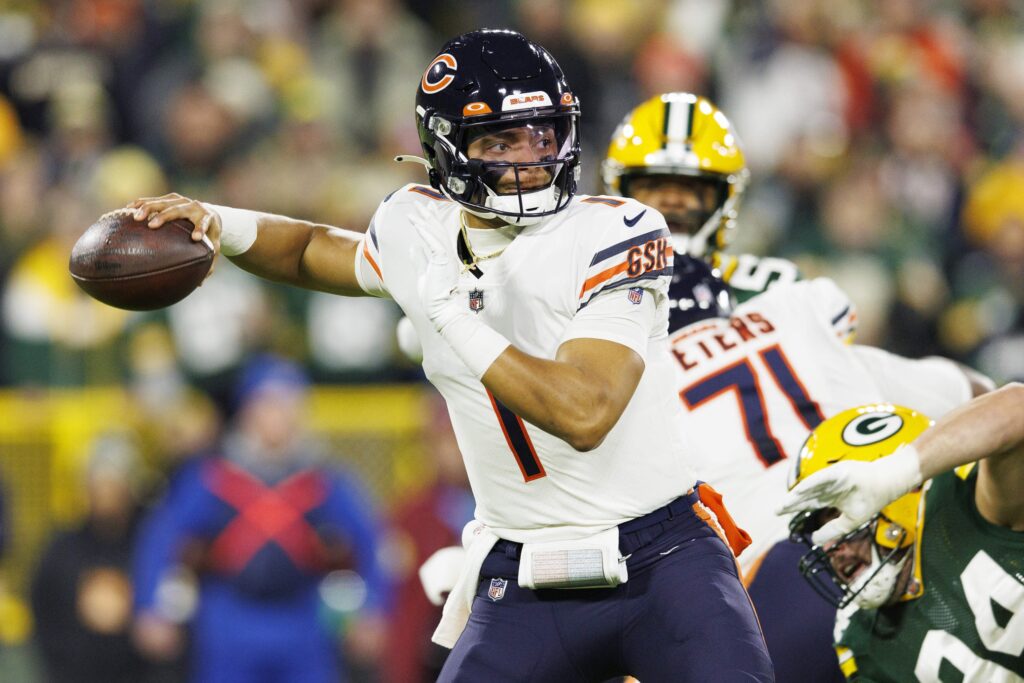 New bettors at BetRivers can get up to $250 as a first deposit match. Use The Game Day’s Bears sportsbook cash bonus code to get yours now.

This one is a total longshot, but let’s go with one of the best linebackers in the league and leader of the Bears’ defense. Let’s imagine that Chicago’s defense emerges as one of the best in football. If that’s the case, there’s a great chance that it’s partly because Roquan Smith has a big year.

While this award has gone to pass-rushers in recent years, we’ll take a stab at Smith bringing back memories of Brian Urlacher in Chicago at (+6600) odds. The fifth-year linebacker could see a leap in production under new coach Matt Eberflus, who just finished coaching another stud at the same position in Darius Leonard in Indianapolis.

If Smith can rackle up tackles with a few sacks and turnovers, you never know. Why not take a shot on him at 66-to-1 odds, which amounts to 1.49% implied probability. It’s worth a look with your BetRivers bonus.

Read our hands-on BetRivers review to learn more about this sportsbook.

New signups at DraftKings can get $150 FREE when they , create an account using promo code GAMEDAY150, deposit at least $5, and place a $5+ wager on a pregame moneyline in any sport as their first bet. If that bet wins, receive eight (6) $25 free bets, totaling $150.

Instead of taking the Bears to finish last at (+130) odds, we’ll take a shot at more value by attempting to nail down the exact order of the NFC North. We’ll bet on a Vikings leap under O’Connell and a Packers decline after losing Adams.

The Lions have a much better offensive line and pass-catchers than Chicago, putting them firmly ahead of the Bears in the NFC North pecking order. Fields will need to take a leap for the Bears to finish third or higher in this division.

This division is much stronger this season, so even though the Bears may be better without former coach Nagy, it might not result in much of a difference in their final result. At (+1000), this is absolutely worth a look.

Learn more about DraftKings with our hands-on review.