The NFL season is in full swing, so it’s time to look at the top Week 2 NFL parlays. It’s still early enough in the season to beat the market and target mispriced teams.

In this article, we’ll dive into the best football parlay bet along with a longshot and Same Game Parlay for Week 2.

Let’s get right into it and look at the best bets. 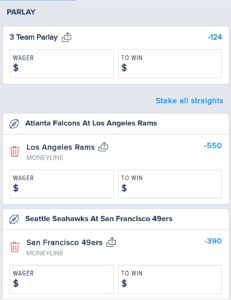 The Los Angeles Rams have had 10 days to get over their disappointing Week 1 loss against the Buffalo Bills. They have an exploitable matchup at home against the Atlanta Falcons, who are considered one of the worst teams in the NFL.

Look for running back Darrell Henderson Jr. to have a strong game in this one.

Kick off your football betting: FanDuel Sportsbook is offering a welcome promotion.

and start betting on football — including Kansas, which has just launched.

Get to know one of our favorite operators: Read Chris Wassel’s hands-on FanDuel Sportsbook review. Then, continue reading about our best Chiefs odds and props for the 2022 NFL season.

The San Francisco 49ers also opened up their season with a loss, falling short on the road to the Chicago Bears. We can give them a pass for this game, as the rainy weather impacted the field conditions. Expect Trey Lance to turn in a much better matchup at home against a Seattle Seahawks defense that allowed 340 passing yards to Russell Wilson.

The Denver Broncos gave away the game in their Week 1 loss, racking up ill-advised penalties along with two fumbles at the opposing one-yard line. They should get back on track against the Houston Texans. Denver’s offense should be able to move the ball at will against this Houston defense. Looking at a big game from Javonte Williams. 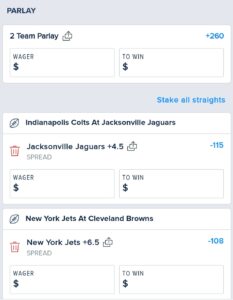 The Jacksonville Jaguars blew an eight-point fourth-quarter lead after the Washington Commanders scored 14 unanswered points in Week 1. This is still a team that looks headed on the right track. They’re getting too many points at home to the Indianapolis Colts, who just tied to the Texans. Look for Jacksonville to integrate Travis Etienne Jr. into the offense more, as he’s an absolute weapon.

The New York Jets struggled on offense in Week 1, but there’s no way anyone should feel confident laying 6.5 points with Cleveland Browns’ quarterback Jacoby Brissett, who missed several throws in their Week 1 win against the Carolina Panthers. New York has a lot of talent on offense, namely Elijah Moore, Garrett Wilson, and Breece Hall. Look for a better showing this time around. 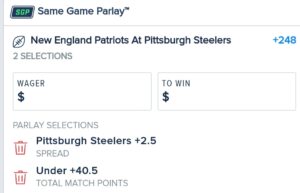 The Pittsburgh Steelers’ defense was absolutely dominant in Week 1, sacking Joe Burrow seven times while also forcing five turnovers. While T.J. Watt is out for this game, that loss is mitigated by the New England Patriots offensive struggles. New England has looked out of sync under play-callers Matt Patricia and Joe Judge.

Pittsburgh didn’t look great on offense either, as Mitch Trubisky needed 38 pass attempts for 194 yards. That’s an abysmal 5.1 yards per attempt. It’s likely that this will be a low-scoring game between two stout defenses. We’ll add the Under here because it’s a much safer play than the Over.