The game with the largest spread over Wild Card Weekend will see the Buffalo Bills host the Miami Dolphins in an AFC East showdown on Sunday, Jan. 15.

With rookie third-string quarterback Skylar Thompson expected to start for Miami, oddsmakers aren’t giving the visitors much of a chance. As of the time of writing, Buffalo is a 13-point home favorite for this opening-round contest.

While the game may end up being a bit of a bore, we can try to spice things up with our favorite Miami vs Buffalo parlays for Sunday’s game.

NFL Wild Card odds used in these parlays are current as of Wednesday, Jan. 11, at BetMGM Sportsbook. 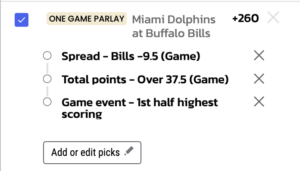 The Bills are heavy favorites in this game, and for good reason.

Buffalo boasts one of the most dynamic offenses in the league, with the combination of Josh Allen‘s dual-threat ability and size making him nearly impossible to defend. The Bills quarterback has had plenty of success against Miami’s defense this season, racking up more than 700 passing yards and throwing six TD passes across two regular-season meetings.

I don’t expect the Dolphins to have an answer defensively for Allen and his talented arsenal of pass-catchers, and unfortunately for Miami, it’ll be tough to keep up without starting quarterback Tua Tagovailoa (concussion).

Mike McDaniel will have to scheme up ways to get the ball to his talented playmakers in Tyreek Hill and Jaylen Waddle, who are more than capable of hitting big plays. However, with Thompson under center this season, those have been few and far between.

The Bills routed another AFC East rival, the Patriots, in the wild-card round last year, winning 47-17 in a game where they never punted. I wouldn’t be surprised if Buffalo has another peak offensive performance and clears this teased-down Over on its own accord.

I think it’s pretty reasonable to pair the Over and Bills -9.5, but adding the first-half prop gives us some extra juice if Buffalo races out to a huge first-half lead and then takes its foot off the gas. 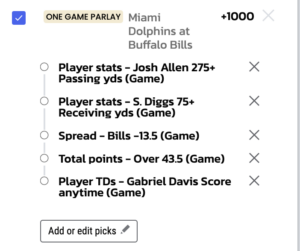 This isn’t a regular-season game, so I don’t see Buffalo pulling its starters until this contest is well and truly decided. That has me feeling pretty comfortable about pairing the spread and the Over once again, with the Bills likely to run up the score against a division rival.

Allen should continue to do a lot of his work through the air, as Miami’s defense ranks 27th in DVOA against the pass and is a top-five unit against the run. In crunch time, Allen usually looks toward his top target Stefon Diggs, who has gone Over 75-plus receiving yards in 10 of 16 games this season.

Lastly, I’ll take a chance on last year’s postseason hero Gabriel Davis to find his way back into the end zone on Sunday. Davis hauled in five touchdowns in Buffalo’s two playoff games, including four in the divisional-round thriller against the Chiefs.

The 23-year-old matched a season-high with 10 targets in the Bills’ Week 18 win over New England and should have plenty of opportunities to make a splash play.