Merry Christmas, everyone! It’s almost time for the NFL playoffs, so we need to make sure to continue targeting teams that are still in contention.

Let’s build on this result in our Christmas NFL parlays.

NFL Week 16 odds used in these parlays are current as of Wednesday, Dec. 21, at Caesars Sportsbook. 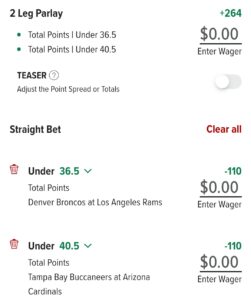 The Denver Broncos take on the Los Angeles Rams in what’s sure to be an ugly offensive game.

Russell Wilson is back at quarterback for the Broncos, but that doesn’t mean much, considering how poorly he’s played this season.

The Rams have failed to score more than 20 points in seven of their last eight games.

It’s hard to see Baker Mayfield having much success against the No. 1 team in Pass DVOA, according to Football Outsiders.

The Tampa Bay Buccaneers continue to lead the NFC South despite their mediocre 6-8 record.

The good news for them is they’ll take on an Arizona Cardinals team that is currently on a four-game losing streak.

Arizona is down to their third-string quarterback in Trace McSorley, as Colt McCoy is currently out with a concussion.

It’s going to be tough for the Cardinals to have much success on offense against the Bucs, who rank ninth in total DVOA on defense.

We’ll roll with the Under to finish off our parlay NFL pick of the day.

The Green Bay Packers still have a chance to secure a wild-card berth in the NFC. They’ve put themselves in this position by winning three of their last five games.

During this stretch, they rank first in overall DVOA, ahead of teams like the San Francisco 49ers.

While they’re in a tough spot against a prolific Miami Dolphins offense, there’s enough value to roll with Aaron Rodgers and co. here.

It’s an added bonus that he finally has Allen Lazard, Christian Watson, and Romeo Doubs finally playing at the same time.

We’ll add the Los Angeles Rams to knock off the Denver Broncos in what may be the ugliest game of the NFL season.

The main reason here is that the Rams have a significant coaching advantage with Sean McVay over Nathaniel Hackett. They’re also playing at home, giving them another boost.

The Broncos have no business being favored on the road with how they’ve played this year, so we’ll ride with the value on the Rams. 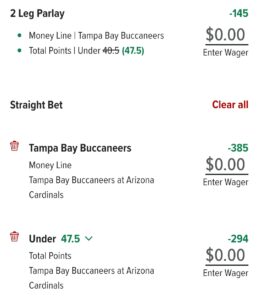 Our Same Game Parlay on Christmas will be similar to a teaser.

We’ll ride with the Bucs on the moneyline. It’s tough to feel confident in them covering the spread as road favorites with how erratic they’ve been this season.

Adding seven points to the total makes it a much more favorable number at 47.5.

I can’t see the Cardinals putting up enough points to push this Over the number, especially if McSorley is forced to start in this one.

While the -145 odds aren’t great here, this looks like an easy win. I can’t see the Bucs losing to the lowly Cardinals.