First place in the NFC South will be on the line in Week 2 when the Tampa Bay Buccaneers visit Caesars Superdome to take on the New Orleans Saints. Kickoff is scheduled for Sunday, Sept. 18 at 1 p.m. ET.

The Bucs leaned on the strength of their defense in Week 1, limiting the Dallas Cowboys to just three points and 244 total yards in a 19-3 road win. Meanwhile, the Saints used a 17-point fourth quarter — fueled by a pair of Michael Thomas touchdown catches — to earn a come-from-behind victory over the Falcons.

Who will emerge from this matchup with an unblemished record?

Let’s dig into our Tampa Bay vs New Orleans best bets and predictions to find out.

Despite losing their last seven regular-season games against the Saints, the Buccaneers have been installed as 2.5-point road favorites. The total is currently set at 44.5 total points, which is near the average of this Week 2 slate.

Take a look at the best Buccaneers odds and Saints odds for the 2022 NFL season.

After beating the Falcons by one point in Week 1, the Saints are expected to come out on the losing end of another close contest. The Buccaneers mustered just 19 points in their season opener, but Tom Brady and the offense should turn some of those field-goal drives into touchdowns in Week 2.

Buccaneers vs Saints Pick of the Day

Read more on this Buccaneers vs Saints bet below.

Chris Godwin’s return from a torn ACL didn’t last long as the Buccaneers wide receiver suffered a hamstring injury last week and will likely miss this matchup. Expect Brady to heavily target Julio Jones and Mike Evans, who combined for eight catches, 140 receiving yards, and a touchdown in Week 1.

Saints running back Alvin Kamara picked up a rib injury against the Falcons, but it isn’t expected to be too serious. There’s a good chance he’ll suit up Sunday.

Saints quarterback Jameis Winston will get another shot at his former team after tearing his ACL in the first meeting between the two last season. Taysom Hill, who ran for 81 yards and a touchdown on four carries in Week 1, started the second matchup — a 9-0 New Orleans victory.

While the Saints’ defense is no slouch, it is a bit surprising to see Brady struggle so much in his four regular-season meetings against New Orleans. Dennis Allen, the mastermind of that defense, is now the head coach, so realistically it could be tough sledding for Brady and the offense.

Then again, New Orleans allowed 416 total yards in the opener to an Atlanta offense that many (myself included) weren’t expecting much from this season. The Falcons racked up over 200 yards on the ground, which could mean Leonard Fournette will find more success after averaging 6.0 yards per carry in the opener.

Week 1 was a profitable week for Unders, which went 11-5, while favorites were 9-7 against the spread. Neither team was particularly profitable in this spot last season. New Orleans was 1-3 ATS as a home dog, while the Bucs were 3-6 ATS as road favorites.

Maybe I’m a sucker for taking the public side in this game, but the Buccaneers are the better team and this Brady voodoo against New Orleans has to end at some point.

Tampa Bay’s defense outshined its offense in Week 1, but I’m expecting a better effort from Brady — especially in the red zone — in this one.

Before placing this bet, get the best Tampa Bay Buccaneers promo codes.

The Bucs’ defense took advantage of a Cowboys offense with limited weapons in Week 1. And while New Orleans has more to offer on the outside, the Saints are still in the early stages of a system change after the departure of Sean Payton and Winston is still building chemistry with his new playmakers.

Get the best New Orleans Saints promo codes before making this wager. 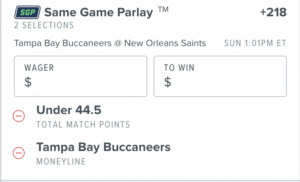 Backing Unders on a fast track is a scary proposition, but I think this game will be a defensive battle. Unders hit at a 57.1% clip in Saints home games in 2021, and I think we’re in store for another one in their 2022 home opener.

My main concern is that Winston gets back in his old habit of throwing a pick-six or two and this total flies Over.