The first game of an NFL season has typically involved the defending Super Bowl champion and a team that made a deep run in the playoffs the previous year. Count 2022’s NFL Kickoff game in this group too.

While Buffalo failed to reach last year’s AFC Championship Game, they were downed in the previous round in a wild, historic, back-and-forth clash with the Kansas City Chiefs.

This Week 1 showdown of elite NFL teams will pique the interest of football fans and bettors alike. Read on for our Buffalo vs Los Angeles best bets for the first game of the new NFL season.

It’s a bit surprising to see the defending Super Bowl champions be a slight home underdog in the first game of the season. That rarely happens and it seems a bit strange considering how much talent the Rams added to their roster this offseason.

The Bills are the current favorite to win Super Bowl 57, so it does make some sense. However, they’ve started out slow in Week 1 the past few years and can’t always be trusted in this spot. For that reason alone, this game should be a pick’em at worst.

Check out the best Bills odds and Rams odds for the 2022 season.

It’s clear that sportsbooks believe this will be a close game with a lot of scoring on both sides. The 27.25-24.75 implied score probably isn’t too far off, but don’t be surprised if each side scores a tad more. These are two of the best offenses in the league with weapons all over the field.

Bills vs Rams Pick of the Day

Read more on this Bills vs Rams bet below.

Here are the key injuries to look out for, with a few questionable designations to check on as we approach kickoff.

The home team usually has the advantage in Week 1, and that is especially true for the opening game of the season. With the Rams hanging a championship banner at SoFi Stadium, the atmosphere should be fantastic and give Los Angeles an edge.

Both of these teams are incredibly talented and are among the favorites to win the Super Bowl this year. Still, the Rams are the better bet here at home.

Expect the game to be close, but for the Rams to ultimately get the win.

Here are some recent betting trends that you may want to consider before placing your Bills vs Rams bets.

It’s hard to believe, but the Rams are +115 (even higher on some sportsbooks) to win outright here in Week 1. The home team has won seven of the last nine NFL Kickoff games and the Bills have historically been slow starters under Sean McDermott when they aren’t facing divisional opponents.

Meanwhile, Sean McVay‘s teams have always started the season off hot as they’ve covered the spread in each of their last five games in Week 1.

Taking the Rams on the moneyline at (+115) is just too good of value to pass on early in the season.

Before placing this bet, get the best Los Angeles Rams promo codes.

During the 2021 season, both the Bills and the Rams finished inside the top eight in points scored. And while the Bills also had the No. 1 scoring defense, these two teams are built around their explosive offenses.

With the point total being set at only 52.5 points, the Over seems like a good bet in this contest. Over the last two years, we’ve seen both season-opening contests soar over this total (54 in 2020 and 60 in 2021). These games are usually high-scoring, especially when both teams have superstars at quarterback.

Look for both offenses to start off hot and for the Over to hit in Los Angeles to kick off the 2022 season.

Before placing this bet, get the best Buffalo Bills promo codes.

Matthew Stafford will make sure that his new target gets comfortable quickly, so look for Robinson to see multiple red-zone looks on Thursday. He is one of the better end-zone receivers in the league with fantastic size and ball skills.

Plus, with the Bills likely giving Cooper Kupp a lot of attention, that should leave Robinson in one-on-one coverage most of the time. 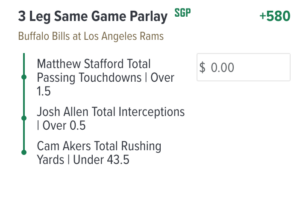 If you are going to create a same-game parlay, try to limit your selections to three or four picks. In this game, we love Matthew Stafford to throw for over 1.5 passing touchdowns as he did so in 13-of-17 games in the 2021 regular season.

Josh Allen had a career-high 15 interceptions last year and can be a little bit careless with the football. Against the great defense of Los Angeles, look for him to turn over the ball at least once.

Marcus Mosher is an NFL analyst at The Game Day, residing in Erie, PA. He covers the NFL from a betting and fantasy perspective, producing written and video content. Marcus currently hosts multiple football-related podcasts and is a managing editor at USA Today’s Sports Media Group covering the Las Vegas Raiders. He has previously worked at The Athletic and Bleacher Report.