The 2022 NFL season is just around the corner, which means it’s time to start placing NFL bets for the upcoming campaign. The San Francisco 49ers are a good team to consider for prime wagers, as they are looking to contend for the NFC Championship again.

Last year, the 49ers finished third in the NFC West at 10-7, and then upended the Cowboys and Packers in the playoffs before ultimately dropping a thriller to the Rams in the NFC title game.

With so many 49ers bets to consider at different sportsbooks, let’s go over the best San Francisco 49ers betting promo codes to take advantage of.

Sign up with the promo code and get a risk-free bonus of up to $1,500. Click “Get Bonus” below and get this excellent welcome offer from one of the best sportsbooks around.

Samuel finished fifth in the league in receiving last season with 1,405 yards, so you have to like the odds here despite the projected quarterback change. Samuel does a lot of his own work to gain big chunks of yardage. He won’t have to depend on Trey Lance to be some sort of frequent gunner to post outstanding yardage numbers again.

Over the last two seasons, Samuel has led all NFL wide receivers in average yards after the catch, and it hasn’t even been close. In 2021, he averaged 10.0, and the next closest WR averaged 8.5.

Samuel became a marvel last season because he was the best two-way wide receiver in the game. But the Niners also became thin at running back, so he was needed to carry the ball more often than expected.

San Francisco has since bolstered the backfield via the draft, meaning Samuel can be even more free to run rampant as a wideout this year.

Samuel has also been angling for a contract extension, and either the desire to land one or the aim to show he is worth it once he gets it can further motivate him to reach lofty statistical heights again.

Learn more about this betting site by reading our hands-on Caesars Sportsbook review.

Use the promo code to get a special offer of a risk-free bet of up to $1,000 when you sign up at BetMGM.

Last year, Shanahan engineered an impressive push to close the regular season before guiding his team to a pair of impressive playoff upsets. Now he is looking to make another deep playoff run while making a significant change at quarterback.

Shanahan’s staff has also undergone some notable changes as well, including losing offensive coordinator Mike McDaniel to the Dolphins. So he has some adversity to overcome, plus the perception that San Francisco is the second-best team in its own division.

If Shanahan can pilot the 49ers to an NFC West title, and a high playoff seed, then he should be in line for this honor. Lance can take the 49ers to more than 10 wins if he proves to be a quick study as a passer, and the defensive front seven remains a strength.

Shanahan can earn a top seed in the NFC if he builds on the momentum from 2021 and his young QB responds to the challenge.

Our comprehensive BetMGM review has more information about this sportsbook. 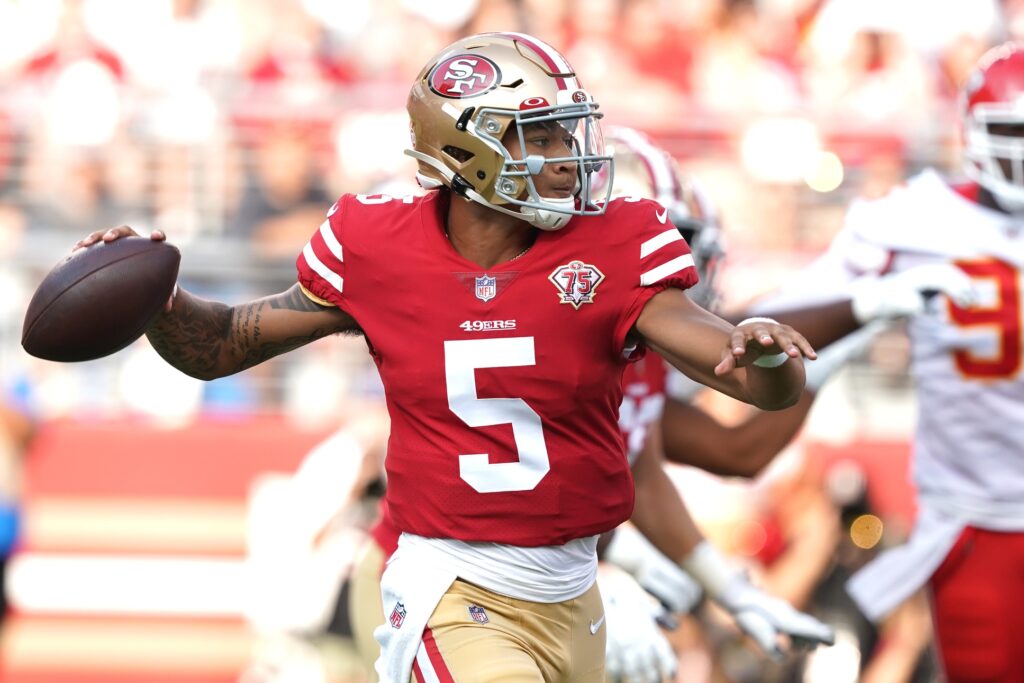 When you join BetRivers, you can get up to $250 free as a first deposit match. You can use The Game Day’s 49ers sportsbook bonus by using the code .

After pulling off two memorable wins in the playoffs and getting close to a second Super Bowl in three seasons, the Niners seem to be making a bold move by handing the reins to Lance over Jimmy Garoppolo, who is no superstar, but has also proven he can take the team far in the postseason.

But the front office and Shanahan obviously have a lot of confidence in Lance to make good on his high advance billing. So if the brain trust has faith in Lance, then he may be indeed ready to take the 49ers nearly as far as Garoppolo did in two of the past three years.

Expecting Lance to take the 49ers back to the Super Bowl in his first season as a starter is asking a lot. But he is a true dual threat who can potentially ignite the offense, and the rest of the roster around him is built to win a lot of games.

The Rams remain the favorites to win the NFC West and are looking like one of the top two teams in the conference again. But San Francisco took them to overtime in the regular season finale and lost a close one to Los Angeles in the NFC title game. Lance will have the support of a strong running game and very good playmakers to work with.

You can take advantage of Betway’s welcome offer after completing the sign-up process. No promo code is needed, just to receive a risk-free bet.

Further illustrating that Warner is truly one of the best linebackers in the game, there was a perception that his play slipped during the first half of the 2021 season. Yet he still finished with a career-high 137 tackles and tied a personal record with seven tackles for a loss.

The 49ers linebacking corps is rated No. 1 in the league by Pro Football Focus heading into the 2022 season, and Warner is a primary reason for such high respect. He is arguably the best all-around linebacker in the game and one of the premier run-stoppers as well.

Warner makes significant plays in all situations, all over the field. His performances in the postseason were instrumental in San Francisco’s run to the NFC title game. He was an All-Pro selection in 2020 and may have an even better overall campaign this year.

Warner should perform at a superstar level from wire to wire this season, and that means he has a good chance of bettering his tackle totals from 2021. He reportedly felt the pressure of signing a big contract last season early on, but that mindset is well behind him by now.

Find out more about this betting site in our detailed Betway Sportsbook review.