We are getting close to the NFL season, so it is a great time to look at some of the best values in futures bets. Sportsbooks offer lucrative welcome bonuses which allow you to take a shot on a pick at long odds to get the most out of the promo.

This article will focus on the Green Bay Packers, a perennial Super Bowl contender. We will be examining some of the best promos from top sportsbooks here. Additionally, you will find some potential Packers futures that can land you a nice payout.

Sign up with the promo code to get your first bet on Caesars, up to $1,250, plus 1,000 Tier and Reward Credits. Click the link below today to get this exciting welcome offer.

While the -110 odds may not scream value, the Packers are a near-lock to eclipse 11 wins in the NFC. Of course, this has more to do with the NFC’s state than Green Bay’s, but the environment makes for an easy cash-in.

Green Bay retained their diamond in the rough cornerback Rasul Douglas this offseason, in addition to linebacker De’Vondre Campbell. The Packers also doubled down on defense in the first round of the NFL Draft by selecting two Georgia Bulldogs, Quay Walker and run-stuffer Devonte Wyatt.

All the puzzle pieces above will surround all-world talents such as Jaire Alexander and Kenny Clark and make Green Bay a top-five defense in the NFL in 2022. This roster should have no issues given their schedule with quarterbacks such as Daniel Jones, Zach Wilson, Mac Jones, Carson Wentz, Jalen Hurts, and Jared Goff (twice) on the opposing side.

Some may point to the loss of Pro Bowl wide receiver Davante Adams as a reason to fade the Cheeseheads, but the Green Bay offense begins and ends with Aaron Rodgers. As a result, rookie Christian Watson will be immediately thrust into a significant role and should be a strong contender for Offensive Rookie Of The Year. At the same time, Allen Lazard will need to step up and perform as a WR1.

Undoubtedly, the Packers’ offense will need to find a groove, which may take some time. However, Green Bay plays in one of the weakest divisions in football and has a relatively non-threatening out-of-division schedule.

Matt LaFleur led Green Bay to 13 wins in his first three seasons as head coach, and even with their issues, they are a great bet to hit the Over on 11 wins.

Register at BetMGM and get up to $1,000 risk-free as your welcome bonus. Use promo code to get this special offer.

As mentioned above, it may take the Packers offense some time to settle in, but they should be able to build some rapport come playoff time. In fact, due to their schedule, Green Bay stands a great chance to compete for a first-round BYE in the playoffs.

The Tampa Bay Buccaneers (+325) and Los Angeles Rams (+500) are the Packers’ primary competition for the NFC crown, which may seem like a steep mountain to climb given the question marks surrounding the Packers’ passing attack. However, the rest of the conference does not pose much of an immediate threat outside of those three teams.

There are many talented rosters in the NFC, such as the San Francisco 49ers, Dallas Cowboys, Arizona Cardinals, and Philadelphia Eagles, but even those teams have severe question marks. Overall, the conference lacks parity, making a wager on the top teams more palatable.

Green Bay has the back-to-back MVP searching for a second championship to cement his legacy with the help of a young coach who has done nothing but win. The Packers are not perfect, but they still stand a strong chance of representing the NFC in Super Bowl LVII. 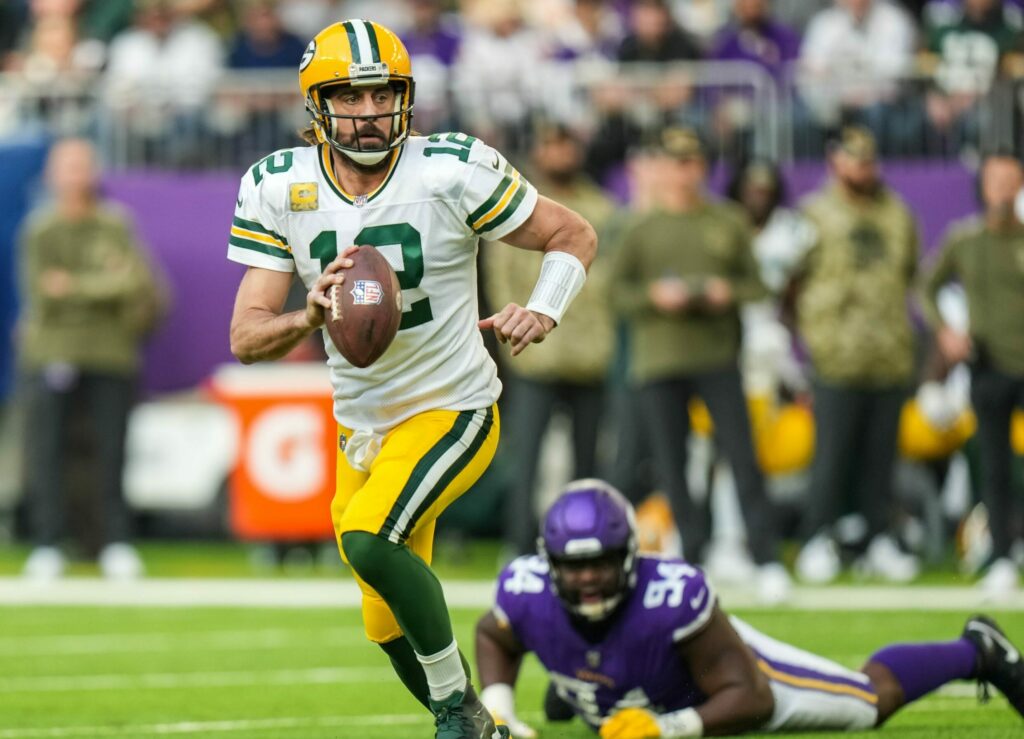 When you sign up and bet at BetRivers, you’ll get a first deposit match of up to $250. Use The Game Day’s Packers sportsbook code to receive this now.

Aaron Rodgers has four MVP awards, including the last two, and was the MVP of Super Bowl 45. The only weak point in his resume is that the 38-year-old would like to win a second championship to cement his legacy as one of the greatest quarterbacks of all time.

That is easier said than done, especially since football is a team sport. That said, Rodgers has the ability, maybe more than anyone in the NFL, to carry his team to victory by himself.

Earlier in the article, a strong case was made for the Packers to eclipse their win total and win the NFC North due to their favorable schedule. These variables should give Rodgers a leg up in the MVP race.

The future Hall of Famer has thrived in Matt LeFleur’s system, with opposing defenses needing to respect the run and allow for a balanced passing attack. In addition, the play calling allows Rodgers to take advantage of holes in the defense and take large chunks of yardage where he can.

Winning three MVP awards in a row is incredibly difficult, and the only player in NFL history to achieve this feat was Packers legend, Brett Farve. That said, Rodgers is motivated to pad his legacy by any means necessary.

Look for a motivated Aaron Rodgers to spread the ball around against a weak schedule and make a run at a third consecutive Most Valuable Player award.

Want to learn more? Read our BetRivers review to find out everything you need to know.

New signups at DraftKings can get $200 FREE when they , create an account using promo code GAMEDAY200, deposit at least $5, and place a $5+ wager on a pregame moneyline in any sport as their first bet. Whether that bet wins or loses, receive eight (8) $25 free bets, totaling $200.

This wager is a narrative selection if there ever was one. The Packers enter the season without superstar receiver Davante Adams and did not sign a major free agent or make a trade to place him. What they did do was draft North Dakota State wideout Christian Watson.

Green Bay traded two second-round picks to move up and select Watson in the 2022 NFL Draft, which should tell you how much they wanted the 23-year-old. The Packers have a long track record of not pursuing offensive weapons early in the draft, so this was a nice change of pace that was sorely needed.

Believe it or not, Allen Lazard is the Packers’ returning leader in receiving yards from 2021. This should tell you all you need to know about the opportunity that may await Watson in his rookie season.

There are other terrific options for the award, such as Drake London, Breece Hall, Treylon Burks, and Kenny Pickett, but at (+800), there is great value in taking a flier on Watson with Aaron Rodgers throwing him the ball.

Learn more about this sportsbook with our hands-on DraftKings review.