We’re now on to Week 7 of the NFL season, so it’s time to build some parlays. We’ve now gone through one-third of the year, giving us a sense of the hierarchy of contenders and pretenders.

We can take a look at a team’s recent performances and target any mismatches in head-to-head matchups to help us in creating these parlays.

In this article, we’ll provide a best bet along with a longshot and Same Game Parlay for Week 7.

We’ll look to keep it rolling after a strong showing with our Week 7 NFL parlays.

NFL Week 7 odds used in these parlays are current as of Thursday, Oct. 20, at FanDuel Sportsbook.

The Bengals (3-3) looked to have turned the corner offensively in their comeback victory against the Saints last week. Quarterback Joe Burrow completed 28 of 37 passes for 300 yards and three touchdowns as the team utilized a more pass-heavy approach.

Cincinnati will play host to the overachieving Falcons (3-3), who surprisingly knocked off the 49ers last week. Atlanta has been the most run-heavy offense in the NFL, which could make things difficult if they fall behind against this dynamic Bengals’ passing game.

The Falcons have been a nice surprise this season, but it’s hard to see them pulling off the upset on the road against the Bengals. I’m not comfortable taking Cincinnati against the spread because Atlanta has played teams close, but I don’t see the Bengals losing here.

The Chargers (4-2) have now won three in a row, putting them back into a good position to contend for the AFC West division lead. This is a get-right spot for the offense in facing a Seahawks defense that ranks 26th in Pass DVOA and 21st in Rush DVOA, per Football Outsiders.

Seattle (3-3) has been one of the biggest surprises in the NFL, particularly on offense, where Geno Smith has exceeded expectations at quarterback. The question is, how long will this last? It’s hard to see them knocking off one of the best teams in the AFC in the Chargers.

There’s a good chance that Justin Herbert will get back on track in an exploitable matchup here, especially if wideout Keenan Allen is ready to return. Los Angeles has advantages in home field and in overall talent, so ride with the Chargers in this best NFL betting pick. 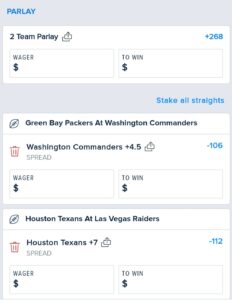 The Commanders (2-4) are being a bit undervalued as home underdogs here. Quarterback Carson Wentz is out for this game, but backup Taylor Heinicke isn’t much of a downgrade with the way Wentz had been playing.  Washington’s defense is starting to improve, allowing only 28 points in their last two games.

The pass rush is starting to roll, as the Commanders have racked up 10 sacks in their last two games. That could be bad news for a Packers’ offense that has really struggled without Davante Adams. While Allen Lazard has played well, the team is missing a big-play element that they had in previous seasons.

The Packers are simply not playing well right now, coming off consecutive losses to the Giants and Jets. Prior to that, they needed overtime to knock off Bailey Zappe and the Patriots. Simply put, this team cannot be trusted laying 4.5 points on the road, even against the Commanders.

The Texans have been a scrappy team this season, losing by no more than 10 points. They also have a three-point and seven-point loss on the year. Despite playing the Raiders (1-4), Houston finds themselves as seven-point underdogs here. While I think Las Vegas will win, I believe Houston can keep this one close.

Rookie running back Dameon Pierce continues to exceed expectations, while this could be a breakout game through the air for Davis Mills and the Texans. That’s because Vegas has allowed 7.58 yards per attempt to opposing quarterbacks, which ranks 26th in the NFL.

The Raiders have been one of the most disappointing teams in the NFL this season, so it’s tough to trust them laying seven points, even at home against the Texans. Houston is 3-1-1 against the spread this year, and I think they’ll be able to keep it close in this game. 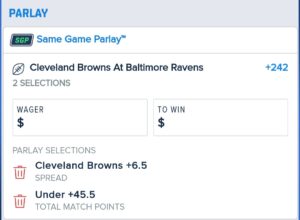 The Ravens are another team that cannot be trusted with larger point spreads. We’ve seen Baltimore blow fourth-quarter leads against underdogs like the Giants and Dolphins this year. They also should have upset the Bills, but they were not able to hang on to their lead in that one, either.

The Browns are exactly the type of team you want to target as larger underdogs. That’s because they have an elite offensive line that allows for a highly efficient running game. Nick Chubb is the best pure runner in football, which could lead to longer drives, keeping the ball away from Lamar Jackson and company.

We’ll ride with the Under because it has a stronger correlation with this game script. We want Cleveland to control time of possession with the running game, which would mean fewer points. Ride with the Browns and the Under in this pivotal AFC North showdown.