We’re now onto Week 6 of the NFL season, with several intriguing developments that have helped shape the hierarchy of contenders and rebuilding teams this season.

Exploring recent performances along with mismatches in head-to-head matchups can help guide us toward winning football parlays.

In this article, we’ll provide a best bet along with a longshot and Same Game Parlay for Week 6.

We’ll look to rebound from a poor performance with our Week 6 NFL parlays.

NFL Week 6 odds used in these parlays are current as of Wednesday, Oct. 12. 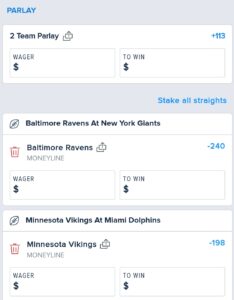 The Ravens (3-2) are on the road to take on the surprising Giants (4-1). Baltimore has shored up their pass defense, limiting Josh Allen (5.9 Y/A) and Joe Burrow (6.2 Y/A) in their last two games. More help is on the way for this defense, which should continue to improve as a unit.

Baltimore will likely get back linebackers Tyus Bowser (seven sacks last year) and David Ojabo (second-round rookie) this week. This can help their pass rush against a limited Giants passing game that continues to play without wideout Kadarius Toney.

While it’s hard to trust the Ravens to cover the 5.5-point spread on the road against a well-coached Giants team, I’m comfortable parlaying them with the moneyline because of their improving defense. It’s going to be difficult for New York to move the ball through the air.

The Vikings (4-1) have now won three in a row following their ugly loss on Monday Night Football against the Eagles. Kirk Cousins is starting to get in a groove, completing a combined 57-of-79 passes (72.1%) for 569 yards in his last two games.

Minnesota’s passing game should continue to have success against a Dolphins defense that ranks dead-last in Pass DVOA, per Football Outsiders. While Miami should get top cornerback Xavien Howard back for this game, they’ll have their hands full with Justin Jefferson and company.

To make matters worse, it looks like third-string quarterback Skylar Thompson is in line to start this game. The seventh-round rookie completed 57.6% of his passes at 5.0 yards per attempt against the Jets last week. Ride with Minnesota in this best NFL betting pick. 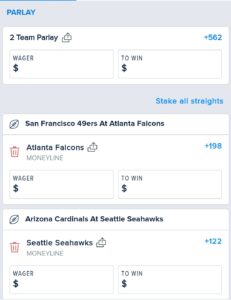 The Falcons (2-3) have been a scrappy team this season, covering the spread in each of their five games. Atlanta is coming off a six-point road loss against the Bucs in Tampa Bay. Each of their three losses have been by six or fewer, including a one-point loss at home to the Saints.

While head coach Arthur Smith has done a poor job getting Kyle Pitts more involved in the offense, he’s had his team playing hard on a weekly basis. Pitts looks ready to return to the lineup, which gives Marcus Mariota another weapon in the passing game.

On the other side, the 49ers (3-2) have shown that they sometimes play down to their competition. We’ve seen San Francisco drop road games to the Bears and Broncos this year, two of which should have been victories. We’ll back the home underdogs in this spot.

The Seahawks (2-3) continue to shock the league with how impressive their offense has been, especially Geno Smith. The veteran signal-caller has Seattle ranked first in Pass DVOA, which is incredible when you consider his track record. What a breakout year it’s been.

They’re home underdogs to their division rival Cardinals (2-3) here, a team that has been a bit out of sync on offense all year long. Arizona ranks 23rd in Pass DVOA, while Kyler Murray is only averaging 5.8 yards per attempt. They badly need DeAndre Hopkins back in the lineup.

As crazy as it sounds, the Seahawks have the edge on offense along with home-field advantage here. That makes them a great value pick at (+122) odds. While the team lost Rashaad Penny for the season, rookie Ken Walker III is a highly talented back in his own right. Look out for this offense. 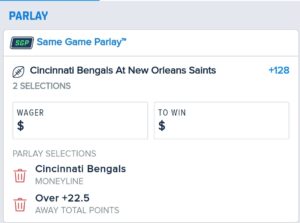 The Bengals (2-3) will look to bounce back from a tough road loss against the Ravens. This team continues to play well on defense, ranking seventh in Pass DVOA and 11th in Rush DVOA. In fact, Cincinnati has held each of its five opponents to 23 points or fewer.

The Saints offense has been pretty mediocre so far this year, ranking 24th in EPA per play, per RBSDM.com. It’s going to be difficult for them to get back on track against this Bengals defense. New Orleans will need to continue getting Alvin Kamara more involved in the offense.

While the Saints defense is the strong part of their team, ranking 13th in Pass DVOA and 10th in Rush DVOA, 23 points is a low bar to clear for a Bengals offense that includes talents like Joe Burrow, Ja’Marr Chase, Tee Higgins, and Joe Mixon.