We are now at the quarter-point of the NFL season, and we have a better sense of the strengths and weaknesses of each team, helping us stay ahead of the market.

In this article, we’ll take a look at our best bet along with a longshot and Same Game Parlay for Week 4.

I’ve gotten off to a strong start so far, so let’s keep it rolling for our Week 4 NFL parlays.

Note: NFL Week 4 odds used in these parlays are current as of Friday, Sept. 30.

The Vikings take on the Saints on a neutral field in London. New Orleans is dealing with a myriad of injuries, with Jameis Winston, Michael Thomas, and Jarvis Landry all banged up. Minnesota is the better team here, even if each of these players can suit up.

The Saints were only able to narrowly defeat the Falcons in a comeback win, while already losing to the Bucs and Panthers. This offense has looked out of sync so far, and they desperately need Winston, Thomas, and Landry to play here.

It’s tough to see how they can keep up with Kirk Cousins, Justin Jefferson, and Adam Thielen here. While Dalvin Cook is injured, Alexander Mattison is one of the best backup running backs in football. Minnesota should be able to get it done.

The Packers are home to the Patriots, who will be starting Brian Hoyer at quarterback due to Mac Jones‘ injury. Green Bay’s defense has played well this year, coming off a win where they held Tom Brady and the Bucs to only 12 points.

Rookie Romeo Doubs is starting to emerge as the top target in this passing game, coming off a breakout performance where he caught all eight of his targets for 73 yards and a touchdown. If Doubs can keep it rolling, it would add much-needed balance to this Green Bay team.

With the improvements on defense, it’s bad news for the NFL if the offense can get going. Look for the Packers to win handily in this inter-conference matchup, making it an easy decision for NFL betting.

The Jaguars are a problem this season. Not only is Trevor Lawrence taking a Year 2 leap, but the defense has shown significant improvements, allowing a combined 10 points in their last two games. Rookies Travon Walker and Devin Lloyd are making a major impact.

It’s the Doug Pederson revenge game here, as he makes his return to Philadelphia. While the Eagles look like an elite team this year, the Jags are being underrated in this spot. Look for a close game with Jacksonville having every opportunity to pull off the upset on the road.

The Texans are 0-2-1, but they have played the Colts and Broncos tough so far. They had a 23-20 loss to the Bears last week, but they got Dameon Pierce and the running game going. Last year, Houston upset the Chargers, led by 149 rushing yards from Rex Burkhead.

Los Angeles is dealing with a lot of injuries right now. They lost stud left tackle Rashawn Slater for the season and elite pass-rusher Joey Bosa for a few weeks. Add in the fact that Justin Herbert is clearly not 100 percent and you have a team ripe for an upset. 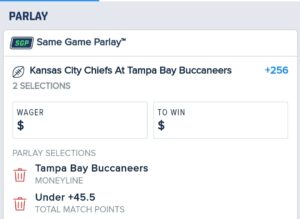 The Buccaneers defense has been legit so far, giving up a combined 27 points in three games, including 14 to Aaron Rodgers and the Packers last week. Meanwhile, the Chiefs have combined for 37 points in their last two games, showing that they miss Tyreek Hill.

Tampa Bay will get Mike Evans back from suspension for this game, and we also saw Russell Gage break out against Green Bay, hauling in 12 receptions for 87 yards and a touchdown. It’s only a matter of time before the Bucs’ offense starts showing some improvement.

I’ll take the Bucs at plus-money and pair it with the Under. Tampa Bay games have combined for 22, 30, and 26 points so far this season. It’s hard to see them getting into a shootout with Kansas City’s recent struggles on offense. Look for a low-scoring Bucs win here.