We’re now almost one quarter through the season, so it’s time to look at the top Week 3 NFL parlays. Our goal is to stay ahead of the market and target mispriced lines.

In this article, we’ll look at the best football parlay bet along with a longshot and same game parlay for Week 3.

Let’s get right into it and dive into the best bets. 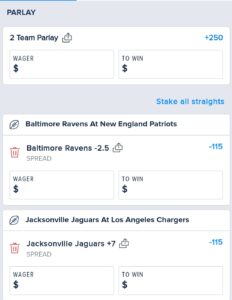 The Baltimore Ravens are coming off a fourth-quarter collapse, where they blew a 35-14 lead against the Miami Dolphins. They should get back on track against the New England Patriots and their struggling offense.

It’s tough to see the Pats keeping pace with Baltimore here, especially with how terrific Lamar Jackson has looked so far. The star quarterback threw for 318 yards and three touchdowns, adding 119 yards on the ground.

New sign-ups at FanDuel Sportsbook can capitalize on the fantastic No Sweat First Bet up to $3,000.

To activate the offer just , create a FanDuel account, make your first deposit of $10+, and place your first real money bet on any market in the FanDuel Sportsbook.

The Jacksonville Jaguars looked great in their 24-0 statement win over their division rival Indianapolis Colts. Trevor Lawrence looks like he is taking a big leap in Year 2, completing 25-of-30 passes for 235 yards and two touchdowns in the victory.

While this is a tough matchup against the Los Angeles Chargers, this is a team with a banged-up Justin Herbert and Keenan Allen. We’re getting seven points with the Jags here, so we’ll take that value. 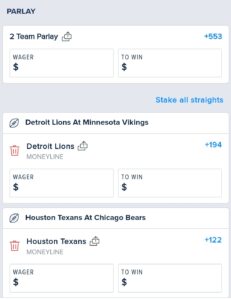 The Detroit Lions are legit, folks. After a close home loss against a tough Philadelphia Eagles team, the Lions held on to beat the Washington Commanders 36-27 after building a 22-0 first-half. Detroit is dominant in the trenches.

While the Vikings are coming off an ugly loss on Monday Night Football, they should not be favored by 5.5 points here. That’s a high number, especially when you consider that Detroit can win this outright. Look out for Lions’ rookie edge rusher Aidan Hutchinson, who has been highly impressive so far, to be a difference maker.

The Houston Texans have a tie against the Indianapolis Colts and a seven-point loss to the Denver Broncos so far. They’ve been pretty tough against the pass, limiting Russell Wilson to only 219 yards through the air. Chicago has struggled on offense, and they got a lucky win against San Francisco due to the weather conditions. 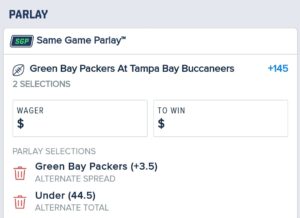 I’ll go with the alternate spread and total here. We get past that key number of three points by going with the Packers +3.5. The Bucs are shorthanded on offense with Mike Evans serving his one-game suspension.

Both teams have struggled on offense, and Green Bay continues to rely on its running game with Aaron Jones and A.J. Dillon, especially with Davante Adams now in Las Vegas. We can expect a close game that ends in a field goal. Adding three points to the total gives us a chance to still hit with a 23-20 type of result.