We’ve got two weeks left in the NFL season. It’s time for Week 17, so we’re going to continue our strategy of prioritizing teams that are contending for the playoffs.

NFL Week 17 odds used in these parlays are current as of Friday, Dec. 30, at Caesars Sportsbook. 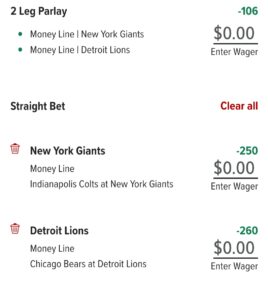 The New York Giants can clinch a playoff spot with a win over the Indianapolis Colts this week.

The Colts are a tanking team that is trotting out Nick Foles at quarterback. The veteran was sacked seven times, forcing him into three interceptions in a 20-3 loss to the Los Angeles Chargers.

Meanwhile, the Giants are getting strong production from their most important player on offense in Saquon Barkley. The star running back has combined for 253 total yards during their last two games.

While the Colts’ defense has shown flashes of brilliance, their offense has been so putrid that it doesn’t matter much.

Look for the Giants to win at home as they punch their ticket to the postseason.

The Detroit Lions are coming off a disappointing road effort in a 37-23 loss to the Carolina Panthers. Detroit was gashed for a combined 290 rushing yards from D’Onta Foreman and Chuba Hubbard.

However, this is a team that is still in the thick of the playoff race. They’re back at home, where quarterback Jared Goff is much more effective, putting up a 106.9 QB rating, compared to 87.6 on the road.

They’ll look to knock off the division rival Chicago Bears, a team that they beat 31-30 earlier in the season.

While it’ll be tough for Detroit to slow down Justin Fields, they have enough pieces on offense to win this shootout.

Ride with the Lions in this parlay to finish off our NFL betting pick. 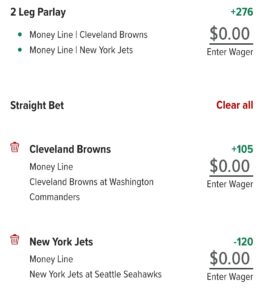 The Cleveland Browns have struggled on offense since Deshaun Watson returned, scoring a combined 39 points in four games. However, two of those games were in windy weather, which impacts the passing game.

We also have to acknowledge that it will take Watson time to get back on track, as missing such a lengthy time period has likely caused some rust in his game.

The Washington Commanders are going back to Carson Wentz at quarterback, so it’s unclear how well the offense will play in this one.

Washington is only favored by two points at home for a reason — these are comparable teams right now. I’ll roll with the underdog Browns in this spot.

The New York Jets are happy to have Mike White back from injury, just in time for a must-win road game against the reeling Seattle Seahawks.

Seattle has now lost four of their last five, with their one win against the Los Angeles Rams, who started John Wolford at quarterback in that game.

The offense has combined for only 23 points in their last two games. Quarterback Geno Smith has averaged only 5.39 yards per attempt during that span.

That’s bad news against a Jets defense that ranks sixth in Pass DVOA, per Football Outsiders.

The Jets are road favorites here because they’re the better team right now. 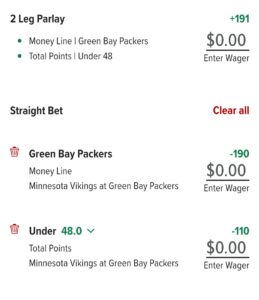 The Green Bay Packers have now won four of their last six games, putting themselves back into playoff contention.

During their current three-game winning streak, they’ve held their opponents to a combined 51 points.

The Packers do a good job of sustaining longer drives to slow down the game and keep the opposing offense off the field.

Look for them to lean on their running game as they go up against the likes of Justin Jefferson and Dalvin Cook. They don’t want this one to turn into a track meet.

That’s why we’ll ride with Green Bay and the Under here. I prefer taking the Packers on the moneyline because I want to avoid a potential push if they win by three.

This game can easily end in a last-minute field goal, so we’ll ride with the Packers to win outright.