We’re down to the stretch run of the NFL season. It’s time for Week 16, so we need to continue to target teams that are contending for a playoff spot.

Let’s keep it rolling in our Week 16 NFL parlays.

NFL Week 16 odds used in these parlays are current as of Wednesday, Dec. 21, at Caesars Sportsbook. 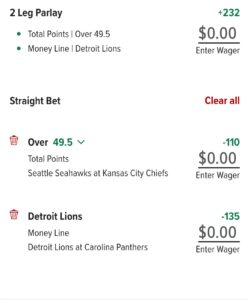 It’s hard to see how the Seattle Seahawks will slow down the high-octane Kansas City Chiefs offense this week.

Seattle ranks 19th in Pass DVOA and 28th in Rush DVOA, per Football Outsiders. They’ll have to air it out to keep pace with the Chiefs.

The good news is that Kansas City has struggled defending the pass, ranking 25th in Pass DVOA.

We’ve got the perfect recipe for a shootout in this matchup.

Three of Seattle’s last four games have combined for 50 or more points. Look for that to continue in this matchup.

The Detroit Lions are the hottest team in football right now, winners of six of their last seven games. Their one loss came against the Buffalo Bills, who are currently the number one seed in the AFC.

The Lions have turned it up a notch on defense during this stretch, particularly against the run, where they are allowing only 3.2 yards per carry.

They’ve got a winnable matchup on the road against the Carolina Panthers, who have been plagued by erratic quarterback play.

We’ll roll with the red-hot Lions in this parlay to finish off our best NFL betting pick. 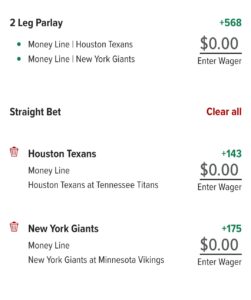 The Houston Texans have come alive in the last two weeks, with close losses to the Dallas Cowboys (27-23) and the Kansas City Chiefs (30-24). These are two Super Bowl contenders, so it’s an impressive stretch.

The Tennessee Titans will have to turn to rookie Malik Willis at quarterback, as Ryan Tannehill is currently nursing an ankle injury. There’s too much value on the Texans here when you consider their recent play coupled with the Titans’ quarterback concerns.

The New York Giants are fighting for their playoff lives as they travel to Minnesota to take on the Vikings, who are trying to secure the No. 2 seed in the NFC.

The Vikings are an interesting team, as they’re currently 25th in overall DVOA, which is a staggering difference from their 11-3 record. We saw Minnesota erase a 33-0 deficit against the Indianapolis Colts, but the fact that they got into that position against a mediocre team is troubling.

The Giants are a well-coached team that should be able to keep this one close. We’ll roll with the value here as we complete our underdog parlay. 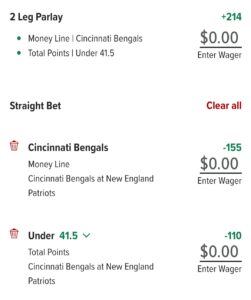 The Cincinnati Bengals are another team that’s rolling right now, currently on a six-game winning streak. They’ll be looking to put an end to the New England Patriots’ playoff hopes here.

New England has lost three of its last five games. The Patriots have been held back by poor play-calling and quarterback play.

Sometimes, it’s best to keep it simple. We’ll take one of the hottest teams in the NFL and ride their significant quarterback advantage with Joe Burrow at the helm.

The Under looks like the safer play when you consider New England’s offensive struggles, particularly at quarterback.