It’s the final stretch run of the NFL season. We’re onto Week 15, so we need to continue to prioritize teams who are still in the thick of the playoff race.

We cooled off in Week 14, failing to hit any of our parlays. However, we’ve still been profitable for the year.

Let’s bounce back in our Week 15 NFL parlays.

NFL Week 15 odds used in these parlays are current as of Wednesday, Dec. 14, at Caesars Sportsbook. 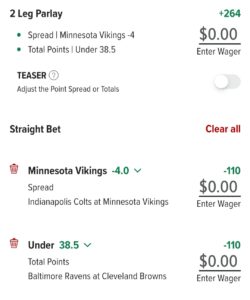 The Minnesota Vikings (10-3) are only four-point home favorites against the Indianapolis Colts (4-8-1). While the Vikings have overachieved, they’re still a much better team than the Colts.

Indianapolis is simply playing out the season, currently on a three-game losing streak that includes a 54-19 blowout to the Dallas Cowboys.

Minnesota is coming off a tough loss against one of the hottest teams in football in the Detroit Lions. I understand that they’ve been fortunate to win several close games, but I can’t pass up on such a low number here.

We’ll head to the AFC North to complete our top parlay, targeting a divisional game between the Baltimore Ravens and Cleveland Browns.

There’s a chance that both Lamar Jackson and Tyler Huntley miss this game, which would thrust undrafted rookie Anthony Brown into a starting role.

Even if Lamar or Huntley play, this is still a struggling offense, failing to eclipse 20 points in three of their last four games. On the other side, the Browns have been a mess in two games with Deshaun Watson, scoring only 37 points in those two contests, 14 of which came from the defense.

We’ll roll with the Under in this parlay to finish off our best NFL betting pick. 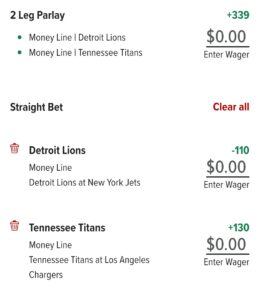 This team is now 11th in overall DVOA, which is highly impressive when you consider that they started off the year with a 1-6 record.

While the New York Jets have been much better on offense with Mike White at quarterback, he’s currently at less than 100 percent, as he’s dealing with a ribs injury.

The Tennessee Titans are coming off their two worst losses of the season, allowing a combined 71 points in this stretch. However, we’re banking on the coaching advantage with Mike Vrabel over Brandon Staley of the Los Angeles Chargers here.

Vrabel has consistently gotten Tennessee to exceed expectations throughout his tenure with the team. Meanwhile, the opposite has been true for the Chargers.

While Los Angeles is finally healthy on offense, I expect a much better effort from the Titans here.

Look for Tennessee to lean on Derrick Henry in an exploitable matchup against a Chargers’ defense allowing 5.52 yards per carry, the worst mark in the NFL. 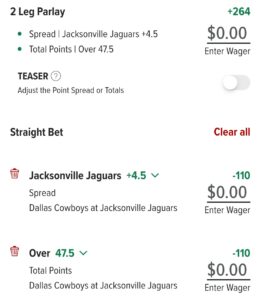 The Jacksonville Jaguars (5-8) have gone 3-2 in their last five. This is a dangerous team with the way Trevor Lawrence is playing right now. The second-year quarterback has 10 touchdowns and zero interceptions in his last five games.

While the Dallas Cowboys (10-3) are one of the best teams in the NFL, this is a tough spot for them on the road. They showed some cracks in their armor last week against the lowly Houston Texans (1-11-1), trailing 23-17 heading into the fourth quarter.

I’m willing to take the Jaguars plus the points because Lawrence is scorching hot right now. We’ll roll with the Under as well, as the Cowboys have scored at least 27 points in six straight games.