We’re in the thick of the playoff race, so it’s an interesting time in the NFL season. It’s Week 14, so we need to mostly focus on teams in contention and avoid those simply playing out the year.

Week 13 was another profitable week, putting us at +21.33 Units for the season. It’s a crazy turnaround when you consider that we were in the red as recent as Week 11.

Let’s continue this hot streak with another strong showing in our Week 14 NFL parlays below.

NFL Week 14 odds used in these parlays are current as of Wednesday, Dec. 7, at Caesars Sportsbook. 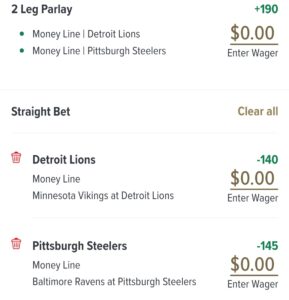 Here we have two divisional games, each with a favored home team with an inferior record. The question we need to ask is, why are these teams laying points?

Let’s start with the Detroit Lions (5-7), who are hosting the Minnesota Vikings (10-2). The Lions are coming in hot, having won four of their last five games.

During this stretch, Detroit is ranked sixth in overall DVOA, per Football Outsiders, while the Vikings come in at 23rd. Add in the fact that Jared Goff has a 104.8 quarterback rating at home, and you can see why the Lions are favorites here.

Then you have the Pittsburgh Steelers (5-7) in a similar situation against the Baltimore Ravens (8-4). Pittsburgh is playing their best football of the year, going 3-1 in their last four games.

Lamar Jackson is going to miss this game, forcing Tyler Huntley into the lineup. While Huntley has played like a competent backup, he’s obviously a clear downgrade from Lamar.

The Ravens have struggled in their last three games, barely beating the Denver Broncos (3-9) and Carolina Panthers (4-8), while losing to the Jacksonville Jaguars (4-8).

The Steelers are favored for good reason here, so we’ll add them in this parlay to finish off our best NFL betting pick. 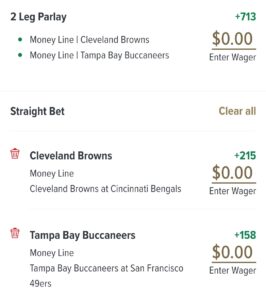 The Cleveland Browns (5-7) are live dogs in this divisional matchup against the Cincinnati Bengals (8-4). While Deshaun Watson struggled in his first game back last week, we can chalk that one up to rust.

Cleveland seems to have Cincinnati’s number, having won five consecutive matchups. Bengals’ quarterback Joe Burrow has averaged 6.8 yards per attempt against the Browns in his career.

The Tampa Bay Buccaneers (6-6) got a much-needed comeback win against the New Orleans Saints. They’ll look to build on that victory on the road against the San Francisco 49ers (8-4).

The value is too good to pass up on the Bucs here, especially when you consider their quarterback advantage. We’ll roll with Tom Brady over Brock Purdy in this spot. 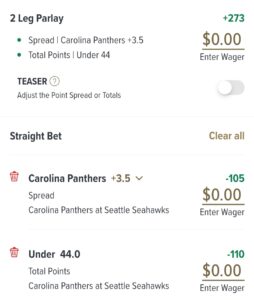 I like the Panthers (4-8) to put a scare in the Seahawks (7-5). Carolina has won two of their last three games, which includes a close loss to the Ravens on the road.

Sam Darnold looked competent in his first start of the year, averaging 8.6 yards per attempt in a 23-10 victory over the Denver Broncos.

The Seahawks have struggled a bit on defense lately, allowing 8.03 yards per attempt in their last three games, which ranks 27th in the NFL.

We could see Carolina do enough on offense to keep this game within a field goal, perhaps even winning outright.

I think it will stay Under the number as well, since the Panthers’ pass defense has been stout lately. They’ve allowed only 5.48 yards per attempt in their last four games.