We’re now in the final stretch of the NFL season. It’s Week 13, so we have a good sense of the hierarchy of teams in the league. We know who’s trending up and who’s just playing out the year.

We had a massive week in both the Thanksgiving and Sunday slates, winning four of six parlays to turn this from a losing season to a profitable one. That’s how quickly things can change in the world of parlays.

Let’s keep it rolling with another strong showing in our Week 13 NFL parlays below.

NFL Week 13 odds used in these parlays are current as of Wednesday, Nov. 30, at Caesars Sportsbook. 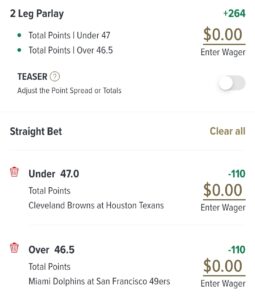 Deshaun Watson makes his return for the Browns this week, ready to take on his former team. Houston is a run-funnel defense, where they struggle to slow down opposing ground games, causing teams to pass at a lower rate against them.

The Browns have one of the most efficient running games in the NFL, led by Nick Chubb. This is a major mismatch here, which could slow down the game and limit scoring.

Add in the fact that the Texans offense has failed to score 20 points in six of their last seven games and you have the perfect recipe for an Under.

The Dolphins take on the 49ers, as head coach Mike McDaniel returns to San Francisco to take on his former boss, Kyle Shanahan. Both teams have terrific offensive schemes, loaded with playmakers.

We could see a shootout in this one, even with the 49ers’ defense rounding into form, coming off a shutout win over the New Orleans Saints.

San Francisco completely shuts down opposing running games, ranking No. 2 in Rush DVOA, per Football Outsiders. This will force the Dolphins to the air, where they rank No. 1 in Pass DVOA.

This number is too low considering the talent of each of these offenses, so we’ll ride with the Over in our best NFL betting pick. 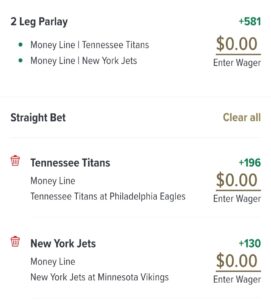 We have a major mismatch in this Titans vs Eagles game. Tennessee has one of the best running games in the NFL, led by Derrick Henry, while Philadelphia ranks No. 24 in Rush DVOA.

The Titans can force the Eagles to the air, as they’ve defended the run at a high level, ranking No. 1 in Rush DVOA. This could put Jalen Hurts into unfavorable passing situations, resulting in potential turnovers.

The Jets (7-4) looked much better on offense with Mike White at the helm. They now take on a Vikings defense that just got shredded for 382 yards and two touchdowns by Mac Jones.

Despite their 9-2 record, Minnesota only ranks No. 22 in total DVOA, while the Jets come in at No. 9. I’ll roll with the Jets in this upset due to their improvements on offense. 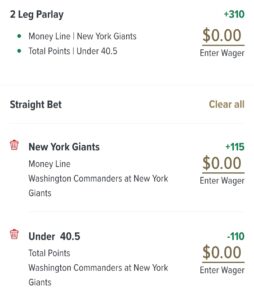 The Commanders are one of the hottest teams in the NFL, winning six of their last seven games. However, I love the value on the Giants as home underdogs.

Both of these teams are similar in DVOA, with Washington at 17th and the Giants at 21st. New York is on a two-game losing streak, but that was against an elite Dallas Cowboys team along with the improving Detroit Lions.

This should be a close divisional game that ends up low-scoring. Commanders’ games have failed to eclipse 40 points in five of seven games during this stretch.

I’m backing the Giants at home here, as there’s simply too much value.