It’s time for Week 11 of the NFL season. It’s been an interesting year filled with surprises (Seahawks) and disappointments (Rams).

We’ve been ice cold lately, losing a few parlays due to narrow misses, such as the Bears blowing the lead to the Lions in Week 10. It’s about that time for a bounce back, so we’ll take a look at recent performances along with pertinent data to guide us in our selections.

Let’s have a strong showing with our Week 11 NFL parlays below.

NFL Week 11 odds used in these parlays are current as of Wednesday, Nov. 16, at FanDuel Sportsbook. 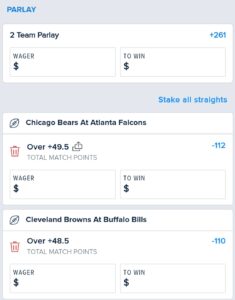 The Chicago Bears have been Over machines lately. Their last four games have combined for 47, 78, 67, and 61 points, respectively. Justin Fields has been an absolute monster during this stretch, rushing for 467 yards and five touchdowns.

It’s a good matchup indoors at the Mercedes Benz Stadium in Atlanta. The one concern here is that these are two run-heavy teams, but that’s mitigated by the fact that the Bears have been so poor on defense lately.

Originally, I was rolling with the Under in the Cleveland Browns and Buffalo Bills game because of the snowy weather. As crazy as it sounds, I’m not on the Over with the game being moved to Detroit.

What was once a run-heavy game script in treacherous conditions now turns into a pass-heavy game in an indoor stadium. Josh Allen should have his way against this Browns’ vulnerable defense, so I’m completely comfortable with taking the Over to finish off this best NFL betting pick. 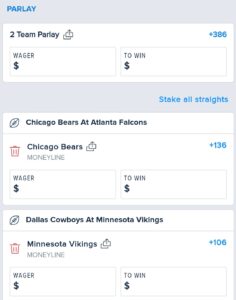 We’ll start off our longshot parlay with the Bears on the moneyline. If we look at their recent performance, we see that they could have won either of their last two games, where they lost by one to the Lions and by three to the Dolphins.

Meanwhile, the Falcons are on a two-game losing streak of their own. The difference here is that their quarterback play has been much worse. Marcus Mariota has combined for 5.94 yards per attempt in his last two games. I’ll take the value on the Bears here.

To finish off this parlay, we’ll go with what might be the most disrespected 8-1 team I’ve ever seen. The Vikings are coming off a huge upset win in Buffalo, only to come home as underdogs to the Cowboys, who just blew a 14-point lead against the Packers.

While Minnesota has won several close games, we can’t diminish what they’ve been able to do this year. Justin Jefferson and Dalvin Cook are each playing at high levels, while the offensive line has given Kirk Cousins enough pass protection to excel. Take the better team at plus-money in this spot. 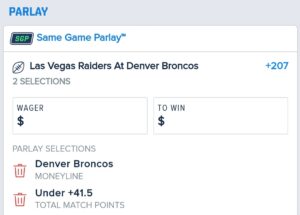 When you look at this Raiders team, you see a group of players that seem to have tuned out head coach Josh McDaniels. You can see it with the way Derek Carr spoke at the post-game press conference in Week 10. This is a disappointing team that is clearly trending downward.

Vegas is now on a three-game losing streak, combining for only 40 points during that span, including a shutout loss at New Orleans. They now take on one of the best defenses in the NFL. Per Football Outsiders, Denver ranks third in pass DVOA, so they’ll likely make it difficult for Carr.

Broncos games have also trended Under with an average of 31.1 combined points per game. Their only game that totaled Over 40 points was against these Raiders, but we’ll ride with the larger sample here. Expect a low-scoring game between two of the most disappointing teams in the NFL.