Football is finally here, which means that it’s time to take a look at the top Week 1 NFL parlays. The first week of the season is a great opportunity to get ahead of the market on undervalued teams.

In this article, you’ll find the best football parlay bet along with a longshot and Same Game Parlay for Week 1.

Let’s dive in to discuss the top parlay picks this week. 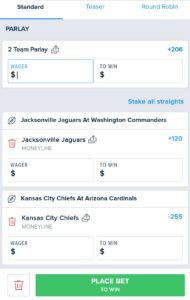 The Jaguars check all of the boxes of what you look for in a surprise team: talented quarterback, improved supporting cast, and upgraded coaching staff. New head coach Doug Pederson is going to really help out Trevor Lawrence take the next step in his development.

Jacksonville takes on a Commanders team that struggled at defending the pass last season. They’ll also be without top pass-rusher Chase Young for this game. Look for Lawrence to connect with new wideout Christian Kirk early and often as the Jags pull off the upset.

The Chiefs start out the year on the road against a Cardinals team that will be without DeAndre Hopkins for the first six games of the season. Arizona allowed top pass-rusher Chandler Jones to depart in free agency without finding an adequate replacement.

That’s bad news against a Kansas City team that boasts one of the top offensive lines in the NFL. Patrick Mahomes should have a clean pocket to pick apart this secondary. Look for new addition JuJu Smith-Schuster to make an immediate impact for the Chiefs here. 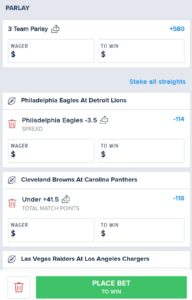 The Eagles are being undervalued as short road favorites, even against an improved Lions team. Philadelphia has an excellent supporting cast surrounding Jalen Hurts, including an elite offensive line and a terrific set of pass-catchers that includes A.J. Brown, DeVonta Smith, and Dallas Goedert.

The Browns vs Panthers game looks like a complete slugfest. Look for Cleveland to struggle to put points on the board with Jacoby Brissett at quarterback. Brissett is a checkdown machine, which means fewer big plays for the Browns. Carolina is still a work in progress on offense, even with Baker Mayfield.

The Chargers and Raiders is an AFC West clash that features a mismatch. Los Angeles added Khalil Mack to a vaunted pass-rush that includes Joey Bosa. On the other hand, Las Vegas has one of the worst offensive lines in the NFL. That’s bad news for Derek Carr in this spot. 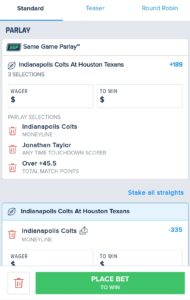 The Colts should be an improved team with Matt Ryan under center. The veteran quarterback will help stabilize the offense following Carson Wentz‘s erratic play last season. While I think they’ll take care of the Texans, I’m not comfortable laying 7.5 points on the road, so we’ll take Indy on the moneyline.

Jonathan Taylor had over 80 red-zone carries last season, which was nearly twice as much as the second-highest rate. He’s an elite running back who is absolutely fed near the endzone. Look for Taylor to score a touchdown here, especially since it’s against one of the worst defenses in the NFL.

I’ll finish off this parlay with the Over since 45.5 total points is a low bar to clear. The Colts have a good chance at scoring 30 points in this game, so it feels safer to side with the Over. Texans quarterback Davis Mills showed flashes last season. There’s some young talent here with Nico Collins and Dameon Pierce.