The San Francisco 49ers host their NFC West rivals the Seattle Seahawks to kick off Wild Card Weekend on Saturday at 4:30 p.m. ET. The second-seeded 49ers won both regular-season meetings with the seventh-seeded Seahawks, most recently beating them 21-13 in Seattle in Week 15.

San Francisco has won 10 consecutive games heading into the postseason, while Seattle won its final two games, but did lose five of its final eight overall. The 49ers won in the Wild Card Round last season in its first appearance in a wild card game since 2013.

Pete Carroll has guided the Seahawks to 10 playoff appearances in 13 seasons, but they have lost in two of their last three wild card game matchups.

The 49ers are favored to win by more than a touchdown, but they are expecting a rookie quarterback to pilot the offense, and Seattle may make this more of a tighter game than some observers are expecting.

Before reading Scott Engel’s picks, toggle with the widget below for our full list of NFL Wild Card player props:

NFL Wild Card odds used in these parlays are current as of Wednesday, Jan. 11, at BetMGM Sportsbook. 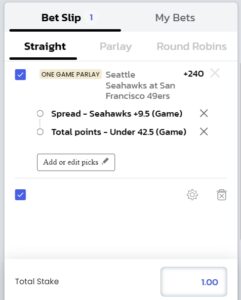 I am not expecting this to be the blowout that many will wager on, as it is difficult to beat the same team three times in a season. While I am not predicting a Seattle win, its familiarity with San Francisco as a divisional rival can ensure that the team will be well-prepared for this third matchup.

The key here is that Carroll and defensive coordinator Clint Hurtt may be able to expose the overall inexperience of Brock Purdy. While the rookie has been on an inspirational six-game run, the postseason is when the good times might stop rolling.

The Seattle defense has played better recently, allowing 16.7 points per game in its last four. But the Seahawks’ offense scored 20 points in two games vs the 49ers this season, so we are likely in for a defensive game that may not be decided until late.

Ultimately, Christian McCaffrey and George Kittle will make pivotal plays against a defense that can be exposed more by RBs and TEs with Jordyn Brooks (knee) out for the year. But Seattle’s secondary has played well and won’t give up much to Purdy for a good chunk of the day while the Seahawks stick close for a while.

These rivals won’t make much offensive noise in the first half and it could be a tie game that includes a pair of field goals, or each team matching the others’ low output after a scoreless first quarter. I expect both QBs to struggle early, while the Seattle defense keys on McCaffrey.

The Seahawks won’t be able to run the ball consistently and it will be difficult for them to score more than one TD. Purdy will face some adverse passing situations which will not be easy to convert against the Seattle secondary.

I could see this being a battle of kicks between Jason Myers and Robbie Gould, but ultimately the Seahawks’ defense will spend too much time on the field. McCaffrey or Kittle will put the game away with a big play or a TD.