The San Francisco 49ers and Philadelphia Eagles face off in a clash between the two top teams in the NFC.

Both teams are stacked with playmakers, making it ideal to build Same Game Parlays.

In this article, we’re going to provide two San Francisco vs Philadelphia parlays: one best bet and one longshot for the NFC Championship.

NFC Championship Game odds used in these parlays are current as of Friday, Jan. 27, at Caesars Sportsbook. 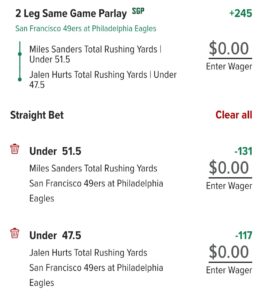 The 49ers have an elite run defense, ranking second in Rush DVOA, per Football Outsiders. Opposing running backs are averaging only 3.3 yards per carry against them.

This makes it a great spot to go with the Under on Miles Sanders‘ rushing yards. Not only is he in a tough matchup, but the Eagles also give touches to Kenneth Gainwell and Boston Scott.

Look for the Eagles to attack this 49ers’ defense through the air, keeping Sanders below this number. Interesting note: this prop opened at 58.5 and has fallen to 51.5 yards.

It was clear that Jalen Hurts‘ mobility was affected by his shoulder injury last week, when he rushed nine times for 34 yards. That’s 3.78 yards per carry, which is well below his season average of 4.6.

Add in the fact that the 49ers have a fast and athletic defense with an elite group of linebackers. That’s going to make it difficult for Hurts to find running room, giving us a clear Under. 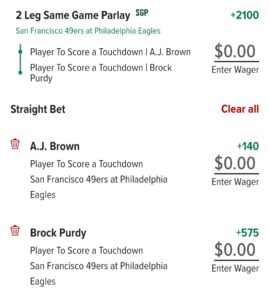 A.J. Brown failed to score a touchdown against the Giants, but we’ll go back to the well for this parlay. This is an elite wideout who scored 11 times during the season.

The Eagles are facing an elite run defense and Hurts’ rushing output is affected by his injury. That means we’re likely to see them focus on the passing game in this one.

Brock Purdy has shown that he’s a more mobile quarterback than Jimmy Garoppolo. We’ve seen the rookie rush for a touchdown twice in his last seven games, including once this postseason.

We like the value at this happening again at +575 odds, giving our longshot parlay a juicy +2100 payout.