The 2022 NFL regular season is here, and the New York Jets kick off their season at MetLife Stadium when they host the Baltimore Ravens.

New York continued its string of struggles in Robert Saleh‘s first year as head coach as they finished with a 4-13 record, their sixth straight losing season. The Jets also own the longest active playoff drought in the NFL at 11 years.

Baltimore had a down season last year, finishing 8-9 and last in the AFC North for the first time since 2007. The Ravens were on pace for the postseason, but an injury to Lamar Jackson led to them losing the season’s final six games.

Read on for our Baltimore vs New York best bets for this Week 1 matchup of the NFL season.

It’s no surprise that the Ravens are the favorites by a touchdown. Baltimore is still a playoff team, but injuries derailed their 2021 season. The Jets are a young team still looking to prove themselves, so it’ll take some time before the odds have them closer to their opponent.

Check out the best Ravens odds and Jets odds for the 2022 season.

The Jets ranked dead last in the NFL last year in scoring, averaging 18.2 points per game. However, that total is set to go up, as the offense has made some upgrades in the offseason. The Ravens ranked in the lower half of the NFL, averaging 22.8 points per game, but that average took a hit after Jackson got injured.

Ravens vs Jets Pick of the Day

Read more on this Ravens vs Jets bet below.

Baltimore’s receiving corps took a hit this offseason after the organization traded Marquise Brown to the Arizona Cardinals. Jackson still has his top target in Mark Andrews, but his top three receivers - Rashod Bateman, Devin Duvernay, and James Proche II - have a combined five years of NFL experience.

The Ravens will look to rely on the run game with the combination of Jackson and J.K. Dobbins, who is on track to return from injury in Week 1. However, if he isn’t ready, the Ravens signed Kenyan Drake as depth behind Mike Davis.

New York has a young and revamped team heading into this season, as they made significant upgrades on both sides of the ball. On offense, the Jets signed Laken Tomlinson, Tyler Conklin, and C.J. Uzomah and drafted Garrett Wilson and Breece Hall. On defense, the team signed Jordan Whitehead, D.J. Reed, and Solomon Thomas and drafted Ahmad Gardner and Jermaine Johnson II.

Injuries are already the story of this game, as Zach Wilson was ruled out during the preseason with a knee injury, opening the door for Joe Flacco to start against his former team. The Jets don’t want to rush Wilson back onto the field, so the Year 2 QB will sit against the Ravens.

The Jets have lost their Week 1 matchup the last three seasons, and that trend looks to continue when Baltimore comes to town. While the team has made upgrades across the board, taking on Jackson and company right off the bat is not an ideal start for a team looking to establish its identity.

New York had one of the worst defenses last year, and though they’ve made the necessary upgrades, Jackson will still burn them. The Jets allowed the fourth-most rushing yards and the most rushing touchdowns in 2021, which is not what you want when you go up against one of the best scrambling quarterbacks and the returning Dobbins.

Even though Flacco will be getting the start, the offense shouldn’t take a step back, as they’ve looked good in training camp against the Atlanta Falcons and New York Giants. There will be some growing pains and a feeling-out process for the offense, especially in the backfield that features the trio of Hall, Michael Carter, and Ty Johnson.

The Jets will need to rely on the passing game, as the Ravens had the best rushing defense but the worst passing defense. This is a revenge game for Flacco, as this is his first start against his former team.

Both sides will see success on offense and defense, making this a close matchup. The Jets will hang tough and stay competitive with Baltimore. However, the impact of Jackson on offense will help the Ravens squeak out the victory.

While the Ravens are the better team and should win this matchup, the Jets should keep this tight. The upgrades on both sides of the ball will make them competitive this season, and their young stars should take the next steps forward in their careers.

The Jets’ offense can potentially be dangerous, while the defense is looking to be lockdown. A lot will need to go their way if New York expects to walk out of this game with a victory, but they’ll keep it close.

Before placing this bet, get the best New York Jets promo codes.

Both teams struggled against the pass in 2021, so there should be a lot of passing in this game. Even with the young receivers in Baltimore, Jackson still has Andrews and his legs. Many young players are looking to make a name for the Jets, especially Elijah Moore, who will look to build on the momentum from last season.

Before placing this bet, get the best Baltimore Ravens promo codes.

New York had one of the worst rushing defenses last year, and even with the upgrades at all three levels, they will still struggle to stop Jackson on the ground.

Dobbins is returning from injury, so the Ravens will ease him back into things, making Jackson the main running threat. In 2021, Jackson had six games with over 61.5 rushing yards and six with over 10 carries. He can turn a broken play into a major gain and make defenders miss left and right.

Before his injury, Moore was quickly becoming New York’s No. 1 receiver. Now heading into Year 2, Moore is set to have a big season, as he’ll be the top target for the Jets.

Moore had four games last season in which he went over this total, including a 77-yard performance in his final game before his injury. The Ravens had the worst passing defense in the NFL last season, and even with all of the upgrades in the secondary, Moore will be Flacco’s favorite target. 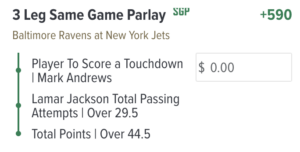 For our same-game parlay, we have a three-legger that favors the Ravens. Our first leg of this SGP features the Over at 44.5 points from our best bets.

The second leg features Jackson throwing Over 29.5 pass attempts. Jackson hit this over in nine of 12 games last season, and one of the games was when Jackson got injured. For the final leg, Andrews is now the No. 1 target in Baltimore with Brown gone. Look for the Jackson-Andrews connection to get stronger.

Gio Annatelli is a Digital Content Coordinator with The Game Day, writing and editing sports articles for the web. He is seasoned in sports, having covered and written for teams such as the New York Giants, New York Jets, and New York Islanders. Gio graduated from Hofstra University where he got his Bachelor's degree in Journalism. You can almost guarantee he's betting on a parlay.