Week 1 of the NFL season is finally here. After weeks of scouring through training camp reports and evaluating team rosters, it’s time to get this show on the road.

We’ve got an inter-conference matchup here between the Jacksonville Jaguars and Washington Commanders. The Jags hit the reset button by bringing in a new coaching staff, while the Commanders believe they have finally found a trustworthy starter at quarterback in Carson Wentz.

Let’s dive into our Jacksonville vs Washington betting tips for Week 1 of the NFL season.

The Commanders are short home favorites in a game that projects to be low-scoring. It looks like oddsmakers are undervaluing the Jaguars here, based on a disastrous 2021 season, where they were held back by poor coaching.

Take a look at the best Jaguars odds and Commanders odds for the 2022 NFL season.

Bookmakers project this to be a close game, giving Washington a slight edge because they’re at home. They aren’t expecting many points, which undervalues two offenses that should be improved this year.

Jaguars vs Commanders Pick of the Day

Find out more about this Jaguars vs Commanders pick of the day below.

The Jaguars should be much better on offense this season. New head coach Doug Pederson can help Year 2 quarterback Trevor Lawrence take the next step in his development. Additions like wideout Christian Kirk and tight end Evan Engram, along with the return of running back Travis Etienne Jr., will help.

The defense could also take a step forward, with edge-rusher Travon Walker, the No. 1 overall pick, entering the fold. Beyond Walker, there is plenty of young talent, such as pass-rusher Josh Allen and free-agent addition linebacker Foyesade Oluokun, for DC Mike Caldwell to work with.

As for injuries, it looks like James Robinson will be able to suit up for this game. He’s returning from an Achilles injury, but reports are that he’s ahead of schedule. Robinson will work with Travis Etienne Jr. in this improved Jaguars’ backfield.

On the other side, we have a Commanders team that upgraded at quarterback with Wentz and used their first-round pick on wideout Jahan Dotson. They also get back receiver Curtis Samuel and tight end Logan Thomas. Antonio Gibson will split the workload with J.D. McKissic in the absence of rookie Brian Robinson Jr..

The defense is stacked with talent up front, with Montez Sweat, Jonathan Allen, and Daron Payne. However, they will be looking to get better production from 2021 first-round pick, Jamin Davis. The Commanders did not really address their secondary, which is concerning considering how much they struggled last year.

You’ll notice that I didn’t mention Chase Young in the list above. That’s because he’s still recovering from a torn ACL and has been placed on the physically-unable-to-perform (PUP) list. They’ll need to rely on their depth to generate some type of pass rush on Lawrence.

This is the classic case of oddsmakers undervaluing a team based on their poor performance last season. We can basically throw out that rookie year for Lawrence, as he was held back by Urban Meyer‘s abysmal coaching. We’ve seen Pederson help his quarterbacks thrive in the past, namely his opponent here in Wentz.

The Year 2 breakout for Lawrence has a great chance of starting right away in Week 1. Washington did not improve its secondary, which was the downfall on defense last season. To make matters worse, the pass rush is not at full strength since Young is out for this game.

Wentz has been erratic at quarterback, which saw him traded from the Colts after only one season in Indianapolis. The fact that head coach Frank Reich, Wentz’s former offensive coordinator in Philadelphia, decided to move on after one year is a red flag. This is a quarterback who is prone to ill-advised turnovers.

The Commanders have an outside chance at finishing as one of the worst teams in the NFL this season. Look for the Jaguars to start their year off on a positive note with a road victory in Washington.

Let’s take a look at a few tips to keep in mind for this game, including exploitable matchups and interesting angles:

I’m confident that the Jaguars will win this outright, so I won’t take them against the spread, especially since it’s juiced up. Jacksonville has the quarterback and coaching advantage here. The Wentz experiment is likely to go poorly for the Commanders.

We’re getting terrific value on the Jaguars at (+120) odds. Keep in mind that they essentially added two first-rounders to their roster this year — Walker in the 2022 draft and Etienne, who makes his NFL debut after missing the entire 2021 season.

They were also extremely active in free agency. There’s a lot to like here.

Look for the Jaguars to capitalize on the Commanders’ deficiencies in pass coverage in our NFL pick of the day.

Before placing this bet, get the best Jacksonville Jaguars promos.

I’m going with a longshot prop in this spot. Don’t underestimate Lawrence’s rushing ability, as he went for 334 yards on the ground during his rookie season, including two touchdowns.

I like the value at +400 odds because I think that Pederson will allow his Year 2 quarterback to utilize his legs more this year. This is an underrated weapon in Lawrence’s game. 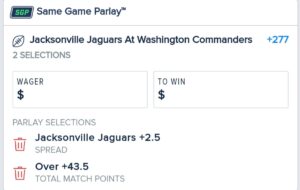 We can protect ourselves in the event that the Jags lose by only 1-2 points by parlaying them on the point spread with the Over. This total has a low bar to clear at 43.5 points, especially with how I think the Jags will take advantage of the Commanders’ pass defense.