Week 2 features an inter-conference clash between two teams that opened their seasons with a home loss. Each team desperately needs to avoid an 0-2 start, but only one has a healthy starting quarterback.

The Cincinnati Bengals suffered a disappointing defeat in overtime to the division rival Pittsburgh Steelers. It was a day to forget for Joe Burrow, who threw four interceptions while being sacked seven times.

The Dallas Cowboys had an ugly 19-3 loss to the Tampa Bay Buccaneers. To make matters worse, they lost Dak Prescott for multiple games. That’s terrible news for a team that already had offensive struggles with a limited group of pass-catchers.

Let’s dive in to find out the best Cincinnati vs Dallas best bets for Week 2.

It’s no surprise to see the Bengals as 6.5-point road favorites with Cooper Rush starting at quarterback for the Cowboys. The 43.5-point total also looks right, given the dysfunctional Dallas offense.

Take a look at the best Bengals odds and Cowboys odds for the 2022 NFL season.

Bookmakers project Cincinnati to take care of business on the road with Dallas struggling to put points on the board.

Bengals vs Cowboys Pick of the Day

Read more on this Bengals vs Cowboys bet below.

The Bengals’ star wideout Tee Higgins should be good for this game after leaving early with a potential concussion in Week 1. Even still, it’s likely that the team will lean on more runs from Joe Mixon, as they’re projected to control this game.

The Cowboys have a severely limited group of pass-catchers. When Noah Brown is your second wideout, you know you’re in trouble. It’s going to be even tougher to move the ball with Rush at quarterback.

Cincinnati lost by a field goal in overtime despite losing the turnover battle 5-0 in Week 1. That tells you that they should have definitely won that game if they were just able to protect the football.

Burrow did a nice job leading a comeback in the second half and forcing overtime on what was a tough day where he was constantly under duress. I would expect a bounce-back performance against the Cowboys.

Dallas desperately needs Michael Gallup back to ease the pressure off CeeDee Lamb, who will face bracket coverage given their deficiencies at ancillary wide receivers. It’s difficult to envision a scenario where the Cowboys keep pace with a high-flying Bengals offense.

The Cowboys will need to win this game with their defense and running game. Forcing a bunch of turnovers would also help in this regard. I can’t see that happening, especially with how their offense can really struggle here, putting their defense in unfavorable situations.

Look for the Bengals to run the ball effectively with Mixon here, as the Cowboys just allowed Leonard Fournette to rush for 127 yards on only 21 carries.

Here are a few tidbits to consider for this Week 2 matchup:

Yes, 7.5 points is a large number to lay on the road, but it makes sense in this situation. Dallas was already struggling to score points with Prescott, so imagine how it may look with Rush at quarterback.

It’s huge that we’re getting this spread below the key number of seven, as we merely need Cincinnati to win by a touchdown for this wager to hit. There’s a chance that they take care of business by multiple scores here.

Look for the Bengals to bounce back against Rush and the Cowboys.

Before placing this bet, get the best Bengals promo codes.

Mixon should provide strong production here, as it’s a favorable game script with the Bengals as 7.5-point favorites. This means that they’re expected to play with a lead, resulting in more touches for Mixon.

The Cowboys’ defense just got gashed on the ground by Fournette and the Bucs. Mixon racked up 27 carries against the Steelers, so the volume will be there. It also helps that Higgins may be out, which could see Cincinnati lean more on Mixon.

Before placing this bet, get the best Cowboys promo codes. 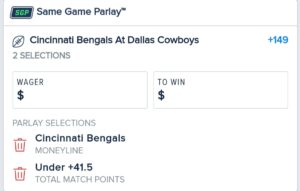 We’ll hedge against the risk that the Bengals win the game but fail to cover the spread by rolling with the moneyline in this parlay.

While Dallas should have a tough time scoring points, I do expect their defense to step up a bit and keep the Bengals at bay. This makes the Under a safer pick.