The Ohio State Buckeyes will head on the road to Happy Valley to take on the Penn State Nittany Lions for a massive Big Ten East matchup.

Ohio State is ranked No. 2 in the nation after winning their first seven games, and have done so without as much as a chink in the armor. The Buckeyes are averaging a 35-point margin of victory this season, and are fresh off a 54-10 win over Iowa.

Penn State was overpowered two weeks ago against Michigan, and outside of a pick-six late in the first half, were dominated in a 41-17 loss.

But, the Nittany Lions bounced back at home last week against Minnesota, running the ball effectively and trouncing the Gophers, 45-17.

Ohio State opened as over a two-touchdown favorite, and as of Friday, Oct. 28, the Buckeyes are 15.5-point favorites.

The total of 61 is around the average of Ohio State this season, but it is the second-highest of the year for the Nittany Lions.

The oddsmakers are projecting the Buckeyes to continue their dominant run through the Big Ten with a decisive win on the road against Penn State.

Ohio State vs Penn State Pick of the Day

Read more about this OSU vs PSU bet below.

I just don’t see Penn State being able to stop this Ohio State offense for 60 minutes. But, that doesn’t mean Penn State can’t keep this game close and within the number.

The Buckeyes’ offense is arguably the best in the country and is beginning to approach the ranks of best offenses of the last decade with Heisman favorite C.J. Stroud at the helm.

Stroud has been lights-out this season, completing 70% of his passes for 2,023 yards and a nation-high 28 touchdowns.

There are at least four NFL-caliber players in the wide receiving room alone including Emeka Egbuka (41 rec/735 yards/seven TDs), Marvin Harrison Jr. (38/598/10), and the now-healthy Jaxon Smith-Njigba, who has played in just three games this season.

And it’s not as if they can’t run the ball, as they’re third in the Big Ten averaging 204.9 yards per game on the ground.

The Penn State offense led by senior quarterback Sean Clifford is unremarkable and grades out around the middle of the Big 10 in scoring and total offense.

Penn State’s key to victory is to keep this Ohio State offense off the field. And they should have some success running the ball, as the Nittany Lions are fifth in the Big Ten averaging 178.4 rushing yards per game.

Freshman Nicholas Singleton has been the lead back and a pleasant addition, leading the team with 561 yards and seven touchdowns while averaging nearly seven yards per carry.

Penn State’s defense ranks in the middle of the pack in the Big Ten, and they were gashed by the Michigan rushing attack — allowing 418 yards and four rushing scores — just two weeks ago.

So, even with all the talent at quarterback and in the passing game, look for Ohio State to keep it on the ground in this game.

Consider these OSU vs PSU betting trends before placing your NCAAF bets:

Penn State is no doubt going to have problems slowing down this Ohio State offense, but if they can just get a couple of stops early and control the clock, they’ll be able to keep this game within the number.

This is Ohio State’s biggest test to date, so I’m backing the Nittany Lions to hang around in this game at home.

Total Points Under 61 (-110) at Caesars Sportsbook

Again, if Penn State has any chance to win or keep this game close, they’re going to need to control the time of possession and keep their defense off the field.

Both of these teams have solid defenses and in a big road game, the Buckeyes’ high-powered offense comes out unusually skittish. And that slow start is enough to keep this total Under.

It’s just the second time Strout has played on the road against a ranked opponent, and with the Penn State fans behind this defense, this could be a slow start for the Buckeyes.

The Penn State defense had two weeks to prepare for the Buckeyes, and they’re able to control the clock and lean on the home-field advantage to keep the Buckeyes’ offense in check. 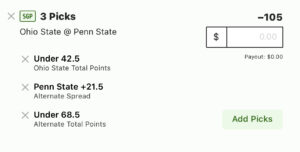 This parlay gives you nearly an extra full touchdown on the spread, the total, and the Buckeyes team total at (-105).

If you believe that the Nittany Lions are going to be able to have some success with keeping Ohio State off the field and play solid enough defense to keep them in it, this is a great way to bet on this game.