The Washington Wizards should be one of the Eastern Conference’s more interesting teams this coming season. Even though they’re getting very little consideration to qualify for the postseason, this squad may have what it takes to make a surprise appearance.

With top-end talent in Bradley Beal, a solid second option in Kristaps Porzingis, and some impressive depth in the form of Delon Wright, Will Barton, Monte Morris, and Kyle Kuzma, to name a few, this is a well-rounded roster that could keep things interesting throughout the season.

There’s tons of value to be had when it comes to betting on the Wizards this year, so let’s take a look at some of the best sportsbooks and sports betting promo codes for wagering on Washington in 2022-23.

Sign up today at Caesars Sportsbook with our exclusive promo code “" and get your first bet on Caesars up to $1,250.

Wizards rookie Johnny Davis had an uninspiring Summer League performance, averaging just 8.3 points per game on abysmal shooting percentages before he was shut down due to a minor back injury. As unfair as it may be, those few games have tanked his Rookie of the Year odds, and as such, he’s down to (+3000).

Fortunately, this is a ripe time to strike for sports bettors. Davis is a better player than the odds imply, and considering that the Wizards used the 10th overall pick in this year’s draft to select him, it’s in their best interest to quickly develop him.

A high-volume scorer and an efficient rebounder at his position, Davis could make a surprising push up the ladder if he can boost his shooting percentages and earn a significant enough role off the bench. Rookie of the Year is a high bar for him to clear, but since this bet is risk-free, it may be worth a gamble.

Find out more about this betting site’s welcome offer in our Caesars Sportsbook review.

New bettors: Choose BetMGM Sportsbook and get your first bet risk-free up to $1,000 when you use the promo code “" when you sign up.

I don’t think the Wizards will win the division. It looks incredibly unlikely given the fact that they’re up against the Miami Heat and new-look Atlanta Hawks, who both figure to play a more significant role in the playoff race.

With that said, (+4000) is a huge number. Washington is a longshot to win the division, but probably not that much. The Heat could tumble down the standings in the event of a few injuries, and we’ve yet to see how the Hawks will perform with Dejounte Murray and Trae Young in the backcourt.

The odds are certainly not in favor of the Wizards, but since this bet is risk-free, a sprinkle should be relatively harmless.

Learn about how risk-free bets work in our BetMGM Sportsbook review. 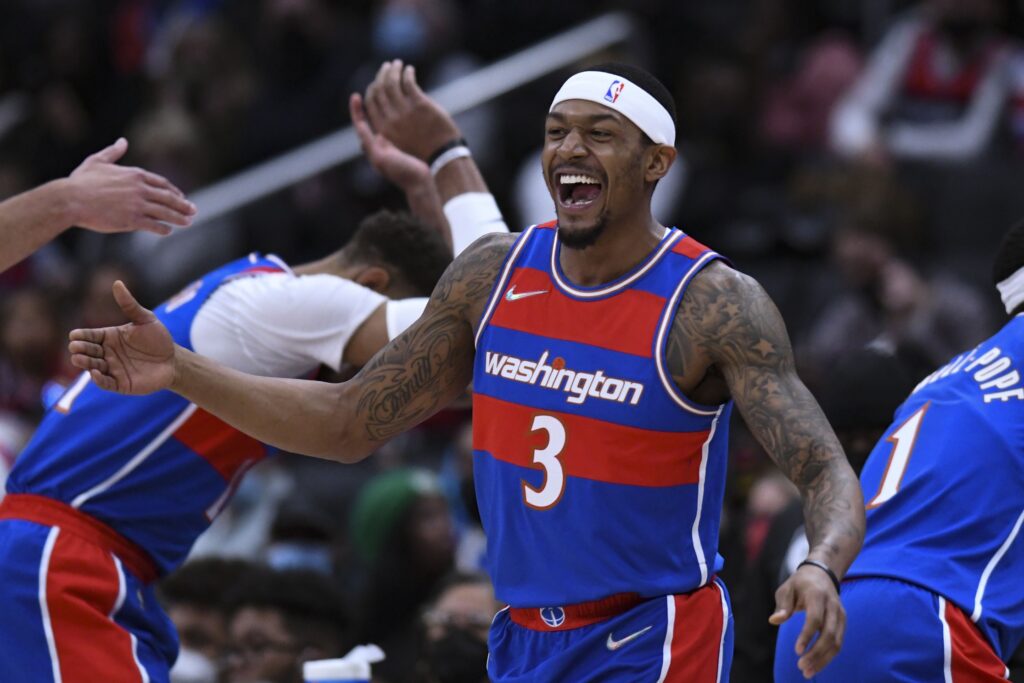 New players at BetRivers Sportsbook can get a 100% first deposit match of up to $250 when they use our exclusive promo code “" at sign-up.

When healthy, Beal is one of the game’s most prolific scorers. After averaging 30.5 points per game in 2019-20, he took it up a notch and posted an average of 31.3 points in 2020-21. The latter total would’ve won him the scoring title had he done it this past season, but alas, wrong place at the wrong time.

Now that Beal is healthy again, there’s reason to be optimistic about his All-NBA chances. He cracked the All-NBA Third Team in 2021, even after missing nearly 20% of the season due to injury.

He’ll be competing directly with guys like DeMar DeRozan, Damian Lillard, and other high-scoring guards for this honor. Should either of them have down years, Beal could be next in line, making this a worthwhile way to spend your BetRivers bonus money.

Learn more about how your bonus money works in our BetRivers Sportsbook review.

New players at Betway Sportsbook can get a risk-free bet of up to $250 when they sign up using the link below. Click “Get Bonus" to start betting.

This is another interesting wager. Betway has the Hornets and Knicks favored over the Wizards to make the playoffs this year, but honestly, it seems like Washington has a much better shot than either of those two teams.

Charlotte is still rather unpredictable since it has yet to re-sign forward Miles Bridges, who was arrested in the offseason. The Knicks, on the other hand, are the Knicks. Even after adding Jalen Brunson, it’s not looking great for them.

The Wizards have plenty of upside, and with very little pressure on them to perform, they could be one of the more surprising teams of this coming season. A playoff appearance isn’t out of the question, which makes this bet at (+380) odds a tremendous value.

Read our full Betway Sportsbook review to find out more about what this betting site offers.