The 2022 NFL season is just around the corner, which means it’s time to start placing NFL bets for the upcoming campaign. The Philadelphia Eagles are an interesting team to focus on as they look to earn their first playoff victory since the team won Super Bowl LII.

Philadelphia is coming off a season in which it finished second in the NFC East at 9-8. The Eagles were eliminated in the NFC Wild Card Round for the second time in three years.

With so many Eagles bets to consider at different sportsbooks, let’s go over the best Philadelphia Eagles betting promo codes to take advantage of.

Sign up with the promo code  to get a risk-free bet of up to $1,500. New players can also click “Get Bonus" below to receive this excellent welcome offer.

It is clear that the NFC East should be a two-team race between the Eagles and Cowboys. Dallas has the best odds to win the division at (+115), but Philadelphia has a strong chance to wrest the division crown away.

The big key for the Eagles will be if Jalen Hurts can take significant steps forward as a passer. Last season, decision-making and accuracy were concerns, as Hurts’ 61.3 completion percentage ranked 26th in the NFL.

Hurts now has a stronger pass-catching crew with the big addition of A.J. Brown to combine with ascending wideout DeVonta Smith and Dallas Goedert, who is one of the best tight ends in the NFC. If the pass rush improves as hoped, the Eagles can have an even better chance of overtaking the Cowboys.

Read our Caesars Sportsbook review for more information about this betting site.

Bettors at BetMGM get up to $1,000 risk-free when they register for a new account. Use promo code to get this special offer. 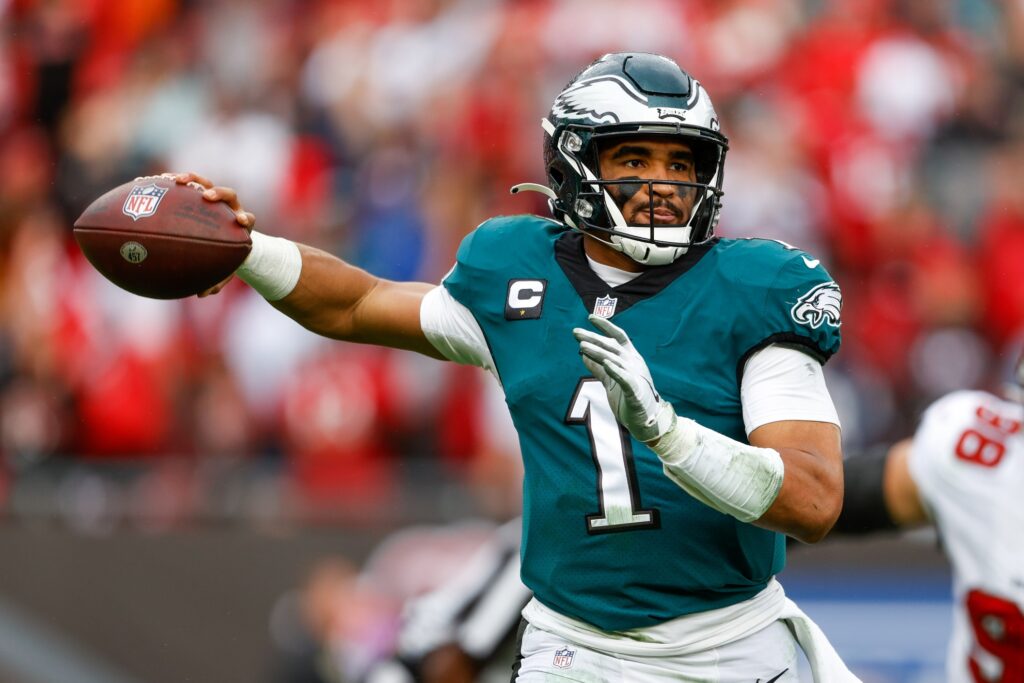 After Hurts’ uninspiring performance in the NFC wild card game against the Buccaneers, this sort of longshot wager may be initially hard to stomach. He was intercepted twice and rushed for only 39 yards, as Tampa Bay dared him to throw and he only came through with one TD pass and 258 yards.

But Hurts can also use that loss as a motivator to progress to better form in 2022. He spent the offseason working with a renowned quarterback guru, and the Brown addition can certainly help him to improve as a passer. The addition of a true No. 1 wideout also makes his receiving crew deeper, and Brown is a perfect fit for Hurts, as he will give him a big, reliable target over the middle and also gain much yardage after the catch.

Hurts is already an established major threat as a runner. Last season, he led all NFL quarterbacks with 784 rushing yards and 10 TDs. The latter number tied for sixth in the league,

If Hurts makes the necessary strides as a passer, he has the playmakers to help him elevate his game and emerge as one of the premier dual threat quarterbacks in the league. The Eagles don’t have a feature back or an outstanding group of running backs to depend on, so Hurts has to be the focal point of the offense as a two-way player.

The Eagles’ fortunes rest squarely on the shoulders of their young quarterback, and there is a real chance that he responds with improved play that pushes the team to a division title and at least a playoff win. If Hurts has the determination to raise his game, he does have the weaponry, and can deliver a major breakthrough season.

Read our comprehensive BetMGM review to find out more.

New players at BetRivers get up to $250 free as a first deposit match. You can use The Game Day’s Eagles sportsbook bonus by using the code .

Eagles To Be Defeated In NFC Championship Game (+1000)

As we have indicated, how Hurts performs will likely determine the ultimate fate of the Eagles this season. If he makes significant enough improvements, Philadelphia can win the NFC East and make a deep playoff run.

Tampa Bay and the Los Angeles Rams should be considered solid favorites in the NFC again, but after that, there is a possible path to the Eagles being the next-best team in the conference and not being knocked off by one of those two opponents until the NFC Championship Game.

If the Eagles can earn a top two or three seed in the NFC, then the road to the conference title game becomes realistic to navigate. The Eagles would have a good chance of defeating a lower-seeded opponent in the first round, and could battle hard for a second-round victory.

Nick Sirianni added five wins last year, and the goals will have to be higher this season. The defensive front, which only generated a measly 29 sacks last season, has elevated its outlook with the additions of pass rush specialist Haason Reddick and top lineman Jordan Davis, one of the best available players at his position in the 2022 NFL Draft.

Sirianni and Hurts, plus an improved defense, could potentially catapult the Eagles to an NFC title game appearance, where they ultimately may bow out while spurring greater hope for the 2023 season.

You can take advantage of Betway’s welcome offer after completing the registration process. No promo code is needed, just click one of our links to receive a risk-free bet.

Sirianni showed his potential to win this award last season when he overcame a terrible start to guide the Eagles to the playoffs. Now, he is set to pilot his team to greater heights.

Philadelphia lost five of its first seven games last year and appeared headed for a disastrous season under the first-year head coach. But the Eagles then won seven of their next nine games. Ultimately, they became just the fifth NFL team to reach the postseason after losing six of its first nine games.

At midseason, Siranni strapped in and gained the confidence of his locker room, and implored his players to rally with an eye on steps to victories rather than focusing on the big picture. He won over his team and also has a quality cast of assistants to help him reach higher aspirations in his second season.

If Siranni and offensive coordinator Shane Steichen can continue to mold Hurts into a better passer this year, Philadelphia could conceivably emerge as one of the best teams in the NFC. The coach/quarterback dynamic will be a big factor in determining how far the Eagles will go.

Last year, Siranni took the Eagles from four to nine wins. If he adds more victories to the bottom line again, he could be honored for his efforts,

Find out more about Betway in our detailed review.