One of the many teams entering the 2022-23 NBA regular season with a new look is the New York Knicks. After signing free agent point guard Jalen Brunson in free agency, the franchise may finally have the star-caliber floor general it’s been desperately seeking for some time now.

Time will tell if this gamble pays off for New York, but we can start to get an idea of how they’re projected to perform this season by looking at the odds. Because this team is something of a wild card, they’re also one of the best teams to bet on heading into the new season.

To help you get prepared to wager on the Knicks, we’ve put together a list of the best sportsbooks and promo codes for betting on New York in 2022-23.

If you’re new to Caesars Sportsbook, you can sign up today with the promo code to get your first bet on Caesars up to $1,250.

After playing sidekick to Luka Doncic in Dallas last season, Brunson will get to take on a more significant offensive role with the Knicks. New York still has a few other mouths to feed in RJ Barrett and Julius Randle, but neither of those players demand the usage that Doncic does.

With this larger opportunity, there seems to be a path ahead for Brunson to win Most Improved Player in 2023. He’ll need to bring up his scoring average by quite a few notches to even be considered for the award, but seeing how he recorded a little more than 16 points per game last season, that should be attainable.

Brunson will have stiff competition in the race — Anthony Edwards and Tyrese Haliburton are favored over him — but if Brunson can take a leap and become an All-Star for the Knicks, he’ll have to at least be considered.

New players at BetMGM Sportsbook can get up to $1,000 risk-free when they sign up with the code .

This is hardly a bet that I would recommend making under normal circumstances, but because we can pair it with BetMGM’s risk-free offer, it’s at least worth thinking about. If you use your first risk-free bet on this line, you’ll still get your wager back in the form of free bets if it loses.

There’s not a strong case for the Knicks to win the division given the strength of the opposing teams in it. Boston looks primed to return to the NBA Finals, the 76ers are running it back with Joel Embiid and James Harden, and the Raptors are getting better with each year.

With that said, injuries and other factors can always derail campaigns, and a few of those could really open the door for New York to take the division. Additionally, if Randle, Brunson and Barrett can each have All-Star-worthy seasons, they could lead this team to a surprising season.

Read our hands-on BetMGM review to find out more about this sportsbook’s welcome bonus. 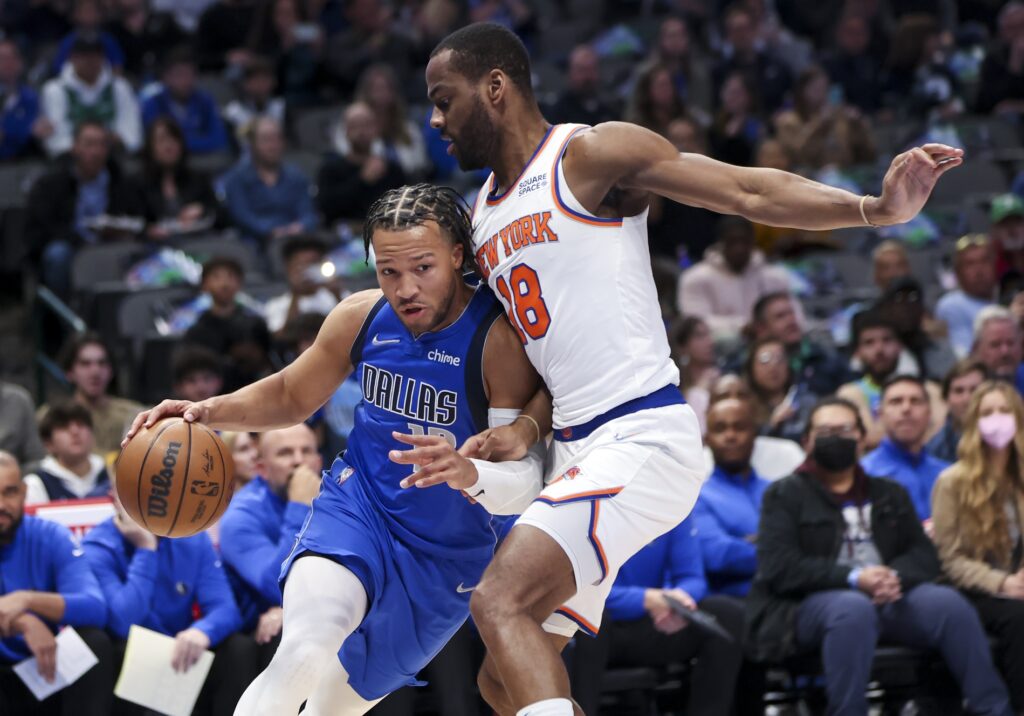 New players: Click “Get Bonus" below or sign up with the code at BetRivers Sportsbook to get a 100% first deposit match of up to $250.

This is another longshot, but considering Immanuel Quickley‘s age and role on this team, he seems ready to take a considerable step forward this season. In the event that he does, he could certainly be in position to win the NBA’s Sixth Man of the Year award in 2023.

The main issue that’s plagued Quickley throughout his career is his efficiency. We know he can go off for scoring bursts, but he doesn’t do it consistently enough for him to be a real threat. In each of his first two seasons, he’s failed to shoot above 39% from the field.

Should Quickley be able to take the necessary steps to becoming a more efficient shooter and bring his scoring average up this season, he could realistically be in contention for the award.

Click “Get Bonus" below to secure Betway Sportsbook’s new user bonus. No promo code is necessary to land this offer!

New York made some solid improvements this offseason, but unfortunately for them, so did the rest of the Eastern Conference. This is the toughest the East has looked in a long time, which makes this an especially brutal time to be a Knicks fan.

The Atlanta Hawks traded for an All-Star. The Cleveland Cavaliers are more experienced. Even the Washington Wizards had a pretty competent offseason. Ultimately, the teams that New York will be competing with for one of the final spots in the playoffs/play-in all made more improvements since we saw them last.

I don’t doubt that New York can compete for a play-in spot, but even if they get there, their recent playoff history doesn’t exactly make me feel confident enough to back off of this bet.

Check out our Betway Sportsbook review to find out more about this site.