The NFL season is just around the corner and if you haven’t already, it’s a great time to get your futures and season-long props in.

Sportsbooks are offering a ton of bonuses and promo codes in preparation for the NFL season, and we’ve compiled a list of the best promos and odds for the Kansas City Chiefs.

Caesars is offering an exclusive offer for The Game Day readers, just use GAMEDAYFULL to get your first bet on Caesars, up to $1,250, plus 1,000 Tier Credits and 1,000 Reward Credits!

Click “Get Bonus" below to capitalize on one of the best welcome bonuses in the industry!

The Chiefs, led by Patrick Mahomes, are perennial contenders. They’ve made the playoffs in four consecutive years, playing in two Super Bowls, and winning one. And the expectation is to be back in contention this season.

The loss of Tyreek Hill is undoubtedly a big one, but the Chiefs added speedy wide receiver Skyy Moore out of Western Michigan in the second round of the draft, signed JuJu Smith-Schuster to a one-year deal, and superstar tight end Travis Kelce is still on the roster.

Kansas City’s defense was much improved last season, finishing eighth in the NFL in scoring. Even so, the Chiefs invested two first-round picks and five of their first six picks on the defensive side of the ball – trading up to grab cornerback Trent McDuffie out of Washington and taking DE George Karlaftis out of Purdue – both of which fill key needs.

One of the major issues for the Chiefs was the pass rush, finishing 29th in the league in sacks. With the return of Chris Jones and Frank Clark — and adding Karlaftis — that unit should be much improved in 2022.

With an improving defense and one of the best offenses in football, this team can easily make a run and win their second Super Bowl in four years.

BetMGM is offering players a special $1,000 risk-free bet. Just click this link below and create your account using promo code to get your first bet risk-free.

If you want to learn more about BetMGM, you can read Anthony Cervino’s comprehensive BetMGM Sportsbook review.

Yes, the AFC West is now one of the strongest divisions in the NFL with the Los Angeles Chargers emerging behind their young star quarterback Justin Herbert, the Broncos adding Russell Wilson, and the Raiders adding superstar wideout Davante Adams. However, the Chiefs will continue their rule over this division.

The draft made it clear the Chiefs knew they needed to improve the defense — especially the pass rush — to manage a division with four of the best offenses in the league.

The Chiefs have won the AFC West for the last six years. Even after starting 3-4 last season, they won nine of their last ten games to secure the division and their playoff spot.

This is the best number we’ve seen for the Chiefs to win the AFC West in the last few years, and even with an improved division, they’re the most proven team in the AFC West and worth a bet to continue their divisional dominance. 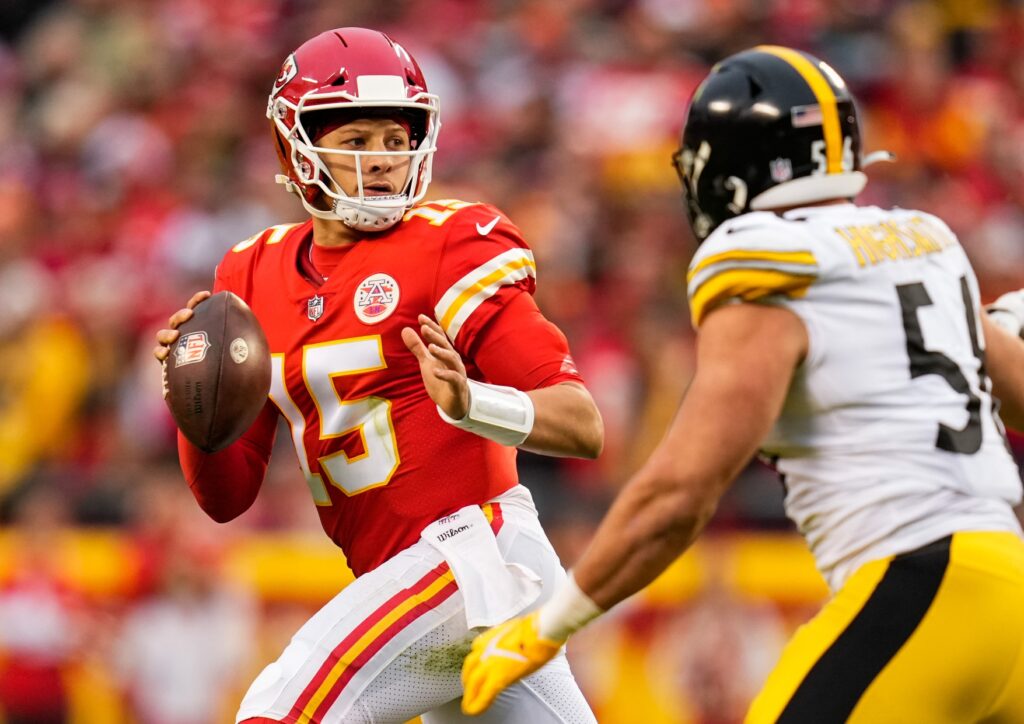 Looking to sign up with BetRivers Sportsbook? New players can get a first deposit match of up to $250 when they use the promo code .

Not only did the Chiefs use a second-round pick to help the wide receiver room, but they also signed JuJu Smith-Schuster to a one-year deal. He’s dealt with injury problems over the last couple of seasons since breaking out in 2018 and played in just five games last season. However, this is a great bounce-back spot for the 25-year-old.

The Chiefs have plenty of targets opening up with the loss of Hill, and when JuJu has played more than 12 games, he’s racked up over 800 yards in each of those seasons. And that was with a noticeably aging and declining Ben Roethlisberger throwing him the ball.

JuJu has a real chance to be Kansas City’s No. 1 wide receiver, and even with Kelce leading the way, there are plenty of mouths to feed in this high-powered passing offense. The running back room is weak, as it has been over the last five years, and even adding Ronald Jones through free agency won’t be enough to fix it.

Smith-Schuster to win Comeback Player of the Year (+2000), is also an intriguing long-shot, but with four quarterbacks winning the award in a row, I feel more comfortable taking Over 800.5 receiving yards instead.

New signups at DraftKings can get $200 in Bonus Bets when they , create an account using promo code GAMEDAY200, deposit at least $5, and place a $5+ wager on a pregame moneyline in any sport as their first bet.

Kelce will need to step up in a big way for this Chiefs offense without Hill and the young wide receiver core. Kelce is coming off of a “down season” — at least by his standards — but he had four touchdowns in the last three games of the regular season and one each in the Chiefs’ three playoff games.

Last season, Hill led the Chiefs in red zone targets (25), completions (18), touchdowns (7), and held a 31.26% target share. Kelce is widely considered one of the most dangerous red zone threats in the NFL, and although the production wasn’t there last season, he should see a big boost in target share — especially in the red zone.

If you have more questions about DraftKings, you can check out The Game Day’s hands-on DraftKings Sportsbook review.