The NFL season is almost here, making it the perfect time to take advantage of sportsbook welcome bonuses. The best way to do this is to use these free bet credits to shoot for the moon on longshot futures odds.

In this article, we’re going to dive into the Houston Texans, a team that still looks like the worst team in football despite having some intriguing players on the roster like quarterback Davis Mills.

Texans bettors can sign up with the code at Caesars Sportsbook to get a risk-free bet worth up to $1,500.

The Texans finished with 280 points last season, which was the third-fewest in the NFL. If you look at their offense, they still have among the worst skill groups in the league.

While Mills showed flashes as a rookie, he’s still one of the worst starting quarterbacks in football. Brandin Cooks is a dependable wideout, but Nico Collins is unproven and John Metchie is a rookie. The backfield is also questionable with Marlon Mack, Rex Burkhead, and Dameon Pierce.

There are simply too many question marks on this offense right now. There’s a good chance that they score the fewest points in the league this year, making them worth a look at (+500) odds.

Read our hands-on Caesars Sportsbook review to learn more about this bonus.

Texans bettors can sign up today at BetMGM Sportsbook to earn a risk-free bonus of up to $1,000. Simply use the promo code to get yours now.

Cooks put up 90 receptions last season, which ranked 15th in the NFL. While this is certainly a longshot bet, there’s a chance that Cooks can put up 110+ catches in a ceiling outcome. This would require Mills to take the next step as a passer, which is in the range of outcomes given his solid rookie season.

You look at this depth chart and you see a ton of target opportunities for Cooks. While Collins has intriguing athletic traits and Metchie is a nice prospect, they each are still unproven. This could result in Cooks getting absolutely peppered with targets, especially as the Texans are forced to play catch-up while losing in games.

Check out our BetMGM review for more on this offer. 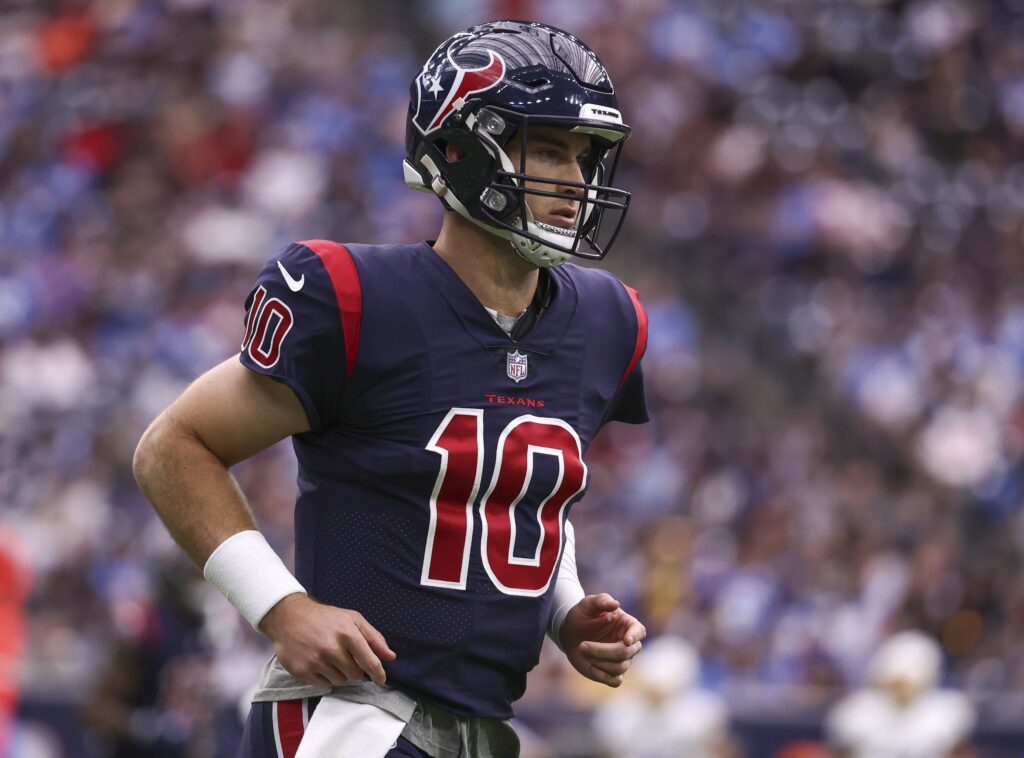 This pick isn’t as much of a longshot as the others, but we’ll take it as an alternate season wins total. The Texans went 4-13 last year, so they came close to this number a year ago. This season, there’s more of an incentive to bottom out, as the 2023 draft class is much stronger than 2022.

If Houston gets off to a slow start, say 2-10, it would be in their best interest to continue losing games as they try to tank for a future franchise quarterback C.J. Stroud. As much as these teams will deny ever engaging in this practice, it definitely happens.

When you look at the Texans’ roster, you see one of the worst in the NFL. I like getting the (+170) value by taking them to win fewer than four games.

Our BetRivers Sportsbook review has more information on this betting site.

Mills was impressive as a rookie, posting 16 touchdowns and 10 interceptions in 13 games, which was seven off the league leader Trevor Lawrence. Let’s face it, Mills was a surprise — he was not expected to start in his rookie season.

With a questionable supporting cast, we could see some regression in his second year, now that defenses have more tape on him and can adjust to his tendencies. It’s a bonus that he still threw 10 interceptions despite his rookie success.

In a full 17-game season, there’s a possibility that Mills leads the league in interceptions. We’re getting nice value at (+1000) odds.

Learn more about this betting site with our hands-on DraftKings review.