We’re gearing up for another NFL season and looking at some futures props. These are ideal wagers for your sportsbook welcome bonuses, as you can shoot for the moon with your free bet credits.

Today, we’ll be diving into the Atlanta Falcons, who look like one of the worst teams in football, but have some talented young pieces like Kyle Pitts and Drake London.

Sign up with the promo code at Caesars and you’ll receive a risk-free bet of up to $1,500. Click “Get Bonus" now to claim this welcome offer.

The Falcons are a rebuilding team, second in odds to finish with the worst record in the NFL, behind the Texans. Atlanta has Marcus Mariota at quarterback, a clear downgrade from Matt Ryan, who led the team to a 7-10 record last season.

While there are some talented weapons on offense, like Kyle Pitts and Drake London, the defense remains one of the worst in the league. This could force Atlanta into shootouts, which raises the question: Is Mariota good enough to carry a team like that? While I could see him playing like a competent starter, it’s hard to project much more than that.

Rookie Desmond Ridder is waiting in the wings, but it’s hard to be confident in much from him in his first year. This is a team in transition, poised to finish with one of the worst records. At (+350) odds, it’s worth a look here.

Find out more about this betting site’s welcome offer and more in our hands-on Caesars Sportsbook review.

Join BetMGM Sportsbook today to earn a risk-free bet of up to $1,000. All you have to do is enter the code when you register your new account.

Mariota looks like a solid bet for Comeback Player of the Year at (+1200) odds. This isn’t because we think he’ll have a huge year, but more due to the fact that he perfectly fits the criteria for this award.

The winner usually has to come back from an injury or stretch of poor play. It’s a bonus that he’s a quarterback since they have a better chance of winning due to the high value of the position. Mariota checks both these boxes.

Let’s imagine that Mariota has a solid season and establishes himself as the starter for the Falcons, at least for the foreseeable future. This helps the Falcons play better than expected, finishing with eight or nine wins. It isn’t inconceivable to envision this scenario, especially with such terrific weapons like Kyle Pitts and Drake London.

Read our BetMGM review to learn more about this sportsbook. 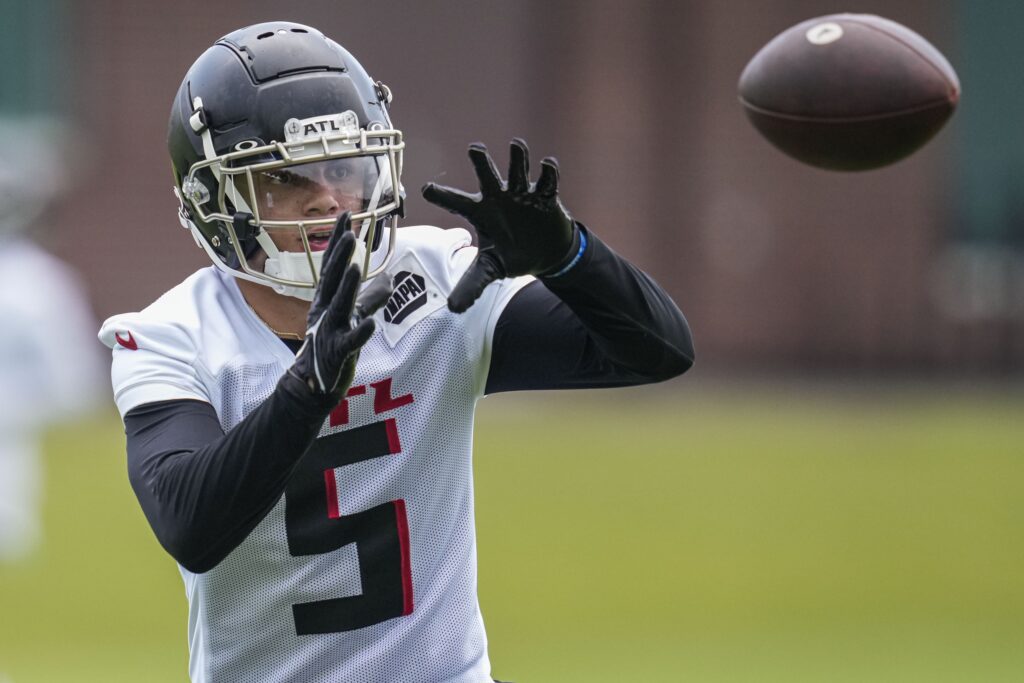 Join BetRivers Sportsbook today and get a first deposit match of up to $250 when you use the code or click “Get Bonus" below.

We’ll target the alternate season wins total market to finish it off, as we like the value on the Falcons Under 3.5 wins at (+250) odds. This wager correlates with our “Worst Record” pick that we discussed above. Simply put, the Falcons could be headed for a rough season.

It’s also in their best interest to essentially tank the year, as that would position themselves with a high pick in a 2023 draft that has a strong draft class. Could you imagine projected top pick, Ohio State star quarterback C.J. Stroud joining an offense that features Kyle Pitts and Drake London? That would be an unbelievable combo.

Our hands-on BetRivers Sportsbook review has more information about this betting site.

Deciding to sign up at DraftKings Sportsbook? Click “Get Bonus" below to get a first deposit match of up to $1,000 when you join today.

London was the first receiver off the board in a stacked class that also included Garrett Wilson, Chris Olave, Jameson Williams, and Treylon Burks. The former USC standout joins a Falcons team with an abundance of opportunity within the offense.

While Kyle Pitts will almost certainly lead the team in targets, there’s a good chance that  London emerges as the second option. He only needs to beat out the versatile Cordarrelle Patterson, which seems like a reasonable outcome.

Since there was only one first-round quarterback in Kenny Pickett, a player who may spend most of his first year on the bench in favor of Mitch Trubisky, we could see a non-QB take home this award. London looks like a fantastic bet at (+800).

Check out our DraftKings Sportsbook review to find out more about this welcome offer.