Thank you for reading our Thursday Night Football predictions all season long.

While the 2022 TNF slate is now complete, you can still keep up with the latest NFL odds and NFL betting tips throughout the remainder of the 2022 NFL regular season and playoffs.

The final Thursday Night Football contest of the 2022 season will see the Dallas Cowboys (11-4) travel to Music City to take on the Tennessee Titans (7-8) in a Week 17 interconference showdown.

The Cowboys have already clinched a playoff berth for the second straight season and remain alive in the NFC East race after knocking off the rival Eagles in a 40-34 thriller on Christmas Eve.

Tennessee’s situation is much more precarious, especially after succumbing to their fifth successive defeat on Saturday against the two-win Texans. Mike Vrabel‘s team can still claim its third consecutive AFC South title, but it will have to defeat the surging Jaguars in Jacksonville next week to do so.

This game means very little to the home team, so Vrabel could very well take the opportunity to rest some key players for a Week 18 winner-take-all showdown with the Jags.

Let’s dig into the latest odds and pick our Dallas vs Tennessee best bets for this Week 17 TNF matchup.

As of Thursday morning, the Cowboys are listed as 12.5-point road favorites according to Caesars Sportsbook. The spread has continued to surge in Dallas’ direction since last week, which isn’t a surprise since Tennessee could be without a handful of key players.

The Over/Under has continued to dip from the open of 43 and is currently set at 39.5 total points. It wouldn’t surprise me if we continue to see this number crash up until kickoff.

The Cowboys are averaging 28.9 points per game this season, exactly 11 more than the Titans’ bottom-10 unit (17.9). That is the major difference between the two teams, as both defenses rank in the top half of the league.

Tennessee’s offense has struggled throughout the year and is now expected to be without quarterback Ryan Tannehill (ankle) for the remainder of the campaign.

Rookie Malik Willis hasn’t provided much at all in the passing game in limited playing time, so that’s another reason for the home team’s conservative point total.

Take a look at the best Cowboys odds and Titans odds for the 2022 NFL season.

Read more on this top Cowboys vs Titans bet below.

After starting the season 7-3, the Titans have been a team in free fall over the last month.

Key injuries on both sides of the ball have played their part, but Tennessee was getting by thanks to an opportunistic defense and an alarmingly high red-zone touchdown percentage.

The Titans also benefited from a soft early-season schedule that saw them pile up five consecutive wins against sub-.500 teams, with the only exception being the then Carson Wentz-led Commanders.

With Willis expected to start for the second straight week, Tennessee is going to try to shorten this game by running the ball early and often. However, there’s a reasonable chance that Derrick Henry (hip) won’t play, leaving the bulk of backfield work to rookie Hassan Haskins.

On the other side of the ball, Dak Prescott will be Dallas’ key to victory in this matchup against a Titans defense that ranks second in DVOA against the run but 27th against the pass. The Cowboys quarterback has struggled with interceptions in recent weeks, but that shouldn’t be an issue against a Tennessee team with 16 total takeaways on the year.

Look for CeeDee Lamb and Michael Gallup to find holes in the secondary and put this offense in scoring positions, especially since Dallas’ one-two punch of Ezekiel Elliott and Tony Pollard should be somewhat limited, much like they were last week against Philadelphia.

I don’t see how the Titans keep this game close.

In three starts this season, Willis has averaged 78 passing yards and hasn’t thrown a touchdown pass. On the year, he has a quarterback rating of 12.0. On a scale from zero to 158.3, that’s incredibly poor.

Dallas should be able to sell out to stop the run, and while it may also have trouble running the ball against this Titans defensive front, I trust Prescott and his arsenal of weapons to move the ball efficiently down the field.

Tennessee is expected to be without at least six starters on defense, including defensive end Jeffery Simmons, linebackers Denico Autry and Bud Dupree, safety Amani Hooker and top corner Kristian Fulton, which will only make things easier for Prescott and co.

Unless something unforeseen happens, the Cowboys should win this game pretty easily.

Here are a few Thursday Night Football betting trends to consider before making your Cowboys vs Titans bets:

Thursday Night Football Unders have been on a tear of late, and Tennessee has failed to score 20 points in eight of its last 10 games. Without Tannehill and Henry, that total seems very much out of reach.

While we’ve seen Dallas run the score up on a few teams this season, I would expect the Cowboys to go a bit more vanilla once they have built a comfortable lead.

Both teams should spend most of the second half running out the clock, as they have more important games in the future. Getting out of this one healthy is the main goal.

Want to bet on the Titans? Check out the best TN sportsbooks!

While my score prediction has Dallas barely clearing this number, it’s hard to ignore that the Cowboys have scored at least 27 points in eight straight games.

Tennessee’s inability to move the ball should give Prescott and co. some short fields to work with, which should result in points for the visitors.

Want to bet on the Cowboys? Check out the best U.S. sportsbooks! 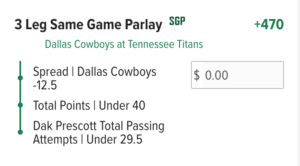 There aren’t a lot of player props available for this TNF same-game parlay because of availability questions on the Titans side of the ball.

With that being said, I like the idea of pairing the Cowboys to cover with the Under in what should be a one-sided contest. I’m also mixing in the Under on Prescott’s passing attempts, since there’s a reasonable chance we see some Cooper Rush late if this game gets ugly.