The NFL Playoffs are here, starting with the wild-card playoff round. We’ve got a full slate of postseason action, giving us six games to combine in parlays.

Let’s start the playoffs strong in our wild-card playoff round NFL parlays.

NFL Wild Card odds used in these parlays are current as of Friday, Jan. 13, at Caesars Sportsbook. 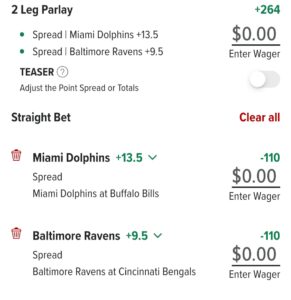 Here we have two matchups of division rivals, where we’re rolling with the heavy underdogs.

While Skylar Thompson will start, 13.5 points is still a lot in a matchup between two division rivals.

Head coach Mike McDaniel runs a terrific scheme that could help Thompson keep this game within the point spread.

Miami will have to emphasize the short passing game, hoping that Tyreek Hill and Jaylen Waddle can make big plays after the catch.

While Raheem Mostert is also expected to miss this game, Jeff Wilson Jr. has proven to be a savvy acquisition and perfect fit in this offense.

We also have the possibility of a late backdoor cover due to this high spread.

The Ravens are in a similar position with Lamar Jackson out for this game.

That leaves Tyler Huntley, who has averaged only 109.7 passing yards per game, to take the reins as starter.

If Huntley can’t go, Baltimore will be forced to go back to Anthony Brown, who completed only 44.9% of his passes against these Bengals last week.

It’s an ugly situation, but we’re betting on the Ravens to keep it within single-digits due to their strong defense and efficient running game.

This is a team that has allowed their opponents to eclipse 20 points only two times in nine games since acquiring Roquan Smith.

The offense will need to rely on J.K. Dobbins, who has been highly efficient, averaging 5.7 yards per carry this season.

Ride with the two underdogs in division games in the Dolphins and Ravens in our top NFL betting pick. 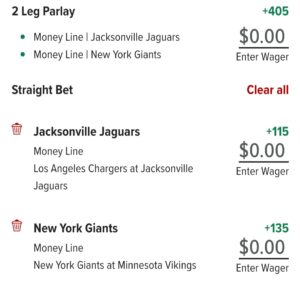 The Jaguars come into the playoffs having won six of their last seven games. They’re taking on a Chargers team that will be missing wide receiver Mike Williams.

When these two teams met in Week 3, Jacksonville won, 38-10. While Justin Herbert was clearly not 100 percent in that game, having suffered a rib injury a week prior, this was still an impressive win.

Jacksonville has the coaching advantage with Doug Pederson over Brandon Staley. We’re getting the hotter team at plus-money, and it’s an added bonus that they’ll be playing at home.

The Giants head to Minnesota to take on a Vikings team that is much worse than their record. According to Football Outsiders, Minnesota is 27th in Overall DVOA, while the Giants rank 21st.

When these teams faced each other in Week 16, the Vikings squeaked out a 27-24 win. The Giants carried a 13-10 lead heading into the fourth quarter in that matchup.

The point is, these two teams are more evenly matched than it may appear from their respective records (Giants 9-7-1, Vikings 13-4). New York is a live dog here, so we’ll take them to complete the longshot parlay.

Here we have a divisional matchup with a large point spread. I like taking the Seahawks at +10 because it’s always tough to defeat your division rival three times in the same season.

While Brock Purdy has done a terrific job for the 49ers, we still have to acknowledge that this is a seventh-round rookie quarterback. I’m giving the Seahawks the quarterback advantage here with Geno Smith under center.

Taking an underdog has a strong correlation with the Under. Look for Seattle to do just enough to keep it close in this game.