We’re on to Week 9 of the NFL season. It’s been a year full of surprises, with teams surpassing expectations (Seahawks, Giants) and others looking like major disappointments (Rams, Buccaneers).

We’ve hit a recent rough patch in our parlays, but that means we’re overdue for a big week. We’ll take a look at recent performances, pertinent trends, and head-to-head matchups to find an edge in our wagers.

Let’s bounce back with our Week 9 NFL parlays below.

NFL Week 9 odds used in these parlays are current as of Wednesday, Nov. 2, at FanDuel Sportsbook. 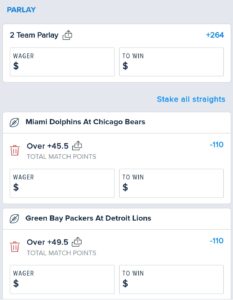 The first wager in our best bet parlay is the Dolphins and Bears Over because of how Chicago’s offense has evolved in recent weeks. After modeling their offense based on Lamar Jackson and the Ravens, Bears’ offensive coordinator Luke Getsy has allowed Justin Fields to take off, calling more designed runs for the dual-threat quarterback.

This has yielded terrific results, as the Bears have put up 29 points against the Cowboys and 33 against the Patriots, two of the more formidable defenses in the NFL. Chicago now gets to face a Dolphins defense that ranks 29th in Pass DVOA, per Football Outsiders. We may see Fields have success through the air, especially with the addition of Chase Claypool.

The Bears have also traded edge rusher Robert Quinn and linebacker Roquan Smith, two of their best players on defense, so we can expect this unit to be much weaker going forward. We saw that materialize last week in the Bears’ 49-29 loss to the Cowboys last week.

We move on to the Packers and Lions game for another Over wager. While Green Bay’s offense has been a mess without Davante Adams, this is the perfect get-right spot against a Detroit defense that ranks 32nd in Pass DVOA and 30th in Rush DVOA. This is likely to be Aaron Rodgers‘ best game of the season, and the Packers should put up points.

The Lions’ offense has also been highly effective at home, averaging 35.75 points per game. In fact, their home games have combined for an average of 71.75 points per game. The lowest total in Detroit home games was 58, which was in last week’s loss to the Dolphins. We can project the high-scoring games to continue this week against Green Bay.

We’re getting a reasonable number on the Over here due to the Packers’ struggles on offense. But I wouldn’t worry too much about that because the Lions’ defense can make any offense look good. Ride with the Over here in this best NFL betting pick. 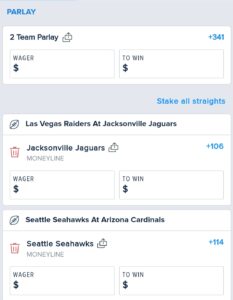 The Jaguars (2-6) are mired in a five-game losing streak, but when we look at Football Outsiders metrics, we see that this team deserves better. Jacksonville ranks 17th in overall DVOA, 15th on offense, and 20th on defense. They squandered opportunities in their last two losses against the Giants and Broncos; two games that could have been won.

They take on the Raiders (2-5), who are coming off an embarrassing shutout loss against the Saints. When you look at DVOA, you see Las Vegas ranked 26th overall, coming in at 20th on offense and 29th on defense.

They’ve really struggled to stop the pass, as they’re currently 31st in pass DVOA. We could see Trevor Lawrence get back on track here.

We go to the NFC to finish off the longshot parlay, taking the Seahawks to win outright in Arizona. It’s time to view Seattle as a legitimate playoff team. Geno Smith is currently playing at an MVP level, completing over 72 percent of his passes at 7.7 yards per attempt with 13 touchdowns and only three interceptions.

The defense seems to improve every week, as they’ve allowed a combined 45 points in their last three games, all resulting in Seattle victories. If we look at DVOA, Seattle ranks sixth overall, while Arizona comes in at 30th. That’s a significant disparity that pushes us to take the Seahawks, especially when you get them at such a good price. 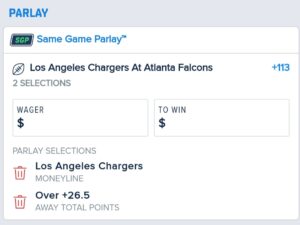 The Chargers are in a great spot coming off their bye week, as they take on an abysmal Falcons pass defense that has just gotten shredded in consecutive games by P.J. Walker and Joe Burrow. This is a terrific opportunity for Justin Herbert to have a blowup game, as Atlanta ranks 30th in defensive pass DVOA.

Even without Mike Williams, we should see the Chargers move the ball at will, eclipsing their team total and securing a much-needed road win against an inferior opponent. Los Angeles needs to keep pace with the Chiefs in the AFC West, so this is a huge game for them. I expect a strong effort coming off their bye.

The one concern here is that the Chargers struggle at defending the run, ranking 23rd in rush DVOA, while the Falcons have a strong running game, coming in at 10th in this category on offense. However, I think that Los Angeles will pour on points through the air and it’s going to be difficult for Marcus Mariota to keep pace with Herbert and company.