We’re down to the final week of the NFL season. It’s been a highly profitable year for our parlays, but it’s time to finish strong.

Let’s get back in the green in our Week 18 NFL parlays.

NFL Week 18 odds used in these parlays are current as of Thursday, Jan. 5, at Caesars Sportsbook. 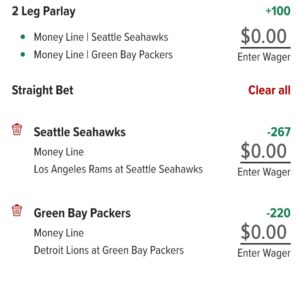 We have the ideal parlay to start off Week 18, featuring two teams in must-win situations. Not only that, but we also have strong correlation with these two outcomes.

The Seahawks can qualify for a wild card spot if they win and the Packers lose to the Lions. They’re in a good spot against a Rams team that is simply playing out the year with Baker Mayfield under center.

Here’s the catch: if Seattle wins, that would eliminate the Lions from contention. Since Detroit plays Green Bay on Sunday night, they will be aware of the outcome from the Seahawks’ afternoon game.

In other words, the Packers would then be facing a Lions team with nothing to play for but pride. While we can expect Detroit to continue playing their starters, it’s definitely a favorable situation for Green Bay.

Instead of facing a division rival desperate for a win to lock in a playoff spot, they’d be playing a team that has been eliminated from contention.

In addition to this correlation, the Packers have been rolling lately, coming off a blowout win over the Vikings. I think they’ll win regardless, but facing a potentially eliminated Lions team is an added bonus.

Roll with the Seahawks and Packers on the moneyline in our top NFL betting pick. 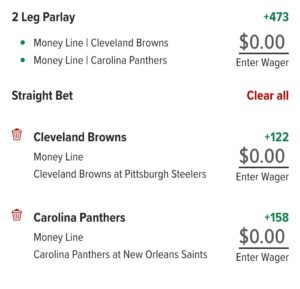 The Browns will look to finish their year with a 3-2 stretch since Deshaun Watson was reinstated from suspension.

While Watson has struggled in his return, we can attribute that to rust, given his long layoff. He’s coming off his best game in the win against the Commanders.

Watson threw for 169 yards and three touchdowns on 9.39 yards per attempt. He was able to find Amari Cooper for two 30-plus-yard scores.

This is the offense that the Browns envision under Watson: run-heavy with shots downfield. I’ll take Cleveland with their quarterback advantage over Kenny Pickett and the Steelers.

To finish it off, we’ll ride with the Panthers, who are live dogs on the road against the Saints. Carolina has gone 4-3 in their last seven games, as Sam Darnold has been competent at quarterback.

The Saints have played well, too, winning three in a row, including an impressive road victory against the Super Bowl-contending Eagles.

However, we’re getting terrific value here at +158 odds. In a game between two below-average quarterbacks in Darnold and Andy Dalton, I’ll take my shot on the underdog.

The angle behind this Same Game Parlay is simple: the Jaguars are the better team right now (winners of five of their last six) with a significant quarterback advantage.

Trevor Lawrence looks like he’s blossoming into the star quarterback Jacksonville envisioned when they selected him first overall in the 2021 draft.

The Titans will be rolling with Joshua Dobbs, who performed better than Malik Willis last week but is still a career backup with limited experience.

Add in home-field advantage, and it’s tough to see the Jags squandering this opportunity.

We’ll add in the Over because of how well Lawrence has been playing. It’s a good matchup against a Titans defense that ranks 28th in Pass DVOA, per Football Outsiders.