The New York Giants and Philadelphia Eagles face off in a clash of NFC East rivals in the NFC Divisional Round.

The Giants will look to continue their improbable run throughout the playoffs, while the No. 1 seed Eagles will try to take care of business at home.

It should be an interesting matchup, giving us opportunities to shoot for higher payouts with parlays. Let’s dive into the best parlays for the Giants vs Eagles.

NFL Divisional odds used in these parlays are current as of Thursday, Jan. 19, at Caesars Sportsbook. 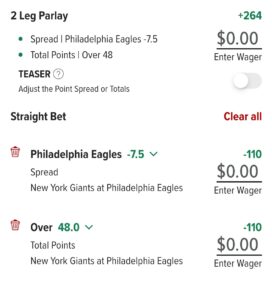 The Giants are going to have a difficult time slowing down the best running game in football. According to Football Outsiders, New York ranks 32nd in run defense (DVOA) and Philly comes in 1st at rush offense.

Let’s rewind back to their Week 14 matchup, where the Eagles won, 48-22. Miles Sanders rushed for 144 yards and two touchdowns (8.5 YPC) and Jalen Hurts added 77 yards on seven carries.

While New York was able to knock off the Vikings, they had the benefit of facing one of the worst defenses in the NFL. Now, Daniel Jones will have to handle the top pass defense in football.

Add in the fact that Philly is coming off a bye week, which could help with Hurts’ health concerns, and you have a tough spot for the Giants.

We’ll take the Eagles -7.5 and Over 48 points because the favorite correlates with the Over. I don’t expect the Giants to be able to contain this offense. 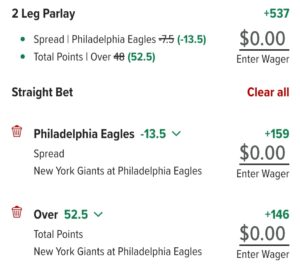 We’ll tease the Eagles and the Over at a less favorable number for a better payout. We’ve seen Philly blow out this Giants team in a 48-22 road win in Week 14.

I wouldn’t worry about the 22-16 result in Week 18. For one, that was Hurts’ first game in a couple of weeks, as he returned from injury.

Secondly, the Eagles jumped out to a 19-0 lead before taking their “foot off the gas" as they held on to a six-point win.

We also have to acknowledge that Lane Johnson will be back for this game, allowing the best offensive line in the NFL to be back at full strength.

We’ve seen Philly impose their will on opposing defenses through their running game. They also have an elite trio of pass catchers in A.J. Brown, DeVonta Smith, and Dallas Goedert.

This team is a powerhouse and we could absolutely see a high-scoring blowout here, similar to the Week 14 result.