We’re onto the second round of the NFL playoffs with the Divisional matchups. We’ve got four games to choose from, giving us plenty of options at our disposal.

Let’s keep it rolling in our Divisional playoff builds.

NFL Divisional Round odds used in these parlays are current as of Tuesday, Jan. 17, at Caesars Sportsbook. 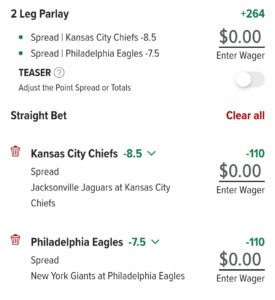 Our top NFL parlay consists of two major mismatches, where the favorites have a good chance at double-digit victories.

The Jaguars rank No. 30 in Pass DVOA on defense, per Football Outsiders. That’s bad news for them, as they take on a Chiefs team that ranks No. 1 in Pass DVOA on offense.

Patrick Mahomes has had an MVP-caliber season, throwing for 5,250 yards with 41 touchdowns and 12 interceptions. He should be able to have his way with this Jaguars defense.

When these two teams met in Week 10, Mahomes threw for 331 yards at 9.1 yards per attempt, finishing with four touchdowns and one interception. The Chiefs won 27-17, but it was never in doubt — Jacksonville got a late touchdown to cut the lead to 10.

The Eagles host the Giants in a matchup between two NFC East rivals. Philly has the best rushing offense in the NFL, while the Giants rank last in run defense, per Football Outsiders.

We’re likely to see a refreshed Jalen Hurts off the bye week, so we can expect the Eagles to find success on the ground in this matchup. When Philly is able to run the ball efficiently, it makes it even more difficult for opposing teams to slow down A.J. Brown, DeVonta Smith, and Dallas Goedert.

The Giants have exceeded the wildest expectations this season, but they’re overmatched against the Eagles.

Ride with these two favorites in our top NFL betting pick. 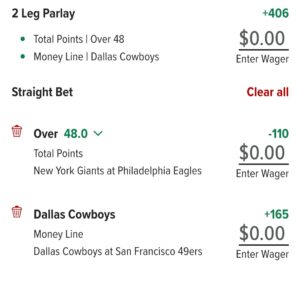 We start off our longshot parlay by targeting the Over in Giants vs Eagles. This game feels like it could be similar to their Week 14 matchup, where Philly won 48-22.

Lane Johnson is back for the Eagles, solidifying what is the best offensive line in the NFL. Look for Philly to approach 30 points in this one.

We also have to acknowledge how good the Giants’ offense has been lately, namely in their 31-24 upset win against the Vikings. Daniel Jones is playing at the highest level that we’ve seen from him, and Saquon Barkley has been running well.

We saw how dominant the Cowboys can be when Dak Prescott is rolling, evidenced by their 31-14 blowout victory over the Bucs. I’m riding with the quarterback advantage with Prescott over Brock Purdy.

Purdy has been phenomenal for the 49ers, but we have to remember that this is still a seventh-round rookie. It’s important to note that San Francisco has had a pretty soft schedule during his tenure.

In each of those matchups, the 49ers almost always played with a lead. We haven’t seen Purdy in a situation where he has to play from behind.

This will be the rookie’s toughest test in dealing with one of the best defenses in the NFL. Expect the Cowboys to pull off the upset. 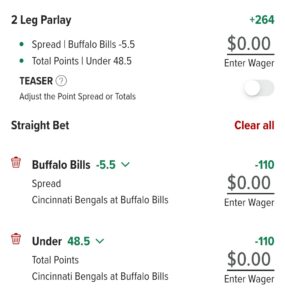 We’re riding with the Bills and the Under in this Same Game Parlay for one simple reason: the Bengals are currently decimated on the offensive line.

The team is dealing with injuries to Jonah Williams and Alex Cappa, two key cogs up front. That’s bad news against a Bills defense that ranks ninth in Pass DVOA.

We just saw Cincinnati narrowly edge Tyler Huntley and the Ravens, requiring a fumble-six from their own one-yard-line to win by a touchdown.

I expect Joe Burrow to be under consistent duress in this game, making it difficult to keep pace with Josh Allen and company.

Look for the Bills to win by 10+ with the game staying Under the number.