It’s time for the third round of the playoffs with the NFL Conference Championship matchups. We’ve only got two games to target, so we’ll have to get a bit more creative this week.

After a strong showing during Wild Card Weekend, we hit a wall in the NFL Divisional Round, going 0-3 (-6 units). However, we’re still up over 18 units on the year.

Let’s bounce back in our Conference Championship playoff builds.

NFL odds used in these parlays are current as of Friday, Jan. 27, at Caesars Sportsbook. 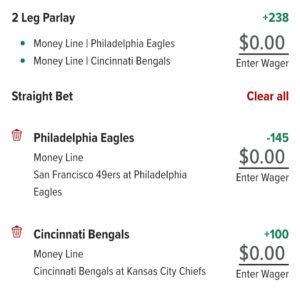 Our top NFL parlay consists of the Eagles and Bengals due to their edge at quarterback.

The Eagles rank No. 1 in Pass DVOA on defense, per Football Outsiders. They’re likely to make it difficult on rookie quarterback Brock Purdy in this game.

This is bad news in this matchup because the 49ers will have to try to keep pace with Philly’s high-flying offense.

It may be tough for them to do so through the air, so they’ll need to rely on their running game to keep the Eagles offense off the field.

The problem with that is the Eagles’ run defense has been much improved lately, allowing only 4.08 yards per carry (12th) since Week 10.

Add in home-field advantage, and it’s clear why the Eagles have the edge in this one.

You may ask yourself, how do the Bengals have the advantage at quarterback when they’re facing Patrick Mahomes?

The answer is simple: Mahomes is clearly not 100 percent right now as he deals with a high ankle sprain. This injury can limit his effectiveness as a passer while also taking away his mobility.

We’ve seen significant line movement with this game. It went from the Chiefs to the Bengals and back to Kansas City as favorites. This was because Mahomes was able to get in a full practice.

However, I still don’t buy that the star quarterback will be at full capacity. When you add in the fact that the Bengals have been successful against the Chiefs, winning their last three matchups, you come away feeling confident with a Cincinnati win.

We’ll go with the Eagles and Bengals in our top NFL betting pick. 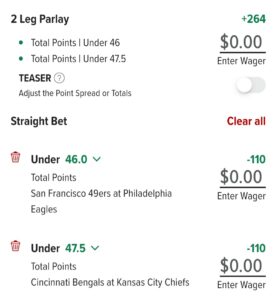 There’s not much room for a long shot with a large payout with only two games on the slate, so we’ll have shorter odds than usual with this week’s selection.

We spoke about how the 49ers should utilize a run-heavy game plan against the Eagles. That bodes well for the Under, as it can result in longer possessions that chew up time off the clock.

It’s also worth noting how dominant the 49ers’ defense has been this season, ranking fifth in Pass DVOA and second in Rush DVOA.

Look for San Francisco to do just enough to slow down the Eagles’ offense, keeping this game Under the total.

We’ll include the Under in the Bengals-Chiefs to finish off this parlay.

This pick is entirely due to Mahomes’ health. It’s likely that we’ll see a drop-off in his efficiency, perhaps resulting in more check-downs.

That would mean fewer big plays and longer drives, making it more difficult to push this Over the number.

Add in the fact that Bengals’ defensive coordinator Lou Anarumo has his unit playing at a high level and you see an easy path to the Under here. 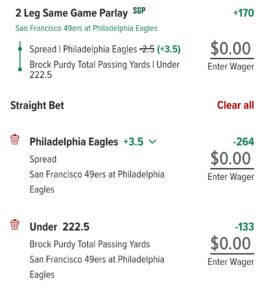 I believe that the 49ers can keep this game close, but I can’t see them winning by more than a field goal on the road in a tough spot.

We’re getting the Eagles past the key number of three here, making it an appealing choice for our same-game parlay.

It’s also going to be tough for Purdy to get Over this number in passing yards because it’ll be a run-heavy game plan against the best pass defense in the NFL.

Expect a close game that is relatively low-scoring. This could be the game where Purdy starts to look more like a rookie.