What once looked like one of the highlights of Wild Card Weekend is now in danger of being relegated to nothing more than a blowout. This all-AFC North matchup between the Ravens and Bengals will soon be played without Lamar Jackson, who has been ruled out.

Still, there are some great ways to bet on this game, namely by shooting for the moon with a few parlays. If you’re looking to have some fun this Sunday night, this is the way to go.

NFL Wild Card odds used in these parlays are current as of Wednesday, Jan. 11, at Caesars Sportsbook. 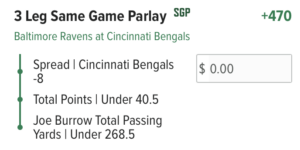 The line has moved from 6.5 points to 8 in favor of the Bengals, and it’s not hard to see why. With Jackson missing this weekend’s action, Baltimore’s chances of victory are sinking fast.

As such, backing Cincinnati to cover the 8-point spread — at home, no less — feels like a gimme. The Bengals just took them down 27-16 in Week 18, and we could see an even more dominant showing from Joe Burrow and co. with the stakes raised.

With that said, the Under seems like the right play here, even at 40.5 points. A more conservative game plan will be in line for Cincy, and it wouldn’t shock me to see Baltimore put up even fewer points than it did last week.

The Bengals know what to expect now, and it isn’t much.

In line with that thinking, it makes sense to take the Under on Burrow’s passing yards. Although he’s surpassed this line in nine of his 16 appearances this season, he went for 215 and 217 in two games against the Ravens.

Alternatively, you can also look to back the Over on Joe Mixon‘s carries, but there’s a chance that Samaje Perine could eat into that number if the game becomes uncompetitive. 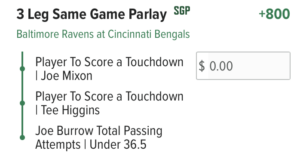 I’m going props-only for my longshot parlay on the off-chance that this game ends up being closer than anticipated. Nonetheless, we can get (+800) odds by betting this parlay, which is more than solid value.

Mixon has only recorded a touchdown in five different games this season, but fortunately for us, one of those came against the Ravens. He ran for one vs Baltimore in Week 18 to cap off what was otherwise a quiet year for him in terms of rushing scores.

Nonetheless, he could get several opportunities to pick up another should the Bengals opt to slow this game down, particularly in the second half.

I also like Tee Higgins to score a touchdown in this game. The third-year wideout had logged at least one in four straight games before hauling in just one reception in Week 18, and Cincinnati will want to get him on track to have another big postseason.

With most of the attention on Ja’Marr Chase, Higgins could easily sneak one in early in the game.

Finally, I’m adding Burrow to finish with fewer than 36.5 passing attempts. This has only happened in six of his 16 games this year, but one of those came against the Ravens in Week 5, which is worth keeping in mind.

Burrow won’t need to show off much of his arm talent to lead the Bengals to victory in this contest, and I don’t expect him to, either.