The Buffalo Bills and Cincinnati Bengals will square off in a highly anticipated divisional round playoff game Sunday in Orchard Park, New York.

With just one game in the Sunday afternoon window, there is a perfect opportunity to create a same-game parlay. Here is a look at a couple of our favorites.

NFL divisional round odds used in these parlays are current as of Wednesday, Jan. 18, at BetMGM Sportsbook. 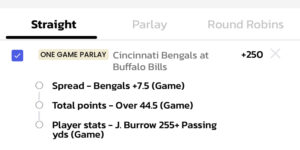 If you read my Bengals vs Bills prediction, you know I think the Bills will win a close, high-scoring game. This teased parlay gives bettors an enhanced opportunity of each leg hitting while still producing long odds — a $100 bet would fetch $250 in profit.

If there is any hesitance in betting Burrow to put up a big passing number, remember the Bengals QB had 52 passing yards in less than a quarter before the teams’ initial game was canceled due to Damar Hamlin‘s cardiac arrest. 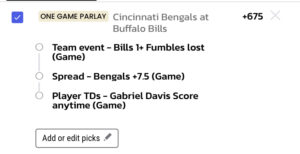 There are a few needles to thread here, but Davis has scored in each of his past three playoff games and has six TDs in that span.