A longtime marquee NFC rivalry resumes when the San Francisco 49ers host the Dallas Cowboys in the NFC Divisional Round on Sunday at 6:30 p.m. ET. Dallas has won five of the eight postseason meetings between the teams, but San Francisco eliminated the Cowboys in last season’s Wild Card round, 23-17.

San Francisco has won 11 consecutive games heading into the second round of the playoffs, while Dallas has won seven of its last nine. The Cowboys last advanced to the NFC Championship Game in 1997 and Dallas has lost its last five NFC Divisional Playoff Games.

The 49ers are favored to win by four points, and this matchup pits a rookie QB who has never lost in six starts against a veteran passer looking to even his postseason record at 3-3. More importantly, Dak Prescott wants to prove he can take the Cowboys on their first deep playoff run since the glory days of the 1990s.

NFL Divisional Round odds used in these parlays are current as of Wednesday, Jan. 18, at Caesars Sportsbook. 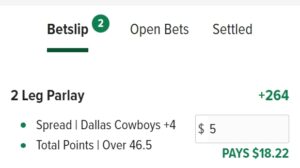 The 49ers had the highest margin of victory in the regular season at +10.6, which increased to +13.7 in home games. But Dallas’ two losses before Week 17 (which I am writing off since they could not really improve their playoff seeding) were by three and six points, and both came in overtime.

Dallas is the best offense that San Francisco will have faced since its last loss when it gave up 44 points to Kansas City in Week 7. The Cowboys averaged 27.5 points per game during the regular season, which was fourth in the NFL and two spots higher than the 49ers (26.5) in terms of league rankings.

The Dallas offense will hang right with San Francisco’s bevy of playmakers and can score enough points against a formidable, but not total shutdown defense.

The 49ers ranked 20th in pass defense during the regular season and allowed 17 first-half points to Seattle in the Wild Card Round and 34 to the Raiders in Week 17.

The Cowboys and 49ers have too many playmakers to not want to tease the Over past the original projection. I am expecting to see both CeeDee Lamb and Christian McCaffrey landing in the end zone.

Prescott has a prime weapon in Lamb to attack the 49ers’ pass defense, and he spread the ball around to eight different pass-catchers against the Buccaneers. Brock Purdy has been on a magical run, but I do think it ultimately comes to an end in the game’s key moments against this Dallas defense.

The Cowboys led the NFL in takeaways with 33 during the regular season, and they were third in sacks with 54. Purdy won’t be able to build a comfortable lead and is truly going to feel the heat of the Dallas defense during the game’s critical moments as he finishes with a quality stat line but loses the game.