We won’t have to wait long for the first NFC North clash of the 2022 NFL season, as Aaron Rodgers and the Green Bay Packers visit Kirk Cousins and the Minnesota Vikings in Week 1.

The Packers have dominated the division over the last decade, winning seven of the last 10 NFC North titles (including three straight) and are favored to do so again this season. Minnesota is the team most likely to dethrone Green Bay, and this game should give us an early indication of the Vikings’ chances.

This should be a great matchup to kick off the FOX Sunday late afternoon slate, so let’s dive into our Green Bay vs Minnesota predictions.

The Packers are currently installed as short road favorites in this matchup. The total is set at 47 points, which has come down a bit but adds up since the two teams combined for exactly that number in their last meeting in January.

Take a look at the best Packers odds and Vikings odds for the 2022 NFL season.

Bookmakers are expecting a close matchup between these two NFC North rivals to start the season, with the Packers ultimately pulling this one out.

Packers vs Vikings Pick of the Day

Read more on this Packers vs Vikings bet below.

This will be Aaron Rodgers’ first game without wideouts Davante Adams and Marquez Valdes-Scantling after both found new teams this offseason. The four-time NFL MVP will also face the pass-rushing prowess of Za’Darius Smith, who signed with the Vikings after getting cut by Green Bay for salary cap reasons.

Minnesota starts the season with minimal changes on offense, as running back Dalvin Cook will be the focal point and wide receivers Justin Jefferson and Adam Thielen should see the lion’s share of targets from Kirk Cousins.

On the other side of the ball, the Vikings spent most of their 2022 draft capital on defense and their top two picks — S Lewis Cine and CB Andrew Booth Jr. — will see some snaps in the secondary. How well they and the rest of the defensive backs hold up against Rodgers and co. will likely determine the outcome of this one.

While the coaching staff and scheme will be different this year, the Vikings bring back plenty of continuity on offense in terms of talent. That should give them an advantage in Week 1, especially when you contrast that to the situation in Green Bay.

The Packers will likely lean on their two-headed rushing attack of Aaron Jones and AJ Dillon, which should have success against the Minnesota defense. However, Rodgers will have to rely heavily on Allen Lazard in the passing game as he builds chemistry with his new receivers.

The Vikings should have no such issues, even as they adapt to Kevin O’Connell‘s offense. The former Rams OC is expected use Jefferson in a Cooper Kupp-like role, which could take this offense to another level this season.

Minnesota and Green Bay split their two meetings last season, with each team winning on their home turf. I expect the Vikings to get the job done for their new coach in Week 1.

Minnesota is the one team in the NFC North that has given Green Bay some issues in recent years, boasting a 7-5-1 straight up record against the Packers over their last 13 meetings… The Vikings had a 2-1 record as home underdogs last season, while Green Bay was 2-3 against the spread as a road favorite… Minnesota’s games had the highest percentage towards the Over of any team in the NFL last season (64.7%).

This spread is tailor-made for a teaser, but I’m going to take a shot on the Vikings to get the outright win here as short home underdogs. Minnesota has the offensive talent to trouble the Packers’ defense and now has a coach that can scheme players open and get the most out of those skill players.

I think the Vikings could mount a surprise challenge for the NFC North title this year, and starting out with a victory over the rival Packers would be a good step in the right direction.

Before placing this bet, get the best Minnesota Vikings promo codes.

Minnesota should have success on offense as well, leading to another Over in one of their games.

Before placing this bet, check out the best Green Bay Packers promos.

If O’Connell is really going to turn Jefferson into his new Cooper Kupp, then the third-year pro should be getting an upgrade in red-zone targets. Jefferson led the Vikings with 20 targets inside the 20 last season, but that paled in comparison to Kupp’s 37, which led the NFL.

Don’t be surprised to see the LSU product start the season in the end zone. 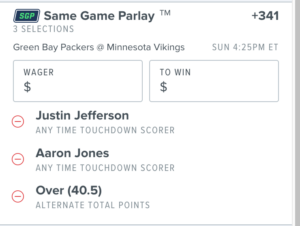 This game could go either way, but I believe we’ll see plenty of scoring. For our SGP, we’re going to tease the total down a bit through a few key numbers, while adding in a touchdown scorer from both teams.

Jones is a threat out of the backfield as both a runner and receiver. He caught 12-of-15 red-zone targets last season — second on the team behind Adams — and should see increased opportunities with the star wideout now in Las Vegas.