The Washington Commanders, fresh off a rousing 28-22 win over the Jacksonville Jaguars in their opener, travel to Motown to take on the Detroit Lions in this Week 2 NFC clash. The Lions’ 38-35 loss in Week 1 against the Eagles unfolded like several in their 2021 season did — Detroit had some trouble defensively, fell behind by a significant margin, and then mounted a valiant comeback that just fell short.

The two teams have expectations of significant improvement for the 2022 season. Washington believes it has found a long-sought-after answer at quarterback in Carson Wentz, while Detroit upgraded the offensive personnel around Jared Goff this offseason and also believes it can make strides on defense.

This should be an intriguing early-season matchup where the points pile up on both sides, so let’s dive right into our Commanders vs. Lions predictions and picks.

The spread for this game has taken a fascinating turn since Sunday’s outcome. It originally opened with the Commanders as the modest road favorites this offseason, but the Lions’ late-game performance in Week 1 made all the difference in the minds of the public, with Detroit now the small home favorite.

Take a look at the best Commanders odds and Lions odds for the 2022 NFL season.

Oddsmakers clearly have some faith in the Lions’ offense in this spot, with the fact Detroit was able to get its running game going against the Eagles and Washington’s own struggles containing Jacksonville on that front likely playing a part.

Commanders vs Lions Pick of the Day

Read more on this Commanders vs Lions bet below.

Wentz got his Commanders tenure off to a strong start overall against Jacksonville, even though he was guilty of two interceptions. The veteran ultimately threw for 313 yards and four touchdowns, an even more prolific debut overall than the one he enjoyed with the Colts in Week 1 last season (251 yards, two TDs).

The Commanders afforded Antonio Gibson a true workhorse role with 21 total touches against Jacksonville. The 24-year-old finished as the leading receiver on the day for Washington (7-72), and both he and the similarly versatile Curtis Samuel (72 total yards on 12 touches) could be just the type of players that confound a Lions’ defense that yielded 455 total yards to Philadelphia.

Detroit’s offense could have its share of success as well against a Washington defense that gave up 19 second-half points to Jacksonville. The Jags gained 6.8 yards per carry versus the Commanders overall.

I frankly expect this game to be a wild back-and-forth affair that could be right up there with the highest-scoring contests of the week, given that both offenses have plenty of playmakers and each defense certainly has soft spots that can be exploited. As such, the old cliche of a handful of plays deciding this game could very well apply.

Both squads should find success in achieving and maintaining balance on offense, which is key to sustained scoring.

As already noted, Washington was able to overwhelm Jacksonville with a host of playmakers that included productive rushing performances from Gibson and Curtis. Then, the pass-catching arsenal of Gibson, rookie Jahan Dotson, Terry McLaurin, and even the returning Logan Thomas helped Wentz to his prolific passing total.

The Lions will counter with the likes of Swift, Jamaal Williams, D.J. Chark, Amon-Ra St. Brown, and T.J. Hockenson, essentially matching the Commanders weapon for weapon. However, Detroit appeared to play things a bit more conservatively through the air in Week 1, with Goff averaging just 5.8 yards per attempt and not really getting going until later in the game.

Ultimately, I see the Commanders being able to do just a bit more offensively and also displaying a bit more defensive prowess than the hosts leading to the narrow victory.

If looking at 2021 numbers, one would be tempted to roll with the Lions in this spot.

Washington was 4-5 straight up on the road last season and a respectable 4-4-1 against the spread in that split, but just 2-4-1 versus the number as a road underdog, specifically.

Meanwhile, Detroit recorded all three of its wins at home in 2021 and was an outstanding 11-6 against the spread overall, including 6-2 at home.

However, the Lions are in uncharted waters as home favorites in the Dan Campbell era, and every season is naturally different. With what is arguably at least slightly more cumulative talent, there’s a case to be made here for the Commanders putting a ding into Detroit’s strong ATS numbers.

As already elaborated on, the Commanders appear to have the offensive weaponry, in particular, to attack the Lions from every possible angle. When coupled with what should still be a solid defense despite some of its second-half Week 1 issues, Washington has the all-around tools to prevail in a close game.

The importance of a healthy Samuel can’t be overstated, either. The flexibility he offers Offensive Coordinator Scott Turner not only opens up the playbook a good bit, but it also has the potential of a positive domino effect on the rest of Samuel’s fellow skill players, making the entire unit that much more effective.

The Over was just 4-4 in the Lions’ home games a season ago, but the Ford Field fast track and the team’s improved offensive weapons should help lead to Detroit making a good bit more contributions to the scoreboard in 2022. That much was already evident in Week 1 against what is believed to be a solid Eagles defense.

The Commanders also have plenty of weapons as already noted, and Detroit’s defense gave up a co-NFL-high 394.6 total yards per game at home a season ago. With Philadelphia racking up 455 total yards on its way to 38 points in Week 1, it appears the Lions still have some work to do on that side of the ball.

Specific props will be released later this week, but this is one I would begin contemplating early in the week. The Commanders put the ball up 41 times overall in the opener, and Wentz displayed very good command of the offense while connecting with seven different targets overall and four touchdown tosses.

The likes of McLaurin, Dotson, and Samuel, not to mention Gibson and Thomas, give Wentz a richly diverse array of weapons that can strike from anywhere. Although Detroit didn’t give up any passing touchdowns in the opener, Washington boasts a deeper pass-catching corps overall than Philadelphia and isn’t as likely to have Wentz vulture a red-zone opportunity on the ground as Jalen Hurts did in Week 1.

Commanders Moneyline and Over 48.5 points (+305) at WynnBET Sportsbook 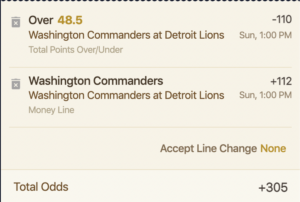 In line with my previous predictions of an outright upset by Washington in a high-scoring, close game, I like this parlay at a very appealing price. Going with the cover instead of the straight moneyline bet in that portion of this bet would also net a solid +264 price for those that want to hedge their risk just a bit.

Juan Carlos Blanco has been playing fantasy sports since 1997 and actively writing about the fantasy sports and sports betting industries since 2015 for multiple websites. He has covered a wide variety of professional sports leagues, including the NFL, MLB, NBA, CFL, Arena Football League, Alliance of American Football, XFL, NPB and KBO. He was the recipient of the FSWA's 2016 Newcomer of the Year award for his work with RotoWire.