Indianapolis debuts its QB upgrade from Carson Wentz: Matt Ryan will make his regular-season start under center for Indy, aiming to provide the Colts with a better pass game to complement an elite rushing attack, led by Jonathan Taylor.

Houston, meanwhile, stuck with QB Davis Mills despite opportunities to replace him in free agency and the NFL Draft. The sophomore looks to build on fleeting rookie-year success and help Houston show more punch on offense.

This divisional assignment likely won’t steal the spotlight from other marquee NFL Week 1 matchups. Still, let’s see how we can make some money from Indianapolis vs Houston betting picks.

NFL odds references in the article are current as of Friday, Aug. 12, 9 a.m. ET.

Though a double-digit spread would be the knee-jerk expectation in these situations, the bookmakers give credit to the home team in the division game.

Indy also finished top-10 last year with a +5.1 scoring margin. Houston tailed in 30th at -10.1, so operators are giving them a smidge better forecast at home.

Colts vs Texans Pick of the Day

Read more on this Colts vs Texans bet below.

Despite their flashes of brilliance on both sides of the ball, Houston ranked near the bottom in many defensive categories — especially in run defense, allowing 4.6 yards per carry and 142.2 rush yards per game, the second-highest total.

Meanwhile, Mills likely will face plenty of danger in the pocket; the Texans’ offensive line does not match up well with the Colts’ defensive line, led by DT DeForest Buckner and a potential revival case in pass-rusher Yannick Ngakoue.

Ryan, Taylor, Hines and Michael Pittman will allow the Colts to control this contest most of the way.

However, Mills will prove competent enough for a garbage-time touchdown to topple Colts ATS bettors.

Personnel mismatches aside, Houston should sneakily keep this one close — maybe not for a large chunk of the game, but when it counts.

Despite their horrid 4-13 record last year, Houston finished a lame but not horrible 8-9 versus the spread in 2021 — including 5-4 ATS at home, tied for the sixth-best mark.

Plus, Mills has played significantly better at NRG Stadium, thriving with a 69% completion rate and 12:1 TD:INT in his friendly confines, compared to 63% and 4:9 elsewhere.

Indianapolis and Houston tied at 8-9 on the Over/Under but still ranked in the league’s top half in that category.

My backdoor cover prediction pushes me to take the points for the home ‘dog. However, Texans vs Colts bettors should bail in the event these Texans odds against the spread creep more strongly toward Indy’s favor.

This unfortunately dipped from the previous (+145), but I’ll play with this wide margin to squeeze more profitability from a Colts win than the moneyline offers.

The talk of Hines being more involves does not throw me off of Taylor. Most weeks, both tailbacks will be involved, with Hines’ activity likely coming at the expense of secondary Colts wideouts playing behind Pittman.

Indy will likely be hitting the ground for much of the second half to help run down the victory. 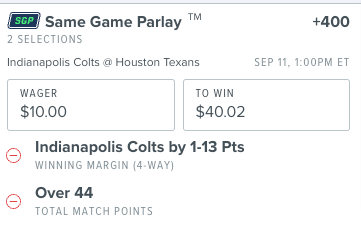