The Kansas City Chiefs and Arizona Cardinals open up their 2022 NFL season in a potential shootout between two of the most dynamic offenses in football.

Both teams will be playing without their number one wideouts from last year. The Chiefs will have to adapt to life without Tyreek Hill, while the Cardinals need to weather the storm during DeAndre Hopkins‘ six-game suspension.

Kansas City has poured resources into this position to make up for this loss, signing free agents JuJu Smith-Schuster and Marquez Valdes-Scantling while also drafting Skyy Moore in the second round. Meanwhile, Arizona has re-united Kyler Murray with his college teammate, Marquise Brown.

Despite losing Hill, the Chiefs continue to be projected as one of the best teams in the league, ranking third in odds to win the Super Bowl. On the other hand, the Cardinals have an 8.5-win total, demonstrating that these are two teams headed in opposite directions.

The NFL odds aren’t surprising here, with the Chiefs as road favorites because they’re the better team. Points should come in abundance with two fast-paced teams - even without Hill and Hopkins.

e a look at the best Chiefs odds and Cardinals odds for the 2022 NFL season.

Bookmakers don’t seem concerned with the Chiefs’ offense because Patrick Mahomes is the best quarterback in the NFL. They project a relatively close game with Kansas City escaping Arizona with a victory in a high-scoring affair.

Chiefs vs Cardinals Pick of the Day

Read more on this Chiefs vs Cardinals bet below.

The key question in this game is how are the Cardinals going to slow down Mahomes? The Chiefs have an elite offensive line, led by stalwarts like guards Joe Thuney and Trey Smith, as well as center Creed Humphrey. It’s going to be difficult for Arizona to generate a pass-rush against this strong unit.

This is compounded by the fact that top edge-rusher Chandler Jones departed for Las Vegas in free agency. To make matters worse, the team did nothing to replace him. They’ll have to rely on Markus Golden and J.J. Watt to turn in productive seasons to help fill the void, with the former listed as a game-time decision for this game.

The Chiefs’ offensive line vs the Cardinals’ pass-rush is the key mismatch here.

Simply put, it’s going to be tough for Arizona to win this game while Mahomes has time to go to work in the pocket. There isn’t enough talent on this Cardinals’ defense to make up for the loss of Jones. When you give a quarterback like Mahomes strong pass protection, he’s likely to pick apart your defense.

We also have to consider the improvements in Kansas City on defense. While they lost veteran defensive back Tyrann Mathieu in free agency, they used both first-rounders on this side of the ball, selecting pass-rusher George Karlaftis and cornerback Trent McDuffie. This is an improved unit that adds more balance to the team.

Then you look at the Cardinals’ offense, and you see a group that could struggle early on, especially without Hopkins. While Hollywood Brown will fit right in, they also lost wideout Christian Kirk and running back Chase Edmonds. They’ll need Rondale Moore to take the next step as a receiver, with Eno Benjamin helping to spell James Conner.

Look for the Chiefs to start off their year with a win against a declining Cardinals team.

We’re getting a decent price on Kansas City with the 5.5-point spread since they’re on the road. Don’t put too much stock into home-field advantage here and ride with the better team.

There are also some interesting trends to make note of, such as:

We’re laying the points with Kansas City since it’s a reasonable line where all we need is a win by six or more. The Chiefs are Super Bowl contenders, with an elite quarterback, strong offensive line, and improved defense. The Cardinals look destined to finish third in the NFC West.

Look for the offensive line to do a terrific job providing pass protection for Mahomes, allowing him to shred this Cardinals defense. Expect the offense to look more balanced this year with Mahomes spreading it around and the team establishing the run with Clyde Edwards-Helaire.

Arizona will need to lean heavily on Brown, Conner, and Zach Ertz unless Moore can emerge as a viable third target in the passing game. There’s simply not enough firepower without Hopkins to match up with the Chiefs. Exploit the inflated value imposed by the home field and take the Chiefs -5.5.

Before placing this bet, get the best Kansas City Chiefs promo codes.

This number is a bit too high, undervaluing the limitations of the Cardinals’ offense in its current state. While Brown has a lot of potential, it’s still unclear how he’ll handle being the clear-cut top target in the passing game. He may need Hopkins to help share the load and open up more opportunities.

The Chiefs’ defense should be better than it’s been in recent years. This is what happens when you use both of your first-round picks on this side of the ball. We could see Arizona struggle to score points to keep pace with Mahomes and company.

While I do think Kansas City will approach 30 points in this game, I’m not convinced that the Cardinals will put up enough to push this total Over the number. The Chiefs could play ball-control and slow down the game as they protect their lead as we get deeper into the second half.

Before placing this bet, get the best Arizona Cardinals promo codes.

JuJu has the best track record of any wideout on this team. Let’s remember that he put up 111 receptions for 1,426 yards as a 22-year-old in 2018. He has a good chance to become the number-two target in this offense behind Travis Kelce.

The time to pounce on JuJu props is now because the market may not yet reflect this in their projections. Some believe that Valdes-Scantling or Moore can take away from JuJu, but the former Steeler is the best bet to lead this group. We’re rolling with the former Steeler to find the end zone in his Chiefs’ debut.

Smith-Schuster does his damage in underneath targets, so if he has a good game, it’s likely that he’s racking up catches, establishing himself as a red-zone threat. We like the value at +125 odds on the top wideout in Kansas City. 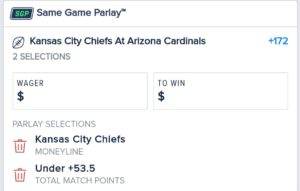 We can use our parlay as a hedge in case the Chiefs only win by five or fewer, causing our straight bet to end in a loss. The only advantage that Arizona has here is home-field, making it hard to see them knocking off Kansas City. There are not enough weapons in this offense, at least until Hopkins returns.