The College Football Playoff semifinals are set for a doubleheader on New Year’s Eve. In the Peach Bowl, we have No. 1 Georgia taking on No. 4 Ohio State, which kicks off at 8 p.m. ET on Saturday, Dec. 31.

The reigning national champion Georgia Bulldogs have stayed on track for a repeat. The Bulldogs rolled to an undefeated regular season and a decisive win over LSU in the SEC Championship earned them the No. 1 seed.

Ohio State similarly rolled through an underwhelming schedule but tripped up in the final game of the regular season against Michigan. The Buckeyes finished the season 11-1 and missed a chance to play in the Big Ten Championship.

But with a USC loss in the Pac-12 Championship and everything else falling in line, the Buckeyes earned a spot in the playoff, setting up what should be a fantastic College Football Playoff semifinal against Georgia.

The Georgia Bulldogs, NCAA’s reigning national champions, are unsurprisingly a favorite in this game with the spread opening — and holding — at 6.5 points per the Caesars Sportsbook.

The total is set at 62, a major nod of respect for the Ohio State offense against one of the best defenses in the country.

Both of these teams have experience in the CFP and were expected to be here during the preseason.

Georgia won the National Championship last season and will look to battle through the four-team College Football Playoff bracket and win their second straight title.

When the Bulldogs have needed to this season, they’ve shown up and dominated opponents.

Georgia trounced Oregon 49-3 to open the season, held then No. 1 ranked Tennessee to a season-low 13 points, and never broke a sweat in the 50-30 win over LSU in the SEC Championship.

Behind veteran quarterback Stetson Bennett, the Georgia offense isn’t flashy, but it is efficient and finished second in the SEC in total offense, and third in scoring offense.

Bennett had a career season in his first as the unquestioned starter for Georgia, completing 68.1% of passes for 3,425 yards and 20 touchdowns - including four in the SEC Championship.

He’s smart and combined with the Bulldogs’ No. 1 defense, all he needs to do is take care of the ball and not make any major mistakes.

The Georgia defense was the best in the nation last year during their National Championship run, and despite losing five first-rounders on defense alone, have reloaded.

Even against the nation’s best defense, this Ohio State offense led by C.J. Stroud has plenty of weapons and ways to beat you.

Stroud was right in the mix at the top of the Heisman Trophy odds all season long, but will likely fall short after the loss to Michigan.

But even so, Stroud had a fantastic season finishing in a tie for most passing touchdowns (37) and third in QBR (87.7).

The problem for Ohio State, at least in the loss to Michigan and historically in matchups of this caliber, was the defense.

The Buckeyes allowed 252 yards rushing in the loss to Michigan, and were susceptible to big plays on the ground and through the air allowing touchdown plays of 69, 75, 75, and 85 yards.

If the Buckeyes give up big plays on defense, it could be a long night. The Georgia defense is too good to spot points and huge plays, too.

This Georgia team was the favorite in the CFB National Championship odds for a majority of the season, and they’re able to get it done in the College Football Playoff semifinal.

Georgia may not have the flashiest offense in the country, but when they get the ball in their own territory, they’ve capitalized.

Although Georgia’s defense has been dominant this season, they did struggle at times against the LSU passing attack. And this Ohio State offense is one of the best in the country.

Ohio State’s defense was horrible against Michigan, and I believe they’re unable to correct the issues in time while Georgia rips off a couple of key plays to take this total Over.

Ohio sports betting fans can at least expect a lot of points, even with the Buckeyes as underdogs.

Ohio State probably didn’t expect to be here after losing to Michigan, and I think they come out a bit flat against the best defense they’ve played all season.

It’s clear the Ohio State defense is susceptible to big plays, and Georgia will be able to break off a couple of big plays on offense.

And unless Ohio State plays a perfect game offensively, Georgia’s defense will capitalize with turnovers and easy scores, which with this defense feels almost inevitable. 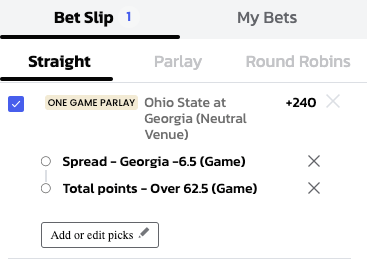 Lance Patton is the Promotions Creator & Editor for The Game Day and also creates content for the NFL, college football, and college basketball. Before joining The Game Day, Lance did freelance work for a variety of sports betting websites as well as covering the Iowa Hawkeyes for FanSided.