The game of the year in college football is here, with the #2 ranked Tennessee Volunteers taking on the #1 Georiga Bulldogs.

Georgia is the defending national champion and has opened the season with eight straight wins. There has been a couple of tough outings, but for the most part, they’ve rolled through an outmatched schedule.

The bookmakers are giving Georgia a nod of respect as a team that has played big-time football in recent history and are over a touchdown-favorite at home against the #2 team in the nation.

The total is currently set at 65.5, which is a nod of respect toward this Tennessee offense and is the highest total in a Georgia Bulldogs game since September 2018.

The oddsmakers are projecting Georiga to continue their run through the SEC and handle Tennesee, but to do so in a high-scoring affair.

Tennessee vs Georgia Pick of the Day

Read more about this Georgia vs Tennessee bet below.

The Volunteers have the nation’s best offense averaging 553 yards and 49.4 points per game and are led by the current odds-on-favorite to win the Heisman trophy Hendon Hooker.

Hooker has thrown for 21 touchdowns compared to just one interception, and his ability to make plays with his legs can not be understated. Hooker paired with sophomore Jaylen Wright (478 yards, 5 TDs) and junior Jabari Small (475 yards, 8 TDs) in the backfield gives this offense a dangerous balance.

Junior Jalin Hyatt has been Hookers’ favorite target in the passing game. He’s reeled in 45 catches for 907 yards and 14 touchdowns — including 11(!) scores in the last four games.

The problem for Tennessee lies in their opponent. Not only is Georgia one of the nation’s best defenses allowing just 10.5 points per game, but they’ve proven they have the speed and athleticism to keep up with a high-powered offense.

The Bulldogs also have a great offense, and although it is far from flashy, it has got the job done this season with a balanced passing and rushing attack. Georgia is top-5 in the SEC in rushing and passing yards per game and is third in scoring offense.

Senior Stetson Bennett isn’t going to set the stadium on fire with a bunch of deep balls and fitting passes through tight windows. But what he will do is manage this Georiga offense like a seasoned veteran.

Bennett threw two interceptions in the win over Florida but has thrown just three this season. He’ll need to take care of the ball- as he has done the last two seasons- to lead the Bulldogs to a win.

The Bulldogs’ rushing attack is also balanced, and four players have received over 40 carries. Junior Daijun Edwards is the leader. He had 106 yards and two scores against Florida, boosting his season stats to 440 yards and seven rushing touchdowns.

Consider these Tennessee vs Georgia betting trends before placing your wagers:

The Bulldogs are the more proven team, and this defense will be able to keep the Tennessee offense in check to pull away late in this game.

Georgia’s offense has been surprisingly solid this season and seems even better than last year’s national championship team. However, they do enough to get past Tennessee and hold onto their #1 ranking, covering the spread in the process.

Something has to give in this battle between #1 and #2, and I believe the Tennessee offense falters against a mean Georgia defense.

Georiga’s offense isn’t flashy, but it is competent. And Tennessee is going to struggle to slow down a balanced offensive attack. We know what we’re getting out of Stetson Bennett — he isn’t going to lose you the game, but he isn’t going to wow you either.

Tennesee has dominated other SEC foes, but Georgia outmatches them in this one.

The spread is set at 8.5 points, and although I think Georgia covers that number, this is an even better bet at +155.

If Georgia struggles to put points on the board and is forced to grind out a win late, this covers your bases.

The Volunteers could keep in this game until late, and getting the extra touchdown of points on the spread, albeit at (+155), is excellent value in this #1 vs #2 matchup. 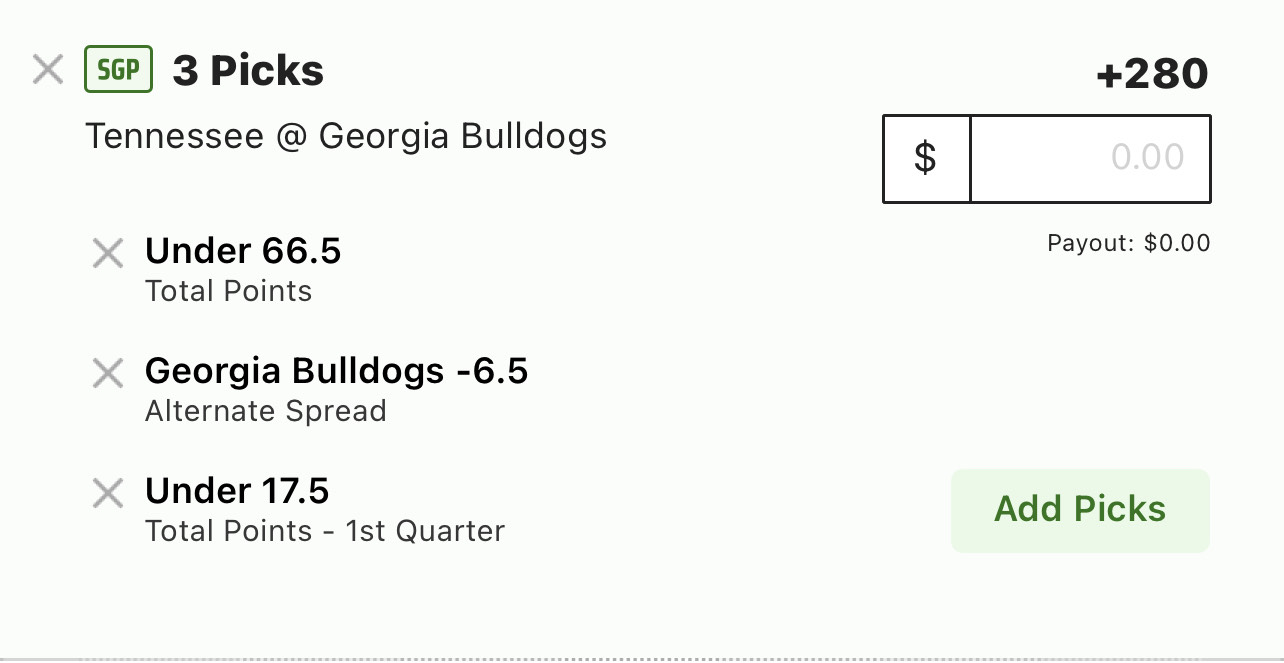 If you don’t feel confident in Georgia to cover over a touchdown, you can get a better number with this parlay.

The first quarter could include some nervous energy for both teams, and like a heavyweight boxing brawl, these two use the first quarter to feel each other out. And with the Georiga defense, that is all we need for this total to stay under.

If you believe in the defending champions to keep the pace in SEC and continue their dominant run across the last two seasons, this is an excellent parlay for you.

Lance Patton is the Promotions Creator & Editor for The Game Day and also creates content for the NFL, college football, and college basketball. Before joining The Game Day, Lance did freelance work for a variety of sports betting websites as well as covering the Iowa Hawkeyes for FanSided.